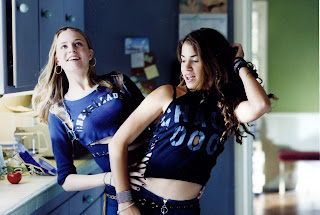 Directed by Catherine Hardwicke and written by Hardwicke and Nikki Reed, Thirteen is the story of a thirteen-year old girl who befriends a bad girl in middle school as she is introduced to the world of chaos and self-destructive behavior as she would worry her mother. Loosely based on Reed‘s own experiences, the film is a coming-of-age film that explores a young girl‘s growing pains and her mother becoming frightened by her daughter‘s behavior. Starring Evan Rachel Wood, Nikki Reed, Brady Corbet, Jeremy Sisto, Deborah Kara Unger, D.W. Moffett, Vanessa Hudgens, Kip Pardue, and Holly Hunter. Thirteen is a thrilling yet haunting film from Catherine Hardwicke.

The film follows the life of a thirteen-year old girl who goes from a sweet and caring honor student with a lot of promise who then befriends a popular bad girl as she becomes an unruly bad girl exploring sex, drugs, and alcohol much to the worry of recovering alcoholic mother. It is told in a very straightforward fashion as this young girl doesn’t just struggle with being in middle school but also the transition of growing out of an adolescent into becoming a teenager who would do wild things as she is introduced to all sorts of things by a girl who is also thirteen. The film’s screenplay by Catherine Hardwicke and Nikki Reed which is sort of based on the latter’s experiences as a young girl that is struggling to find herself in that period between childhood and adulthood as it is very confusing and volatile at times. For the protagonist Tracy Freeland (Evan Rachel Wood), she is a young woman that is full of innocence but there is something about her that is off and confused.

Notably as Tracy often feels slighted by her mother Melanie (Holly Hunter) who devotes time trying to work as a hairdresser as well as spend time with a recovering addict in Brady (Jeremy Sisto) whom Tracy isn’t fond of. When Tracy enters middle school as this epitome of goody two-shoes kind of girl, she is mocked by some of her classmates as she begs her mother to get trendy clothes to fit in. Once the popular bad girl Evie Zamora (Nikki Reed) takes notice of Tracy as well as see what Tracy does to fit in, Tracy becomes part of this clique of girls wearing racy clothing and do outrageous things. When Evie’s legal guardian Brooke (Deborah Kara Unger) goes away for a convention for a few weeks, Evie would temporarily live with Tracy, Melanie, and Tracy’s older brother Mason (Brady Corbet) for a while. Melanie reluctantly let Evie live with them as she becomes a positive maternal figure for Evie in some ways but she eventually would drive a wedge between Melanie and Tracy. The latter of which becomes more destructive and less caring as it makes everyone uncomfortable except for Evie.

Hardwicke’s direction is definitely stylized with its usage of hand-held cameras as well as create certain moods in the photography to help express the whirlwind of emotions that Tracy would go through. Shot on location in and around Los Angeles, California on 16mm film, Hardwicke would go for something that is intimate where she mainly uses a lot of close-ups as well as some medium shots to play into the family dynamic as well as the growing friendship between Tracy and Evie. While there are some wide shots, it also has this stylized approach to the way the camera moves such as the scenes of Tracy and Evie walking around Hollywood where Tracy gets really high and loses Evie who would be someplace else as Mason would make a chilling discovery of what Tracy has become. The direction also play into this air of recklessness into what Tracy and Evie would do such as the opening scene of how wild these girls are and it would return again as it shows how far Tracy has descended. By the time the film reaches its third act, the de-saturated look in the colors become less defined and moodier as it play into that descent but also some of the realities that even Melanie is unprepared for. Overall, Hardwicke creates a gripping yet visceral film about a thirteen-year-old girl trying to grow up too fast in the worst ways.

Cinematographer Elliot Davis does incredible work with the film‘s stylish photography with the usage of blue-colored filters as well as some grainy yet de-saturated look of some of the scenes set in the daytime and at night in the interior/exterior scenes. Editor Nancy Richardson does excellent work with the editing as it features a lot of stylish jump-cuts and dizzying fast cuts as it play into the craziness of what Tracy would go through as it is a highlight of the film. Production designer Carol Strober, with set decorator Donti Hurst and art director John B. Josselyn, does fantastic work with the look of the home the Freelands live in as well as some of the shops the characters go to.

Costume designer Cindy Evans does wonderful work with the costumes from the stylish clothes that Tracy and Evie would wear as well as some of the clothes that Melanie wears. Sound designer Frank Gaeta does superb work with the sound as it play into some of the chaotic moments that go on at the house and at some of the locations as well as some of the quieter moments in the film. The film’s music by Mark Mothersbaugh is amazing for its electronic-based score that features some playful melodies as it also has bits of rock and pop to play into the culture that Tracy and Evie are in while music supervisors Michelle Norrell and Amy Rosen provide a soundtrack that play into that world as it features music from Liz Phair, Clinic, Folk Implosion, MC 900 Ft. Jesus, the Like, Katy Rose, Kinnie Star and Carmen Rose, and Imperial Teen.

The casting by Jakki Fink, Shani Ginsberg, and Christina Sibul is great as it feature some notable small roles from Charles Duckworth as a teenage boy that Tracy likes in Javi, Jenicka Carey as a friend of Evie in Astrid, Cynthia Ettinger as a frequent customer of Melanie, Sarah Clarke as a family friend of Melanie, Kip Pardue as a neighbor named Luke that Evie would seduce, Vanessa Hudgens as a friend of Tracy who would be abandoned only to maintain her nice-girl persona, and D.W. Moffett as Tracy and Mason’s father who is startled by what happened to Tracy as he is unsure of what is happening. Deborah Kara Unger is terrific as Evie’s guardian Brooke who gives Evie a home and often lets her do what she wants while having a scary moment during the film’s climax as it relates to Tracy’s behavior. Jeremy Sisto is superb as Melanie’s boyfriend Brady as a recovering addict who is trying to redeem himself despite being disliked by Tracy as he becomes aware of the bad influence Evie has become.

Brady Corbet is excellent as Mason as Tracy’s older brother who has a thing for Evie but eventually becomes overwhelmed as he realizes how bad of an influence she’s become. Nikki Reed is amazing as Evie Zamora as a troubled teenager who is popular as she is quite wild and can do a lot of things as she introduces Tracy to a lot of things while being a true friend of sorts where she goes to Melanie in needing a positive maternal figure. Holly Hunter is brilliant as Melanie Freeland as a woman that is struggling to raise two kids as she is unaware of what her daughter is going through as she then becomes scared of what Tracy is becoming as she has a hard time about all that is happening. Finally, there’s Evan Rachel Wood in a phenomenal performance as Tracy Freeland as a thirteen-year old girl who goes from sweet and innocent to being unruly and unpredictable as it’s a wild and scary performance from Wood who displays all of the manic energy and terror of being a teenager.

Thirteen is a spectacular film from Catherine Hardwicke that features incredible performances from Evan Rachel Wood, Nikki Reed, and Holly Hunter. Along with an excellent supporting cast, dazzling visuals, and a fantastic music score and soundtrack. It’s a film that is quite intense as a coming-of-age drama where it does have elements that feel very real but also provide some hope about how a parent handle the growing pains of a child. In the end, Thirteen is a tremendous film from Catherine Hardwicke.

I'm so glad you chose to review this again! I love this film, I hope this is an important one teens watch for years to come.

Great review. It's funny that you posted this, because I was JUST thinking about this movie while reviewing The Edge of Seventeen. Granted, Thirteen may been teenage life on steroids, but it gave a more realistic glimpse into the harsh reality of adolescence than Seventeen did. Seventeen was such a watered-down, paint-by-numbers exploration of youth.

@Brittani-Agreed. Teenagers should see this film as it makes no bones in how bad being a teenager is and all of the growing pains.

@Courtney Young-I heard about The Edge of Seventeen as I wonder if I should see it. I'll check out your review though I'm sure it's nowhere as intense as Thirteen.