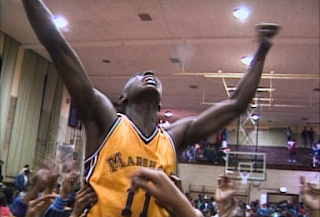 Directed and narrated by Steve James and written by James and Frederick Marx, Hoop Dreams is a film that follows the lives of two high school students from Chicago and their dream to become professional basketball players. Filmed in the course of five years as it was originally meant to be a thirty-minute short film made for PBS. The film showcases the journey of two boys in William Gates and Arthur Agee and their hopes to make it so they can use their skills in basketball to give them a better life away from the violent-ridden streets in the poor sections of Chicago. The result is a rapturous and intoxicating film from Steve James.

The film follows the lives of two kids from the inner-city areas of Chicago who both dream of making it to the NBA as a way to get themselves and their families out of the ghetto. Shot in the course of nearly five years through the entirety of these two boys life in high school where they both start out at St. Joseph High School in Westchester, Illinois where Isiah Thomas had attended. Throughout the entirety of the film, the parallel lives of William Gates and Arthur Agee would showcase the many ups and downs they would endure in their high school career with a lot of expectations laid upon them. While they both start out as freshman at the prestigious private school, only Gates would play in the varsity team, under the leadership of coach Gene Pingatore, where he would display a lot of promise into the first two years while getting financial aid and such to be at the school despite ninety-minute commute from Chicago to Westchester.

Agee would arrive at the school in a similar manner yet would only be at the school for nearly a year-and-a-half due to rising tuition as his family were unable to pay for his sophomore year as only he only played for the school in its freshman team. Despite meeting his idol in Isiah Thomas, the experience at St. Joseph was bitter forcing Agee to attend the more public Marshall High School in Chicago. The film does have this air of a rise-and-fall or fall-to-rise scenario as it relates to both Gates and Agee, respectively, in the way they would encounter their own environments and personal situations. The latter would endure his own family breaking up with his drug-addicted father struggling to be clean and would leave for a time before redeeming himself during Agee’s junior year and be there for him in his senior year.

Both Gates and Agee wouldn’t just struggle with academics but also the demands of living up to their potential as basketball players. Gates would be able to balance both as he was well-liked at St. Joseph but when he injured his right knee in his junior year. Things began to change as he struggled to get back in the game as he also had hard time living up to Pingatore’s demands. While Agee would go through a harder time academically where he would attend summer school during his junior and senior years. He would eventually succeed in basketball where he would take Marshall to the semi-finals of the state championship in his senior year where they finished third. Though Agee’s academics were good enough to get him to a junior college, it was Gates that would go to Marquette in Wisconsin yet he would question a lot of things in the course of the last two years of his high school tenure.

Steve James’ direction is very intimate in the way he capture the four years in the life of these two boys as it’s shot largely in hand-held cameras often inside cars or at the school with the aid of cinematographer Peter Gilbert and several camera operators in the course of the shooting. James, co-writer/co-producer Frederick Marx, and editor William Haugse would gather more than 250 hours of footage as the editing is a highlight of the film. Notably in the usage of slow-motion and other stylized cutting to help tell the story and move it back and forth in the different stories of Gates and Agee. James’ direction help add a lot to the story where it also showcases the dangers of the inner city as that dream of making it to the NBA is something that is a gateway out of the idea of possible death in the streets.

The sound work of Adam Singer and Tom Yore would help play into the world of the ghetto as well as the raucous atmosphere of the games including the state tournament games in Champaign, Illinois while Yore would create some score music with main music producer Ben Sidran as it‘s music soundtrack largely consists of hip-hop and jazz music. The music at times is somber as it relates to the struggle that these two boys endure but also have something that play into where they come from and the need to do something great.

Hoop Dreams is an outstanding film from Steve James. Not only is it a riveting sports documentary but it’s a whole lot more as it follow the lives of two boys trying to make it out of the inner city through their skills playing basketball. It’s a film that covers so much yet manages to do with such humanity as well as an understanding of where these boys come from and the struggle they have to endure to reach the impossible dream. In the end, Hoop Dreams is a magnificent film from Steve James.

Great review! This sounds so familiar but I can't recall if I've seen it or only read about it.

I love this one. Such an unassuming, moving film about good people. Just my kind of non-fiction. No fictional movie characters could generate such sympathy. Good review, man! Glad you dug it.

Great choice for blind spot! Among the best films ever made about sports, and unfairly snubbed of an oscar nomination for Best Documentary. Roger Ebert was right to champion the hell out of Hoop Dreams.

@Brittani-See it ! It is a documentary that everyone needs to see!!!

@Kevin-It's one of the reasons why it works. You have people who are flawed but you can relate to them and their struggles. It's a film that is really authentic.

@Chris-Ebert was so dead-on about that film. I heard how it got snubbed. The Academy voters only saw like 10-20 minutes of it and then were like... "next". What a bunch of assholes.

So glad you liked this one. It really is one of the great sports docs. But, as you said, so much more than that.