For the fourth and final week of February 2017 of the Thursday Movie Picks hosted by Wanderer of Wandering Through the Shelves. We once again go into the world of television as the focus is on superheroes and superpowers. An interesting choice despite the fact that I don’t watch a lot of TV shows but here are the choices that I pick:

OK, when it comes to Batman. There are only two men that have so far provided the definitive version of the Caped Crusader in Michael Keaton and Christian Bale in their respective film portrayals. Then there’s Adam West in the 1966 movie and the TV show during the 1960s. Yes, it’s quite campy and silly but it is actually a lot of fun to watch where it has superheroes in tights and fight off villains. Batman and Robin fighting the likes of the Joker, Penguin, the Riddler, and Catwoman (when it’s played either by Eartha Kitt or Julie Newmar) while riding the Batmobile. It’s a whole lot of fun and you get watch Batman… dance!!!!!

For anyone that was born in the late 70s and 1980s must’ve watched this show on Saturday mornings as it feature such great superheroes as Superman, Batman, Wonder Woman, Aquaman, the Flash, Green Lantern, Cyborg, and so many other DC comic heroes. Who wouldn’t enjoy a show with all of these heroes? Yet, it is flawed due in large part to the Wonder Twins who would have the lamest powers ever as they just sucked the fun leaving Batman and Superman having to save their no-talent asses.

3. Captain Planet and the Planeteers 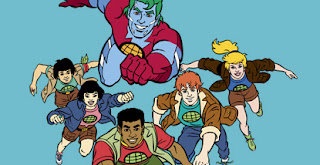 We go from the cool superheroes to the lame ones as this early 90s shit-fest came at a time when environmentalism was the thing. Yeah, we need to learn to take care of planet but not in this heavy-handed edutainment bullshit where you have five kids from different parts of the world wearing five rings as they would summon Captain Planet to help the world as it features a lame theme song which is a rip-off of New Kids on the Blocks’ Step by Step. It’s just lame as I often rooted for Captain Pollution. To think, people thought about making a film version of the show which won’t be as good as what Don Cheadle did with the character.

Of these three I've only watched Batman which is a cheesy hoot but some of the guest stars were sensational. I will eternally love Julie Newmar as Catwoman. The other two aren't really up my alley but memory weighs strongly on affection for a show.

I had more of a struggle this week than the last several but managed to think of three that I use to get a kick out of.

The Tick (1994-1996)-Ridiculously amusing animated series about a somewhat thick superhero clad in a bright blue costume along with his moth costume wearing sidekick Arthur, who has a wry, patient attitude with his often lunk-headed compatriot fights the bad guys in “The City”. They blunder about but still somehow manage to say the day. What else is there to say about a superhero whose call to arms is “SPOON!”

The Flash (1990-1991)-When Barry Allen (John Wesley Shipp), a forensic police scientist, suffers a freak accident being struck by lightning and covered in chemicals at the same time a chain reaction occurs giving him super human powers and the ability to move at the speed of sound. While learning how to control his new found powers a calamity occurs which sets him on the path to be the protector of the good people of Central City. Short-lived series had a nice sense of humor mixed in with its action sequences.

The Greatest American Hero (1981-1983)-After a chance encounter with aliens in the desert late at night where he is gifted with a magical red suit high school teacher Ralph Hinkley (William Katt) along with fellow witness FBI man Bill Maxwell (Robert Culp) attempt to fight crime using the suit’s powers. A couple of problems present themselves right away, Ralph and Bill are a silk and sandpaper match and even more troubling the pair have lost the instructions for the suit so they have to puzzle out how it works as they go along leading to trouble and a lot of bruises for Ralph. Engagingly played by Katt & Culp along with Connie Sellecca as Ralph’s girlfriend Pam.

OMG...you knownthe Batusi!! I mentioned that on my blog...hahahaha. When I watched I was embarrassed because he can't dance. I watched Super Friends all the time and I always liked Aquaman because he was short changed.....he can only do his best when in the water. This just made me think of The Man from Atlantis. I didn't watch the last one which is just as well but I laughed so hard with Don Cheadle making everyone a tree or a bush...tooo funny

Oh my god, Captain Planet!
I bow down to you, Sir.
The redhead on that show was my first sexual fantasy, oddly enough.

We match on two, Batman & Super Friends. Love those shows. Captain Planet, lol. Couldn't get into that one.

That gif is just brilliant, haha! I'm so tempted to hunt down that show :D

@pilch92 15andmeowing-Of course, how can you not choose Adam West?

@joel65913-I definitely remember The Tick though I have never seen it. The only thing about The Great American Hero I remember is that fucking theme song.

@Birgit-I don't know. I think Adam West can dance. He is Batman Classic.

@assholeswatchingmovies.com-OK then.... I never thought Captain Planet was attractive, unless he's played by Don Cheadle.

@Allie Adkins-I think you can find clips of it on YouTube. It's campy but man, it's fun.

@Wanderer-I heard they're still trying to get it off the ground. It's likely to be very lame unless they do what Don Cheadle has done with the character.