For the second week of February 2017 of the Thursday Movie Picks hosted by Wanderer of Wandering Through the Shelves. We venture into films about geniuses and prodigies. Individuals who are gifted as they have a unique way of seeing the world but also offer something that could help the world or destroy it.

Milos Forman’s award-winning film is one of the rare Best Picture winners that really deserves all of its accolades and more as it is about the genius and eccentricity of Wolfgang Amadeus Mozart. It’s a very unconventional bio-pic that tells the story of a man who likes to be a buffoon and the rival who hates but respect him as it is told from the latter’s perspective. With Tom Hulce in the role of Amadeus and F. Murray Abraham as Antonio Salieri, it is a film that has a lot to offer and more as it is just fun and enthralling in every way.

Martha Coolidge’s 80s sci-fi comedy definitely one of the finest films of the 1980s as it revolves around geniuses and how weird they are. While it revolves a group of college kids at a technical school trying to create a laser unaware of its professor’s intentions. It is a film that play into the life of these kids who are quite odd as it react to everything that is often stereotypical of nerds and geniuses with Val Kilmer, in his breakthrough performance, playing someone who wants to enjoy life as he guides a fifteen-year-old freshman to see there’s more to life than just being smart and do things.

3. Bobby Fischer Against the World 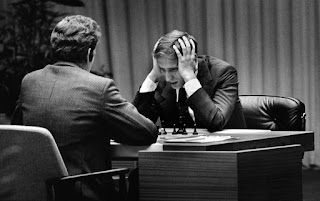 There’s prodigies and geniuses who are quite odd and weird but in a good way and then there’s Bobby Fischer. Liz Garbus’ documentary on the chess prodigy is a unique one as it play into individuals who were obsessed in playing the game and how they lose touch with reality as Fischer would be the most notorious. The film is a fascinating documentary on the man and those who knew him as they would be shocked by what had happened to him after his legendary 1972 game against Boris Spassky as he became insane, prejudiced, and all sorts of things that culminated with his death in 2008.

Real Genius!! It never occurred to me but such a solid choice. Haven't watched it in years but I remember it as kind of goofy but fun. Val Kilmer was so talented too bad he is such a jerk that he's basically squandered his potential through his antics and antagonisms.

Speaking of which Bobby Fischer is a poster child for that sort of thing. Such a gifted person and such a mess at the same time. So sad and the film was a sorrowful experience, very revealing but so melancholy.

We match!! Amadeus is just a great time at the movies, visually and emotionally.

This was a much easier week than last and I focused in on musical prodigies for my trio:

The Legend of 1900 (1998)-In the year 1900 Danny Boodmann, a stoker (Bill Nunn) on an American ship discovers an abandoned baby left on board. Taking him in to raise as his own he gives him a long unwieldy name eventually shortened to 1900 as the pair live their life at sea. As 1900 grows his musical genius becomes apparent and he becomes the ship’s mascot. After a tragedy befalls Danny 1900 remains on board growing to manhood (where he is played by Tim Roth) never touching dry land but continuing to hone his skill (including a fantastic sequence where he plays a waltz during a storm at sea). In time he befriends Max, a trumpeter in the ship orchestra (Taylor Pruitt Vince) and it is through his reverie we learn 1900’s story.

Poor Little Rich Girl (1936)-Starring Shirley Temple, one of Hollywood’s premier musical prodigies (in terms of dollars & cents THE musical prodigy) as the rich girl of the title. Barbara (that would be Shirl) on her way to boarding school is left to her own devices when her nanny is killed in an accident. Barbara unaware of this but not wanting to go to the school wanders the city until she becomes acquainted with and is taken in by a pair of down on their luck performers Jimmy & Jerry Dolan (Jack Oakie & Alice Faye). Thinking she’s an orphan and realizing that she’s a musical prodigy they put Barbara in their act as their daughter. Soon they hit the big time with their own radio show overseen by ad exec Margaret Allen (Gloria Stuart of Titanic fame) where they’re heard by Barbara’s widowed father who has been searching for her frantically. One of the better Temple vehicles with a first rate supporting cast, both Oakie and Alice Faye get several chances to strut their stuff, and no matter how you feel about her Shirley was a bundle of talent.

We match with Amadeus which is a grand film and I wish Tom Hulce won the Oscar( have to look up who did win). I don't know the other 2 but would love to see that documentary since Bobby did go off the deep end.

I only watched Amadeus and I loved it! The other two are intriguing, gonna watch it asap.

I only watched Amadeus and I loved it! I love how Mozart and Salieri's confrontation becomes the roots of the whole story! I haven't watched the other two but they're kinda intriguing for sure!

I've not seen any of these. How sad is that. I should've seen Real Genius, by now. That Bobby Fischer doc sounds really fascinating.

I've only seen Amadeus and I loved it. Real Genius sounds good.

I haven't seen any of these in full, but I want to say I've seen parts of Real Genius. I should watch Amadeus. It's popular today.

@joel65913-I have seen parts of The Legend of 1900 a long time ago. I'm not sure when it's going to come back on TV but I hope to see though I'm kind of familiar with its soundtrack that features a song by Roger Waters and Eddie Van Halen.

@Birgit-F. Murray Abraham won the Oscar for that same film. Bobby Fischer did go insane but so did other chess prodigies.

@Paskalis-It's been a long time since I've seen it but it such a great film. It's one of those rare Best Picture winners that is worth seeing in re-watches.

@Brittani-Amadeus is a classic whether in its theatrical cut or the extended director's cut as it's really one of those 80s classics.

We both picked "Amadeus". I'm not sure of its accuracy but Wolfgang was an amazing mewsical prodigy which ended so sadly. It seems most of this week's featured geniuses veered too far off course mentally or had some other issues to contend with making for a bittersweet story. "Real Genius" looks like a fun movie and I hope to watch that on YouTube. I'm undecided about the documentary. Thanks for sharing. Have a good weekend!

@Cathy Kennedy-You too. Amadeus definitely fit the bill with this category as it is true that all geniuses get a little crazy but that is what makes them so interesting.

Amadeus is such an excellent movie in nearly every aspect. Real Genius looks like my kind of movie.

Bobby Fischer Against the World doc looks interesting, I had been waiting to see it and had it on my list.

@vinnieh-Oh, Real Genius is a lot of fun as it's a quintessential 80s teen comedy.

@Katie Hogan-I think it's available on HBO on Demand as it's worth seeking out and why some geniuses go off the deep end.