For the first week of February 2017 of the Thursday Movie Picks hosted by Wanderer of Wandering Through the Shelves. We venture into films about artists in great painters. People who are known for their great art and painters as well as the paintings they have created.

Julian Schnabel’s bio-pic on Jean-Michel Basquiat is an unconventional film as it explores someone who known for his unique approach to street art that would become big in the New York art world. With Jeffrey Wright playing the titular role in a breakthrough performance, it’s a film that explores the fallacy of success as someone who struggles with wanting to be revered but also dealing with himself. It’s definitely one of the finest films about art and painters that features a great ensemble cast that includes Claire Forlani, Gary Oldman, Willem Dafoe, Christopher Walken, Parker Posey, Michael Wincott, Benicio del Toro, Dennis Hopper, and David Bowie as Andy Warhol in what many say is the most authentic version of Warhol on screen.

2. Girl with a Pearl Earring

In Peter Webber’s adaptation of Tracy Chevalier’s novel is definitely one of the most beautiful films of the 2000s though it’s more about the subject of the painting rather than its painter Johannes Vermeer. Still, it is a phenomenal film that explores the works of Vermeer from the perspective of a young maid who would become the subject of the titular painting. It showcases what an artist does as well as the maid who kind of understands what he wants in its painting as Colin Firth is incredible as Vermeer yet the film really belongs to Scarlett Johansson as the young maid Griet as it is one of her defining performances. 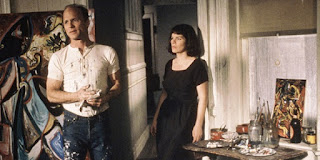 Ed Harris’ bio-pic on Jackson Pollock is probably one of the most intriguing portraits of one of the great American artists of the 20th Century. It’s an unconventional film with Harris playing Pollock as it showcases a man who strives to be great but is also quite tormented. With Marcia Gay Harden giving a phenomenal performance as his wife, the film showcases many things that made Pollock so beloved as an artist but also the man who is quite complicated and fucked-up that led to his death in 1956 at age 44. It’s a film that anyone who loves art must see.

Thank God for you! i was checking all those picks posts today and you are the first one to mention Pollock!

Good choices. I've seen all three, my favorite by far is Girl with the Pearl Earring the entire cast is so good, I particularly enjoyed Judy Parfitt as Firth's mother-in-law. It is a beautiful looking well realized picture.

It's been a long time for Basquiat and my memories of it are vague outside Bowie. I disliked, verging on hated, Pollock despite the good performances. The man was just such a distasteful jerk I had trouble caring.

I struggle a bit with this week thinking there weren't many about painters but apparently I'm wrong. One of my pics suffers from the Pollock problem but as I said I had some trouble coming up with choices.

The Naked Maja (1958)-Tale of the renowned painter Francisco Goya (Anthony Franciosa) and his passionate affair with the Duchess of Alba (Ava Gardner) , purportedly the model for the title painting. Set against Spain’s war with France and the Inquisition, though shot in Italy, the film is a visual treat with a good performance by Gardner but missing a certain spark, perhaps due to the fact that the stars detested each other behind the scenes.

Lust for Life (1956)-Biography of Vincent Van Gogh with an intense, driven performance by near lookalike Kirk Douglas as the tortured artist. Since he wasn’t acknowledged until after his death the film is a relentlessly grim look at the cost and weight of unrecognized genius. Overlong but loaded with works by the master.

The Moon and Sixpence (1942)-Inspired by the life of Paul Gauguin and based on the Somerset Maugham novel, the film tells the story of Charles Strickland (George Sanders) who throws his staid life as a married stockbroker away to run away to the South Seas to paint with nary a thought to the consequences. Well-acted with a superior cast but the lead character is an almost completely despicable person so it’s difficult to care too much for his story or fate.

We match with The Girl with the pearl earring. It is so well acted and one can see the life during that time. I love the whole set design and the lighting...beautiful. I haven't seen the other 2 films but they are on my list to see.

I can finally say I have watched your pick! Ed Harris' Pollock is a strong film in general, but I hardly enjoyed it. Possibly I need to revisit it someday.

I saw Girl with a Pearl Earring years ago and remember really thinking it was something special. Scarlett Johansson was excellently subtle and remarkable as the title character.

I should check out Basquiat for that cast alone. I've never seen Polluck either.

@Sati-You're welcome. I was going to go for something else but then that film popped into my head as I've realized I made the right choice.

@joel65913-Lust for Life is a film I do want to see as I'm interested in stories about Van Gogh as there's another film of Van Gogh that I want to see in Robert Altman's Vincent & Theo.

@Birgit-I read that cinematographer Eduardo Serra wanted to create something that was reminiscent of the painting Vermeer did in terms of its lighting which definitely helped as I saw the film on my 23rd birthday at an art museum where they did a special screening.

@Paskalis Damar-It's not an easy film to watch but still something every art fan should see.

@vinnieh-For me, that film made Scarlett my favorite actress ever at that time as I had become a hardcore fan of her after that and Lost in Translation as she is truly one of the best actresses working today.

@Brittani-Basquiat is a much looser film in terms of bio-pics but it also has this great look into the world of art. Pollock is more traditional in terms of its narrative but it is less accessible due to the fact that Jackson Pollock was a dick.

I love art so I should definitely check out Pollock.

@Sonia Cerca-I hope you see it as it is a really good film.

You've made me want to watch Girl with a Pearl Earring again now.

@vinnieh-Cool. You're welcome. It's one of the rare films I saw more than once in the theaters. God bless Scar-Jo 3:16!

I had a tshirt from H&M with Basquiat artwork on it and I looked into the artist as I knew nothing about him. Still yet to see the film, same with Pollock but I'm not keen on his art.