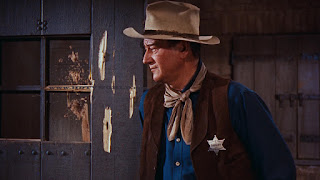 Based on the short story by B.H. McCampbell, Rio Bravo is the story of a town sheriff who finds himself facing off against a local rancher as he seeks the help of a cripple, a drunk, and a young gunfighter to deal with the rancher and his men. Directed by Howard Hawks and screenplay by Jules Furthman and Leigh Brackett, the film is about a sheriff protecting his town as he angers a local rancher for arresting the man’s brother. Starring John Wayne, Dean Martin, Ricky Nelson, Angie Dickinson, Walter Brennan, John Russell, and Ward Bond. Rio Bravo is a compelling yet enthralling film from Howard Hawks.

Set in a small town of Texas known as Rio Bravo, the film revolves a sheriff who has arrested the brother of a local rancher for murder as the brother wants him back leading to a battle of wits and wills between the sheriff and rancher. It’s a film that is about a man trying to uphold the law and do good for this little town as he has two deputies to help him despite the fact that they’re both flawed as one of them is a drunk struggling with being sober while the other is an old man with a bum leg. They’re later joined by a young gunfighter who observes from afar after his boss had been killed by one of the men working for the rancher as it’s revealed he’s paying men to do his dirty work. The film’s screenplay by Jules Furthman and Leigh Brackett doesn’t just explore the game of wits between this sheriff and rancher but also the life of a town that is just trying to live their lives in peace but the power of the rancher just causes problems after a man is killed at a bar by the rancher’s brother who had already killed numerous people in the past.

The town sheriff John T. Chance (John Wayne) is a no-nonsense man that is willing to listen but he has his job to do as he wants no one causing trouble. Yet, Joe Burdette (Claude Akins) would be the one to cause trouble and humiliate Chance’s deputy Dude (Dean Martin) who hasn’t had a drink of liquor in two years as he’s struggling to maintain his sobriety as he accidentally knocks out Chance. After Joe is arrested for killing a man at the saloon and be arrested at the saloon where Burdette’s men are, the trouble begins where Chance tries to smooth things down and not cause trouble despite the target on his head from the men who work for Nathan Burdette (John Russell). Chance, with Dude and the old man with a bum leg in Stumpy (Walter Brennan) who watches over the jailed Joe, as they all figure out what to do. Adding to the complication that Chance is dealing with is the arrival of a mysterious woman in Feathers (Angie Dickinson) who is suspected of being a cheating gambler while a young gunslinger named Colorado (Ricky Nelson) arrives wanting to help after a friend of Chance in Pat Wheeler (Ward Bond) is shot by one of Burdette’s hired guns.

The script also showcase Dude’s struggles as he was once a skilled gunslinger but years of alcoholism has made him feel diminished yet Chance keeps him on knowing he still has something left when he’s motivated. The script also play into Chance’s relationship with Feathers who is quite like him in the fact that she doesn’t take shit from him or anyone as she is asked to leave but she prefers to stay as it causes this unlikely attraction between the two. When Colorado joins Chance in stopping Burdette’s men, he is someone that is quite smart for someone that is young as well as very skilled as he’s also know where his place is as he immediately gains Chance’s respect. Especially in the film’s climatic showdown that involves a game of chance and wit with guns and dynamite.

Howard Hawks’ direction is definitely entrancing due to the visuals he creates while also emphasizing in simple compositions and moments to create a mood for the film. Notably the opening sequence as it doesn’t feature any dialogue for nearly several minutes as it involves Joe Burdette humiliating Dude and creating trouble where he is captured by Chance. Shot on location near Tucson, Arizona, the film does play into a time in the West where it was starting to get less rowdy and more civilized but there’s still some trouble as it involves Burdette who is still trying to rule the town as he owns the local ranch and a saloon where his men are free to do with whatever they want. While Hawks would use some wide shots to capture the locations as well as viewpoints of the men looking at Burdette’s saloon from the jailhouse. Much of Hawks’ direction would emphasize more on a sense of intimacy in the usage of close-ups and medium shots.

The direction would have moments that are intense but also very restrained as Hawks is more interesting in building up the suspense such as a scene where Chance and Dude try to find Ward’s assassin as it’s all about the little details. There are also these moments such as a confrontation between Chance and some of Burdette’s men who try to stop Chance as they’re forced to deal with Colorado who would find a way to outwit Burdette’s men with Feathers’ help. While Hawks would take a simple approach to the drama and suspense, he would also infuse bits of humor in the film courtesy of Stumpy as well as a moment for a sing-a-long involving Dude, Colorado, and Stumpy as it help defuse some of the tension and suspense as it show these three men as just human beings trying to have some fun and show what the world could be away from the greed and violence. Even if it means having to do something drastic to stop Burdette from ruining all of that all because he wants to free his brother who is likely to kill again without remorse. Overall, Hawks creates a thrilling and gripping film about a sheriff and his deputies going up against a greedy yet intelligent cattle rancher.

Cinematographer Russell Harlan does brilliant work with the film’s gorgeous Technicolor film stock to showcase some of the beauty of the clothes and locations as well as for the scenes set at night. Editor Folmar Blangsted does excellent work with the editing as it is very straightforward as well as using some methodical cutting to play into the suspense. Art director Leo K. Kuter and set decorator Ralph S. Hurst do amazing work with the look of the saloons, jailhouse, and the local hotel that Chance stays frequently as well as the exterior of Burdette’s ranch.

Costume designer Marjorie Best does fantastic work with the look of the clothes from the chaps, hats, and shirts to play into the personality of the characters as well as the stylish clothes of Feathers. The sound work of Robert B. Lee is terrific for capturing some of the natural elements as well as creating heightened sound effects for some of the gunfire. The film’s music by Dimitri Tiomkin is superb with its usage of lush orchestral flourishes and bombast as well as creating a few songs with lyricist Paul Francis Webster plus a traditional Mexican instrumental and a song by Ricky Nelson.

The film’s marvelous cast include some notable small roles from Joseph Shimada as the local undertaker Burt, Pedro Gonzalez-Gonzalez as the hotel manager Carlos, Estelita Rodriguez as Carlos’ wife Consuelo, Claude Akins as Nathan’s murderous brother Joe, and Ward Bond in a terrific small role as Chance’s old friend Pat Wheeler who arrives in town for business only to get himself into trouble with Burdette’s gang. John Russell is superb as Nathan Burdette as rancher who wants his brother free no matter what as he’s willing to do whatever it takes as well as hire killers and maintain his own sense of riches and sense of power. Angie Dickinson is amazing as Feathers as a woman who has been accused of being a cheat in gambling as she just stopped in the town for a few days only to stay as she becomes intrigued by Chance as it’s just a lively performance from Dickinson.

Walter Brennan is excellent as Stumpy as an old man with a bum-leg who is the film’s comic relief as he feels underappreciated while doing much of the work in watching Joe Burdette as he’s just an absolute joy to watch. Ricky Nelson is brilliant as Colorado as a young gunslinger who was working for Wheeler as he would later help Chance in dealing with Burdette and his gang as he is quite restrained but also very mature for his age as it's one of Nelson’s finest performances. Dean Martin is remarkable as Dude as a skilled gunslinger struggling to maintain his sobriety as well as the effects of alcohol as a man who feels like his time his done while trying to restore whatever dignity he has left. Finally, there’s John Wayne in a phenomenal performance as John T. Chance as the local sheriff who is trying to maintain law and order in this small town as he’s a man that just wants to do his job but also knows he has to be smarter than most men as there’s a gravitas to Wayne’s performance as well as someone that can take a few hits and still get back up as it is one of Wayne’s finest performances in his illustrious career.

Rio Bravo is an outstanding film from Howard Hawks featuring a tremendous performance from John Wayne. Along with its great ensemble cast, gorgeous visuals, gripping story, and a fantastic music soundtrack. The film isn’t just one of the finest films of the western genre but it’s also a film that is very witty but also engrossing for the way it explores a man trying to do what is right and needing to be smarter than those around him. In the end, Rio Bravo is a magnificent film from Howard Hawks.

I've never seen this one, though I am somewhat familiar with it. I'm glad you liked it!

This was one of my late grandfather's favourite movies.

@Brittani-It is pretty much one of the quintessential westerns in cinema and it's a must-see in my opinion as someone who loves westerns.

@vinnieh-Awesome. This is definitely a favorite for anyone who loves westerns. My dad loves this film.

Agree Walter Brennan is fun, if you like him as comic relief you should check out the western Red River (1948) where he plays a similar role. Brennan is also in To Have and Have Not (1944). Howard Hawks likes to use him.

@Chris-I've seen Red River last year. I do like Walter Brennan a lot and I hope to see more of him and more films of Howard Hawks in the future.