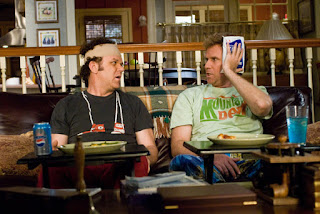 Directed by Adam McKay and screenplay by McKay and Will Ferrell from a story McKay, Ferrell, and John C. Reilly, Step Brothers is the story of two forty-year old men who reluctantly become step brothers after their parents marry as they start off as enemies only to become friends in their love of chaos and leading a slacker lifestyle. The film is an off-the-wall comedy with elements of anarchy in which two men refuse to grow up as they try to do their own thing while endure some strange situations. Starring Will Ferrell, John C. Reilly, Richard Jenkins, Mary Steenburgen, Adam Scott, Kathryn Hahn, Andrea Savage, and Rob Riggle. Step Brothers is a hilarious and confrontational film from Adam McKay.

A man and woman meet and fall in love at a convention where they both get married much to the dismay of their sons who are in their 40s as they’re forced to share a room together as they dislike each other believing they’re a detriment to their slacker lifestyle. That is pretty much the film in a nutshell as it revolve two guys who don’t want to grow up and refuse to get jobs as they start off as enemies only to realize how much they have in common as they create a lot of chaos much to the dismay of their parents. The film’s screenplay does follow a simple formula of these two men hating and then embracing each other while plotting to create their own business in order to get their parents off their back.

Yet, Brennan Huff (Will Ferrell) and Dale Doback (John C. Reilly) both share an equal sense of disdain towards Brennan’s younger brother Derek (Adam Scott) who often gloats his success as a helicopter licensing agent as well as do whatever it takes to humiliate Brennan. Though the script does follow a simple plot formula, there is a looseness to it in terms of its approach to dialogue and improvisation as well as the fact that it’s a story that doesn’t need a lot of plot schematics. It’s all about the idea of absolute and total chaos which does give the story something that can be described as an anarchist film of sorts.

Adam McKay’s direction may have simple ideas to compositions and creating moments that are light-hearted and funny yet it’s his approach to improvisation and total mayhem is what is key to the film. There is something confrontational about everything that is going on though it doesn’t start out like that first when Brennan’s mother Nancy (Mary Steenburgen) is at a convention watching Dale’s dad Robert (Richard Jenkins) give a speech as he look at her and all of a sudden the two fall in love and have sex though nothing gratuitous is shown. It’s when Brennan and Dale finally meet face-to-face is where the film starts to take shape immediately and building up slowly for this sense of unexpected and total sense of anarchy. Even as McKay knows where to shoot a scene to play into these moments of chaos such as Brennan and Dale’s first fight over the fact that Brennan touched Dale’s drum set and rubbed his testicles on them or the moment the two are sleepwalking and causing trouble. Then there’s these moments that push the envelope of good and bad taste such as a scene of Brennan and Dale being assaulted by middle school kids in which the former is forced to do something extremely awful.

The direction also showcase moments that are quite crazy which relate to a subplot in which Dale is having a reluctant affair with Derek’s wife Alice (Kathryn Hahn) who hates being married to Derek. There are also these moments that aren’t afraid to offend as it relate to Brennan and Dale trying to ruin Derek’s sale as McKay’s direction is very offbeat in those moments. The film’s climax at this event known as the Catalina Wine Mixer is definitely a culmination of everything Brennan and Dale have endured in their attempt to be free but also deal with expectations of conformity. What happens is this strange mixture of anarchy and beauty which is kind of indescribable but an absolute joy to watch and what better place to do than at the fucking Catalina Wine Mixer. Overall, McKay creates an outrageous and off-the-wall film about two immature men who become stepbrothers.

Cinematographer Oliver Wood does excellent work with the film’s cinematography from the colorful and sunny look of the locations in the day to the usage of lights for some of the interiors set at night. Editor Brent White does nice work with the editing as it has elements of style in the slow-motion cuts as well as some of the montages and other moments to play into the humor. Production designer Clayton Hartley, with set decorator Casey Hallenbeck and art director Virginia L. Randolph, does fantastic work with the look of the house the brothers live in as well as their bedroom and the look of the Cataline Wine Mixer. Costume designer Susan Matheson does terrific work with the costumes as much of its casual including the tuxedos the stepbrothers wear for their job interviews.

Visual effects supervisor Rocco Passionino does some good work with some of the minimal visual effects as it is mostly set-dressing including some funny scenes involving the stepbrothers dealing with some awful kids. Sound editor George H. Anderson does superb work with the sound in the way some of the chaotic moments in the film are presented via sound as well as some of the moments during the Catalina Wine Mixer. The film’s music by Jon Brion is brilliant for its mixture of jazz and kitsch to play into the funny moments of the film while music supervisor Hal Willner creates a fun soundtrack that feature music from Hall & Oates, LCD Soundsystem, Vampire Weekend, Vanilla Ice, Q-Tip, Dizzee Rascal, Dilated Peoples, KO & the Knockouts, Brenda Lee, the Mighty Bosstones, and the Kinks.

The casting by Allison Jones is great as it feature some small roles and appearances from Seth Rogen as a sporting goods manager, Matt Walsh as a heckler at the Catalina Wine Mixer, Horatio Sanz as a Billy Joel tribute band singer at the Catalina Wine Mixer, Gillian Vigman as a woman interviewing the stepbrothers for a job, Phil LaMarr as a man trying to buy the family home, Lurie Poston and Elizabeth Yozamp as Derek and Alice’s smug and spoiled asshole kids, Logan Manus as a co-worker of Derek, and Rob Riggle as another co-worker of Derek in Randy who wants to punch Brennan because of his ugly face. Andrea Savage is wonderful as Brennan’s therapist Denise who tries to help him only to deal with the fact that Brennan is in love with her. Kathryn Hahn is fantastic as Derek’s wife Alice who falls for Dale as she provides some of the funniest moments in the film about wanting to fuck Dale so hard in her hatred of Derek.

Adam Scott is excellent as Derek Huff as Brennan’s younger brother who is a total fucking asshole that thinks he’s better than everyone while rubbing his own success and ambitions on his brother as well as trying to make Dale’s father Robert as his best friend. Mary Steenburgen and Richard Jenkins are amazing in their respective roles as Nancy Doback and Robert Huff with Steenburgen as the more sensible of the two parents trying to understand them but also put her foot down with Jenkins as the more strict of the two as he tries to get them to conform but also reveal his own faults on the idea of growing up. Finally, there’s the duo of Will Ferrell and John C. Reilly in phenomenal performances in their respective roles as Brennan Doback and Dale Huff as the two just go all-out in terms of being outrageous and off-the-wall with Ferrell as the more childish of the two due to his trauma and Reilly as being more of the funny guy as they’re just a joy to watch.

Step Brothers is a fucking wild and tremendous film from Adam McKay that features hilarious performances from Will Ferrell and John C. Reilly. Along with a great supporting cast, a premise that goes way beyond its simple idea, and scenes that play from the profound to the absolute profane. It’s a film that doesn’t try to do anything to go for laughs but rather be insane and confrontational enough to see some of the humor of it in the most inventive way. In the end, Step Brothers is a magnificent film from Adam McKay.

Been a while since I've watched thisbone, but I had a blast watching it. Might be time for a revisit.

I love this movie so much.

@Wendell-It's always worth a revisit as I think it's one of these comedies that is quite ahead of its time in terms of its lewd and confrontational content. I wasn't enamored with it at first but repeated viewings made me realize how great it is as I just fucking love it to death.

@Brittani-Same here. It's so fucking off-the-wall and not afraid to offend. That's why it's such a masterpiece in the art of comedy.

You know, I actually saw this movie for the first time just last week. So cool that your just posted a review about it. I thought it was absolutely hilarious. Fucking wild indeed.

@Alex Withrow-It's a film that I think gets better with repeated viewings as it is just fucking nuts. I can understand why some of the critics weren't enamored with it but it's now become this cult classic that really defies all of the things we're so used to in this very PC-culture.