Thursday Movie Picks: The Chosen One

For the third week of July 2017 as part of the Thursday Movie Picks series hosted by Wanderer of Wandering Through the Shelves. We focus on the concept of the chosen ones. The ones who are destined to either save the world or be the one to help us all. Here are my three picks:

One of the quintessential 80s comedies to star Eddie Murphy during his golden period, this film directed by Michael Ritchie is probably his most underrated which has Murphy as a social worker that just wants to find people who are missing. It’s a very funny film that includes that hilarious line “I want the knife” but it’s a film that has heart as well as a touching story of a man just trying to find a Tibetan child with special powers. Even as it mixes martial arts with some action/adventure, fantasy, and lots of humor all courtesy to Eddie Murphy when he was the funniest man in the world. 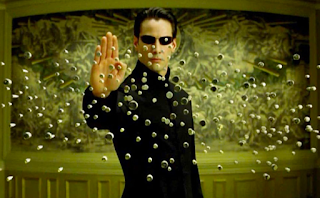 From the Wachowskis comes the film that was a total game-changer as it revolves around a computer programmer who learns that he’s part of a reality that isn’t real only to become the one person who could stop it all. It is truly one of the finest films that features an iconic performance from Keanu Reeves as this man known as Neo who would defy the bad guys and save humanity from this reality that is proven to be totally false.

The sixth film of the Harry Potter series definitely takes a bit of time for Harry Potter to deal with the revelation that he’s the chosen one to stop Voldemort while learning more about Voldemort’s past. The Half-Blood Prince refers to a book Potter gets which doesn’t teach him some unique potion methods but also new spells as it is a fine take on the book which only sets up the journey Potter would go into in order to defeat Lord Voldemort for good.

And now… here is someone who claims to be the Chosen One but…. Never drew a dime…

Love the choice of The Golden Child. Murphy was red hot then too bad about the years following. Sorry but I hated The Matrix very, very much. I expected to see Harry Potter all over the place today but this is the first time I've seen this film pop up today. It's a good one, excepting the first which was awful all of them have something of value but they definitely improved as they went along.

I stayed away from franchises because I expected that many choices would come from them and went with three films on the theme that are one and dones.

Excalibur (1981) - Director John Boorman’s amazingly evocative version of Le Morte d’Arthur where all the elements-casting, cinematography, acting, music, visual style and direction blend seamlessly. Following a prologue explaining how Excalibur came to be in the stone we meet the young squire Arthur (Nigel Terry) who is guided by Merlin (a brilliant Nicol Williamson) to the realization that he is The Chosen One by removing the Sword in the Stone. Initially as King Arthur he unites England, befriends Lancelot, takes Guenevere as his Queen and formulates the Knights of the Round Table but then his malicious half-sister Morgana (Helen Mirren) begins to take her revenge for the grudge she’s long held against both Arthur’s father and Merlin and a darkness descends on the land. Loaded with performers who went on to greater fame-Gabriel Bryne, Liam Neeson, Patrick Stewart and Mirren among them.

The Ten Commandments (1956)-C.B. DeMille’s final film is a huge pageant telling the story of how Moses came to realize he is The Chosen One to lead the Exodus to Mount Sinai and receive the Ten Commandments. Florid and often arch but loaded with great set design and effects that are still impressive 60 years later. Charlton Heston’s granite stiffness is actually a perfect fit for Moses, MISS Anne Baxter could not be more dramatically entertaining as Nefretiri torn between two men and emoting for all she’s worth over it and they are not alone, everybody more or less projects to the back row. Both Yul Brynner and Yvonne de Carlo are more naturalistic but they’re exceptions. If you enjoy BIG pictures making BIG statements this is one of the best.

The Last Starfighter (1984)-Teenager Alex Rogan (Lance Guest) spends all his free time playing the video game Starfighter at which he’s expert. He doesn’t think much of it when the new guy in his trailer court (Robert Preston) notices how good he is but the next thing he knows Preston has spirited him away to the edge of the galaxy and told him that he is The Chosen One who can save the universe! Turns out the video game was a test and Alex and his compatriot lizard/man Grig (Dan O'Herlihy) are leading the Star League in fighting the evil Kodan forces.

I almost picked The Golden Child, myself. Not one of my favorite Murphy flicks, but I do enjoy it. I love everything about The Matrix, but I knew it would be very popular today so I didn't pick it.

I loved The Matrix. The Half-Blood Prince isn't my favourite of the series but it's good.

I love Harry Potter, I didn't choose that film but DH2. I really loved Half Blood Prince the book, I wish they would've explained that concept better in the movie, but it's so solid.

So you know so many people hate The Golden Child and it is ranked as one of the worst films?? I liked it when I saw it and found funny as hell. Great choice! The Matrix is the popular one this week and one I don't mind although,by far, not my favourite. I hated the sequels and they should have just Le it alone. I love the Harry Potter series and one could have chosen any film since his scar alone makes him the chosen one

The Golden Child never fails to make me laugh.

Harry is popular! But I like how everyone has chosen a different film from the series.

I was just reading about Eddie murphy, Golden CHild included, but I wasn't too eager to see this.

Ah yes The Matrix, the most 'Chosen One' story of them all. I love this film, its is just amazing. And it still stands on its own if you wish to forget the terrible sequels.

@joel65913-Ah, The Last Starfighter, I haven't seen that film in years. I loved that one.

@Wendell-I wanted to avoid the usual tropes and put in something fun.

@Brittani-I agree that the books are better as I do feel that HP fans robbed themselves of something bigger with having the last book be one entire film.

@Birgit-Anyone who thinks The Golden Child is one of the worst films ever definitely haven't seen The Adventures of Pluto Nash.

@vinnieh-Eddie Murphy in the 80s can rarely do wrong.

@Katie Hogan-The Golden Child maybe a bit of a substandard film from Eddie but it's still extremely hilarious. Always stick with the original Matrix.