For the second week of July 2017 as part of the Thursday Movie Picks series hosted by Wanderer of Wandering Through the Shelves. We venture into films that are either set in amusement parks or feature amusement parks. Instead of going for the obvious, here are my three picks: 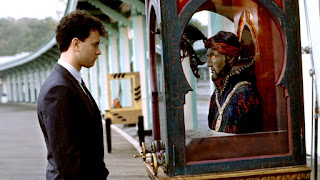 The film does feature a few sequences at a theme park though the premise is about a boy wants to become big so he can ride this rollercoaster. Instead, he ends up being grown into a man in his mid-30s as he’s still a kid though he does eventually get to ride a roller coaster but it’s really more about this magic fortune teller he finds who would grant him his wish. 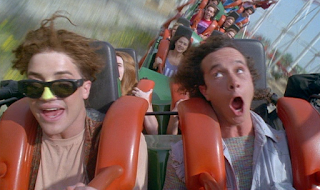 Though it’s more of a film about a caveman who wakes up in the 20th Century and be introduced to the eccentricities of the modern world. There is a great scene in which Brendan Fraser’s caveman character Link and Pauly Shore both to an amusement park and go nuts as they ride rollercoasters and beat up a guy in a costume. All in good fun. 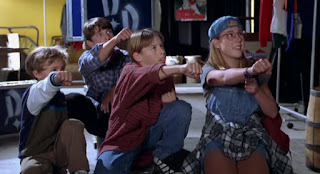 We go from a classic and a cult film to one of the worst films ever made. The 3 Ninjas franchise had a good first film but its two follow-ups were pretty bad as it catered to the lowest common denominator when it comes to family films. Then there’s this one starring Hulk Hogan, Loni Anderson, and Jim Varney as it feature none of the original actors with the exception of Victor Wong (in his final performance) as their grandfather as it’s just an awful film where it has some horrific violence too silly for kids and parents and a lot of karate calls that is just fucking annoying. Plus, we have Hogan as some washed-up TV star who tries to spout positive bullshit that he never stood for like the real Hogan was in his time.

I feel like a bad blogger for saying this, but I've never seen Big. And I'm a Tom Hanks fan, so I'm not sure how I let that one get by me all these years. I just flat out avoided all the 3 Ninjas movies. Sadly, I have seen Encino Man. I thought that was terrible.

I love Big and am glad to see it make an appearance on a couple of lists. Such a sweet natured film with a great performance by Tom Hanks in the lead. He judges just how childlike to make the adult Josh plus the casting of David Moscow is so spot on, he really seems like he would grow up to look just like Hanks at that time. Terrific supporting cast and direction by Penny Marshall.

Love the off-centeredness of your second two choices though I've only seen one of them. Encino Man was rather foolish but dumb fun. The other sounds completely missable.

Funny that your first two pictures feature roller coasters and that's the subject of my first pick, though I hate them. I'm a big one on rides that spin but hurtling towards the earth in a tin box is not my idea of fun. My last takes a trip to Disney and my second takes a trip to the ridiculous side!

Rollercoaster (1977)-After a rollercoaster derails due to a device placed on the track the major amusement park owners receive a taped message from the mad bomber (Timothy Bottoms) that unless they pay him a million dollars the carnage will continue. Safety inspector Harry Calder (George Segal) who had cleared the first coaster and was investigating the crash is pulled in by FBI agent Hoyt (Richard Widmark) when the nameless young man demands Harry deliver the extortion money to his next target or he’ll detonate another bomb. Suspenseful but not quite the experience it was in theatres where it was presented in Sensurround.

The Incredibly Strange Creatures Who Stopped Living and Became Mixed-Up Zombies!!? (1964)-I really can’t better this IMDB description: "Jerry falls in love with a stripper he meets at a carnival. Little does he know that she is the sister of a gypsy fortune teller whose predictions he had scoffed at earlier. The gypsy turns him into a zombie and he goes on a killing spree."

40 Pounds of Trouble (1962)-Sixties version of the Damon Runyon story Little Miss Marker about a little girl left in Lake Tahoe casino manager’s Steve McCluskey (Tony Curtis) care as a hold against the debt owed by her father. When the father is rubbed out Steve with the help of the casino’s singer Chris Lockwood (Suzanne Pleshette) has to look after the tyke and dodge various people after him for different reasons. They decide to take the little one to Disneyland (at this point open less than 10 years) and between rides are chased through the park offering a pretty complete picture of what the place looked like in the 60’s. Cute comedy where unsurprisingly being mostly a Disney movie all ends happily.

Big is a cute movie and the character must have been one happy camper for having sex with a much older lady:) I have never seen Encino man and have no desire to see the last one

Woop, Big, like you said, we share it.. which is surprising because it's such an unique pick!

Great call on Big, I love that movie.

I've seen all of these, just not in years. I used to love the 3 Ninjas movies when I was a kid. They probably wouldn't hold up at all if I watched them now.