For the third week of August 2017 as part of the Thursday Movie Picks series hosted by Wanderer of Wandering Through the Shelves. We go into the theme of rescue as they’re often the kind of films that are always fun to watch as it follow a simple formula that involves the protagonist trying to save someone and do whatever he/she can to kill the fucking bad guys. Here are my picks:

It is one thing to kidnap a young girl from her commando father and force him to kill someone or else the young girl gets killed. Yet, if that commando is played by Arnold Schwarzenegger and his daughter is Alyssa Milano. Jabroni, you’re going to need a shitload of body bags. This is an absolutely no-holds-barred, in-your-face action film that isn’t afraid to be cheesy nor provide anything other than just explosive action and some great one-liners that any immigrant coming to America can say and learn. After all, who better to show them the way to the American Dream than a man from Austria who says, “I eat Green Berets for breakfast and right now, I’m very hungry”. 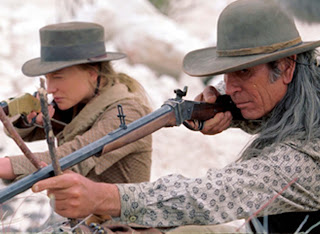 From Ron Howard is an underrated western in which Cate Blanchett teams up with her estranged father, played by Tommy Lee Jones, to retrieve her daughter who had been kidnapped by some evil Apache warriors. It has Blanchett and Jones along with Jenna Boyd travel on horseback to the Mexican border as it’s an adventurous film that features Evan Rachel Wood as Blanchett’s eldest daughter who is kidnapped along with Elisabeth Moss. Ron Howard is often known for making middling, middle-of-the-road Hollywood films but this is one of his better films. 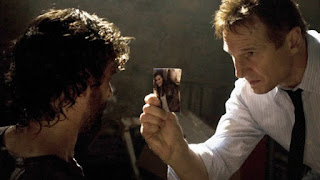 The film that made Liam Neeson an unlikely action star in which he plays a former CIA operative whose daughter had been abducted by some human traffickers who would sell her to sex slavery. It’s a film that has Neeson telling his daughter’s kidnappers in a very quiet voice that he will hunt them down and kill them. The people who kidnap Neeson’s daughter don’t take his threat very seriously and what happens is that they really fucked up. After all, he’s got some very special skills and will use them.

It's amazing that we can still have so much goodwill for TAken.

Commando is not bad even with Arnie although I can't help but think "going commando". I know my mind went to the gutter. I have seen The Missing...forgot I did actually but it's quite good although not a favourite of mine. I love Taken and think it is a great movie and made Liam an action star. I do think they should have stopped and not made any sequels though.

Love that you picked Commando from Arnie's most fruitful period. It's dumb as a box of hair but mindless fun.

I wasn't crazy about Taken despite liking what Neesom did in it. It was just a trifle too unbelievable. I know movies ask you to suspend that belief but sometimes the film just asks too much.

I liked but didn't love The Missing though Blanchett and TLJ paired well in it.

I went with one of Ron Howard's better films as well and one that gets the details right and keeps the audience involved despite the outcome being a known. My other two look at the theme from VERY different perspectives.

Apollo 13 (1995)-Astronaut Jim Lovell (Tom Hanks) has been bumped up to command the Apollo 13 mission to the moon along with Fred Haise (Bill Paxton) and Ken Mattingly (Gary Sinise). Days away from launch Mattingly is pulled due to the risk of an infection and Jack Swigert (Kevin Bacon) takes his place and the launch proceeds. Everything seems to be going according to schedule until there is a sudden explosion and the three astronauts are suddenly facing a life and death situation in deep space with the only hope of rescue Mission Control back at NASA. The bulk of the film is taken up with those efforts lead by Gene Kranz (Ed Harris) while Lovell’s wife (Kathleen Quinlan), the other’s family members and the world watch anxiously. Despite the known outcome incredibly gripping film was justly nominated for a slew of Oscars.

Outrageous Fortune (1987)-Two struggling actresses-the hoity toity Lauren (Shelley Long) and brassy Sandy (Bette Midler) receive scholarships to a prestigious acting class conducted by a legendary Russian teacher Stanislav Korzenowski (Robert Prosky) and despise each other on sight. At the same time they both become involved with a handsome laconic teacher Michael Santers (Peter Coyote) unbeknownst to each other. When it appears that Michael has been killed the pair realize that’s not so and surmise he’s in trouble and needs rescuing. They reluctantly team up to save him, sniping at each other all the way. It does NOT go as expected but they are off on a merry chase across the country aided at times by the stoned out Frank (a hilarious George Carlin). Boisterous comedy with sensational silk and sandpaper chemistry between odd couple Long and Midler.

Ace in the Hole (1951)-Once successful reporter Chuck Tatum (Kirk Douglas) has landed at a small Albuquerque newspaper due both to his drinking and bad abrasive attitude. Sent on a nothing assignment he stumbles across what he senses is a headline story that could return him to the big leagues, a man has become trapped in a cave-in. Opportunistically manipulating the situation, with the collusion of the sheriff and the man’s greedy wife Lorraine (Jan Sterling) for their advantage more than the safety of the trapped man they find ways to delay the rescue without appearing to do just that. As the news spreads the quiet remote area begins to resemble a carnival atmosphere (the reissue title of the film was The Big Carnival) and the delaying tactics start to endanger the trapped man’s life. Awesome performances but this terribly cynical film is a disturbingly prescient example of the news reporting ethos “If it bleeds, it leads” culture. May be Wilder’s darkest film, that’s saying something for someone who directed Double Indemnity and Sunset Blvd.

Taken is such a good pick. Yes, it's a trashy movie but it's so much fun and Neeson is really cool in all those films and makes them entertaining

Nice list! The Missing is pretty underrated. I thought Evan was so good in it, and I felt so bad for her character. The girl playing her younger sister was good too.

I still have a soft spot for the first Taken. That was a good time, I don't let the sequels ruin it.

Commando is the gold standard of dumb fun. Great pick!

I'm happy to see someone else give The Missing credit, it's so underrated.

@Birgit-Taken 2 was alright but the third, not so much. Commando is a film where if you don't take it seriously. You just enjoy for what it is.

@joel65913-I don't consider Ace in the Hole a rescue film but rather a film about journalism and the sensationalism of it. Outrageous Fortune is a film I haven't seen in a very long time but I do remember how fun it was due to Bette Midler.

@Sati-It is entertaining and that is what a good rescue film should be.

@Wendell-Of course it is. It's the best film to fit into this subject.

@vinnieh-Damn straight. Any film that has Cate Blanchett and Tommy Lee Jones kicking ass together is a win for me.