2018 Blind Spot Series: Swept Away... by an Unusual Destiny in the Blue Sea of August 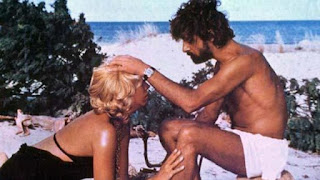 Written and directed by Lina Wertmuller, Travolti da un destino nell’azzurro mare d’agosto (Swept Away… by an Unusual Destiny in the Blue Sea of August) is the story of a wealthy woman who vacations on a yacht with friends where she finds herself stranded on an island with one of the boat’s crew members as they deal with each other and their own social classes. The film is a study of two people from different ideas and environment who are stranded on a deserted island where they both are forced to deal with each other. Starring Mariangela Melato, Giancarlo Giannini, Riccardo Salvino, Isa Danieli, and Aldo Puglisi. Travolti da un destino nell’azzurro mare d’agosto is a ravishing yet provocative film from Lina Wertmuller.

The film follows two different people from two different social and political backgrounds who meet on a yacht as they’re later stranded on a deserted island where they switch ideals in some ways as it leads to tension and later romance. While it’s a film with a simple premise, it is filled with a lot of complexities in its relation to gender and social politics where a man and a woman are the center of this battle of sorts as writer/director Lina Wertmuller explores two people in a situation with a lot of uncertainty and how they would react to their situation. The film’s first act is set partially on this yacht where the wealthy capitalist Raffaella Pavone Lanzetti (Mariangela Melato) is arguing with her husband Signor (Riccardo Salvino) about the virtues of their class with the yacht crew member Gennarino Carunchio (Giancarlo Giannini) listening as he is a communist that despises the rich and is only working because he needs the money. Yet, he has to cope with Raffaella who wants to go to an island despite Gennarino’s warning about the weather where they’re stranded on a lifeboat with a motor that isn’t working.

The second act is set on this deserted island where Gennarino has all of the power as he can get fish, make a fire, and do all sorts of things while Raffaella struggles to deal with the new environment she’s in. She has a hard time getting food and such where the tables are turned with Gennarino living comfortably where he has Raffaella doing things just to teach her a lesson about the way she treats him back at the yacht. Eventually, Raffaella starts to act out leading to all of this tension where they fight but also deal with the idea that they’re attracted to each other. This attraction is unique where it play into these desires that had been holding them back but there is also this possibility that they could be rescued and returned to their life before.

Wertmuller’s direction is definitely intoxicating for its setting as it is shot largely in the Mediterranean Sea near Italy with the deserted island shot near the town of Tortoli in the Sardinia section of the country. While Wertmuller would use a lot of wide shots to capture the scope of the locations as well as the sea, she would also use it to play into the distance of ideologies between Gennarino and Raffaella. Even in shots where Raffaella would look at Gennarino at the island getting food and such while she looks on with despair and desperation. It adds to Wertmuller’s approach in her humorous take where she would favor Gennarino for much of the film’s first half but it would then shift in favor of Raffaella who laments over the drawbacks of her own lifestyle as she and Gennarino would argue over their ideals. Wertmuller would use medium shots and close-ups to capture the conversations as well as the intimacy for the scenes on the yacht including its interiors to play into Raffaella’s dominance in the conversations as well as finding ways to complain about the cooking or how warm the wine is. Wertmuller would use those same ideas of compositions for the scenes in the island but with more camera movements.

The film would also have some questionable moments as it relates to the growing attraction between Gennarino and Raffaella towards the film’s third act where the former would try to rape the latter after having to endure too many insults from her. Yet, it would become more baffling when Raffaella seems to enjoy playing the submissive in this relationship that starts off as one-sided but it would create this balance where the two find some middle ground in their ideals as well as their fondness for one another. Still, Wertmuller is concerned about the effect of the idea of a man and woman stuck on an island as its aftermath would create an interesting dynamic. Especially by that idea of having to return to their old life but also the conflict of going back to the island to continue the new life they had which was filled with little complications and the ideas of modern society. Overall, Wertmuller creates an engaging and evocative film about a man and woman from different social classes and political ideals stuck on a deserted island.

Cinematographer Ennio Guarieri does brilliant work with the film’s cinematography in the way it captures the beauty of the locations while emphasizing on realistic and natural lighting for the scenes in the small port towns as well as the scenes on the island. Editor Franco Fraticelli does excellent work in the editing with its approach to jump-cuts and other rhythmic cuts to play into the film’s humor and some of its dramatic moments. Art director/costume designer Enrico Job does fantastic work with the clothes that Gennarino and Raffaella wear to play into their social background as well as the look of the boat and the shack that Gennarino finds on the island. Sound mixer Mario Bramonti does terrific work with the sound as it play into the locations as well as the conversations that are heard on the boat as well as where Gennarino and Raffaella are in parts of the island when they’re far apart. The film’s music by Piero Piccioni is incredible for its mixture of jazz pieces with elements of somber classical music and operatic-like pieces as well as some pop ballads to play into the drama and romance.

The film’s marvelous cast feature some notable small roles from Aldo Puglisi as a friend of Gennarino on the ship, Eros Pagni as a yacht crewmember in Pippe, Isa Danieli as Gennarino’s wife Anna, and Riccardo Salvino as Raffaella’s cuckold husband Signor who constantly argues with her and often loses those arguments. Finally, there’s the phenomenal duo of Giancarlo Giannini and Mariangela Melato in great performances in their respective roles as Gennarino Carunchio and Raffaella Pavone Lanzetti. Giannini brings a fiery energy as a man that is intent on defending his views as well as trying to instill his own power on the island as well as display some vulnerability when he falls for Raffaella. Melato has this air of charm to display the bitchiness of her character as she is arrogant and insulting where it is a joy to watch. Giannini and Melato have this amazing rapport between each other where they want to kill each other at times but also want to fuck each other as they are a big highlight of the film.

Travolti da un destino nell’azzurro mare d’agosto is a tremendous film from Lina Wertmuller that features spectacular performances from Giancarlo Giannini and Mariangela Melato. Along with its gorgeous visuals, an intoxicating score, and powerful themes on social, sexual, and gender politics set in a deserted island. It’s a film that is quite confrontational in the way it deals with a lot of ideas but it’s also this unconventional romantic comedy of sorts that is willing to ask big questions about the roles of men and women and their social environments. In the end, Travolti da un destino nell’azzurro mare d’agosto is a sensational film from Lina Wertmuller.

I've never heard of this one before...and man that's a long-ass title. The premise sounds ready-made for a sappy romance, but it sounds like it avoided that, mostly.

This is one hell of a title, but based on the description I don't think this one is for me. I'm glad you enjoyed it though!

@Wendell-If you've seen the 2002 remake Swept Away by Guy Ritchie and starring Madonna, that film completely missed the point of what Lina Wertmuller wanted to do. That remake was SHIT. It's far more complex as well as confrontational as I'm not sure today's audience would accept this film. Especially for the fact that it's written and directed by someone who would become the first woman nominated for an Academy Award for Best Director.

@Brittani-It might be complex and intense for you which I can understand but if you've seen Guy Ritchie's remake, you would realize what got lost from that awful piece of shit movie.