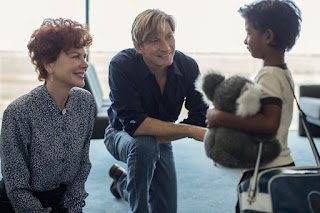 Based on the book A Long Way Home by Saroo Brierley and Larry Buttrose, Lion is the true story of a man who was separated by his family as a young boy where he was adopted by an Australian couple as he would later go on a search to find his original family. Directed by Garth Davis and screenplay by Luke Davies, the film follows the path of a man who trying to find his family with the help of those who cared about him including his adoptive family. Starring Dev Patel, Sunny Pawar, David Wenham, Rooney Mara, Divian Ladwa, and Nicole Kidman. Lion is a rich and evocative film from Garth Davis.

Told largely in the span of more than 25 years, the film follows a young boy who is separated from his older brother where he accidentally boards a train and is suddenly lost where he’s later adopted by an Australian couple who would raise him. It’s a film that follows the journey of a boy searching for his family only to restart the search many years later as a man where he begins to raise questions about himself and what happened to his mother, his older brother, and younger sister. Luke Davies’ script doesn’t waste time early in the film where the young Saroo (Sunny Pawar) follows his older brother Guddu (Abhishek Bharate) who is trying to find work while Saroo naps at a bench on a train where he accidentally enters a train that leaves where he arrives in Calcutta several days later. Much of the first act has Saroo lost in Calcutta trying to find his way back home but has no idea where he’s at nor does he speak Bengali since he speaks a more rural Hindu-based language.

He would encounter people that might seem good but he immediately realizes that it’s not what it seems until he’s taken into an orphanage where he is later aided by a woman in the orphanage in finding his family but has gotten no response. Yet, she would tell him that an Australian couple in John Brierley (David Wenham) and his wife Sue (Nicole Kidman) are interested in adopting him. The second act largely takes place in Tasmania, Australia where Saroo finds a home and a family that loves him where they adopt another Indian child in Mantosh (Keshav Jadhav) who has a hard time adjusting to his new surroundings. 20 years later as the older Saroo (Dev Patel) is training to manage hotels while he dates an American student in Lucy (Rooney Mara), Saroo gets a reminder of his old home forcing him to go into a search to find his family through the usage of Google Earth. Though he is reluctant to tell his adopted parents on what he’s doing, it would become an obsession that nearly drives him apart from those who care about him.

Garth Davis’ direction is definitely mesmerizing for not just the way he captures a man caught between two different worlds but wanting to hold on to them as well as make peace with the world he was lost in when he was a child. Shot on various locations in India such as Kolkata and Melbourne, Australia along with Tasmania, the film does play into this journey that a boy would take as he would travel from Khandwa to Calcutta as Davis would use a lot of wide shots to establish the locations as well as the sense of wonderment that the young Saroo would endure. Much of Davis’ direction is intimate with its usage of hand-held cameras for the close-ups as well as the medium shots to capture Saroo’s family life with John and Sue. Though a lot of Davis’ compositions are straightforward, there are elements of style late in the second act where the older Saroo would see his older brother at a certain location as well as paralleling images to play into a location in Australia and matched with India. The usage of Google Earth is crucial to the story as it play into Saroo’s search and what he can remember about certain locations which leads to the film’s climax where he returns home to see if his family is still there. Overall, Davis crafts a riveting and touching film about a man’s journey to find his family with the support from the people who raised and cared for him.

Cinematographer Greig Fraser does brilliant work with the film’s cinematography with its usage of natural lights for many of the exterior scenes with some low-key lights for some of the interior/exterior scenes at night. Editors Alexandre de Franceschi does excellent work with the editing with its usage of jump-cuts, stylish match cuts, and other rhythmic cuts to play into the drama. Production designer Chris Kennedy, with set decorators Nicki Gardner and Seema Kashyap plus art directors Janie Parker and Ravi Srivastava, does fantastic work with the look of the home that John and Sue live in as well as Saroo’s home in Melbourne plus some of the places in India. Costume designer Cappi Ireland does nice work with the costumes from the ragged clothes of the young Saroo walking around in India to the more casual look of the older Saroo and the people in his life.

Visual effects supervisors Julian Dimsey and Sid Jayakar do terrific work with some of the film’s minimal visual effects that relate to Google Earth and a few moments of set dressing. Sound designer Robert Mackenzie does superb work with the sound as it play into the many locations as well as the array of sounds that Saroo remembers from his time as a child. The film’s music by Hauschka and Dustin O’Halloran is wonderful for its mixture of Indian string music with some ambient textures to play into the sense of wonderment that Saroo endures while music supervisor Jemma Burns provide a mixture of music ranging from Indian-pop to electronic music and pop from acts like Hercules and Love Affair, Sia, Enigma, and Mondo Rock.

The casting by Kirsty McGregor is marvelous as it feature some notable small roles from Riddi Sehn as a man in a café who would find the young Saroo and take him to the authorities in the hope his family would find him, Tannishtha Chatterjee as a young woman in Calcutta who finds Saroo and gives him shelter for a while, Nawazuddin Siddiqui as a friend of that woman who has ideas for Saroo that makes the boy uncomfortable, Keshev Jadhav as the young Mantosh, Abhishek Bharate as Saroo’s older brother Guddu, Divian Ladwa as the older Mantosh who remains a troubled soul, Priyanka Bose as Saroo’s biological mother, and Deepti Naval as Saroj Sood who is an outsider of the Indian orphanage system as she would be the one to make sure Saroo finds a good home and would get him adopted by the Brierleys. David Wenham is superb as Saroo’s adoptive father John Brierley as a kind man that is very patient with Saroo and Mantosh as he is also someone that is becoming concerned with the former’s growing distance from everyone. Rooney Mara is fantastic as Lucy as an American student who becomes Saroo’s girlfriend as she is concerned about his distance as she wants to help him find his family.

Sunny Pawar is excellent as the young Saroo as this young boy who is trying to find his way back home as he endures poverty, different language and cultural barriers while eventually finding a home and a family that loves him. Dev Patel is brilliant as the older Saroo as a man who finds himself dealing with his identity as well as the need to find his family where his obsession nearly drives him away from those who care about him. Finally, there’s Nicole Kidman in a truly radiant and intoxicating supporting performance as Saroo’s adoptive mother Sue as she provides this air of warmth and gracefulness from the first scene she’s in as a woman that is full of love where it’s Kidman at her most restrained as well as one of her finest performances.

Lion is an incredible film from Garth Davis that features great performances from Sunny Pawar, Dev Patel, and Nicole Kidman. Along with its supporting cast, gorgeous locations, and a touching story of loss and the need to return home. It’s a film that captures the journey of a boy who becomes a man in his need to find his original family as well as bring together those who raised and cared for him. In the end, Lion is a sensational film from Garth Davis.

I was pleasantly surprised by this one. It was a happy feel-good story, but it did it in a way that didn't grate. Patel was the biggest surprised of all. I'd heard he was really good before seeing it but I didn't quite believe it because he's never struck me as a performer of any depth. However, like you, I think he was brilliant.

I'm so glad you liked Lion! The trailer pulled at my heartstrings but I didn't expect to fall in love with the story as much as I did. That ending really hit me hard.

@Wendell-Patel really surprised me in this film as he was really good in this yet I was more moved by Nicole Kidman based on her presence alone as I found myself in tears in her first scene as she just exudes this sense of grace and warmth.

@Allie Adkins-The ending is amazing as I just love to see the real-life footage which made it more special.

@Brittani-Same here and I'm also glad Nicole Kidman got an Oscar nod for the film as she was just incredible. Then again, she's always incredible.

I really didn't care to see this one. I'd read the book and couldn't really imagine it being my thing, movie-wise.
BUT, while at TIFF that year, it was getting such enormous buzz (enough that they added an additional screening, which usually means it's in contention for the top prize) so I traded in tickets I had for I Am Not Your Negro and saw this instead, and it was quite good. Like you, I really liked the Nicole Kidman character and I don't normally like her. I was really moved by her position. Anyway, Room ended up taking top prize that year and I saw and loved that one too, so all was well.

@assholeswatchingmovies.com-Wait a minute, didn't Room won the prize in 2015 as Lion and I Am Not Your Negro came out a year later? La La Land won the prize that year. I'm a fan of Nicole Kidman and usually expect her to be good but I didn't expect her to completely disappear into playing a character that was ordinary yet carried such warmth.

This most definitely sounds worth watching. I missed it in cinemas but now want to see it for Patel and Kidman.

@vinnieh-See it. It's really worth watching though my mother found it to be sad but that's good in my opinion.

That was such a lovely film! Kidman did wonders in such short screentime

@Sati-I know. She could read a phone book on a toilet and I would pay good money to see that.