Thursday Movie Picks: Once Was Enough (Movies You Don't Want to Watch Again)

For the second week of 2018 as part of Wandering Through the Shelves' Thursday Movie Picks series hosted by Wanderer. The subject is on movies that have been seen once and never want to be seen again. Whether it’s something horrible or something too intense that one doesn’t want to experience it ever again. Here are my three picks: 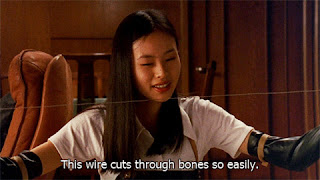 From Takashi Miike comes a horror film that I hope to never see again because it scared the fuck out of me. The film is about a man who tries to find a new wife following the death of his wife as the woman he picks turns out to be a complete psychopath who had killed previous suitors. Yet, it’s the ending that is just absolutely fucked up as I still get chills whenever I hear it. 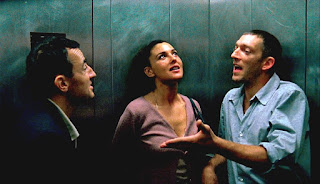 Gaspar Noe is a filmmaker that anyone either loves or hates depending on one’s taste as his second full-length feature film is a mind-numbing experience that is a true one-timer. It’s about a couple who goes out with a friend on a night on the town that eventually turns tragic as it’s mainly told in reverse. Notably as it includes a long-standing, nearly-one take rape sequence in which Monica Bellucci is raped by a sadistic man that is just too brutal to watch as it had an extremely notorious reaction in its premiere at the 2002 Cannes Film Festival that involved walk-outs, fainting, screams, and all sorts of shit. 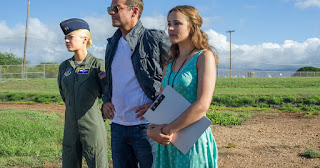 Unlike the previous picks on this list as they were polarizing films that are extremely controversial made men who are artists in their own right. This is a film made by someone who not only plays it too safe in his comfort zone but also made a film that is really one of the worst films ever made. It’s about a man working for a military contractor who goes to Hawaii where he meets an old flame while falling for an air force pilot as it’s got no real characters, contrite storylines, Bill Murray phoning it in, and some very racist elements in which native Hawaiians live in trailer parkers while everyone else live in comfortable homes or hotel rooms. Oh, there is also the fact that almost the entire film is accompanied by music to the point that Alec Baldwin asks the DJ to play Tears for Fears. That’s how bad it is. Fuck you Cameron Crowe.

Oh my gad Aloha was so bad. I remember ther was buzz about it because Cameron Crowe, but ah jeez it was terrible. I'm not a big Crowe anyway but this was baaaaad.

I got through 10 minutes of Audition and never went back to it. Since then I have heard bits and pieces and I don't like what I'm hearing.

Aloha was dull, muddled and listless. I really watched only the first 15 minutes or so with any real effort and then it was so lackluster I started to clean and it became uninvolving background noise.

Haven't seen the others and they don't sound too alluring so I'll probably not seek them out.

With two of mine I went with films that I didn't hate but feel no reason to look at again, my first the title fit very well but it's crap.

Once is Not Enough (1975)-Oh but it most certainly was…more than enough to be frank!! Based on the theme I couldn’t resist but this terrible film based on a trashy Jacqueline Susann novel about a naïve selfish and rather stupid rich girl (Deborah Raffin) who becomes involved with an much older man (David Janssen) as a substitute for her obsession with her father (Kirk Douglas) is tasteless, crass and badly acted by everyone except Alexis Smith and Brenda Vaccaro (who somehow managed to rise above the muck and be nominated for Best Supporting Actress). For something so salacious it’s remarkably dull.

La Ronde (1950) - Max Ophuls’s venerated roundelay of a circle of love affairs, some serious some frivolous in 1900 Vienna is a supposed mad whirl of joie de vivre. I love many other of Ophuls’s films, Letter from an Unknown Woman, The Earrings of Madame de… & The Reckless Moment among them, so I was really looking forward to this film but while I didn’t hate it I found it rather silly and too frou-frou to take seriously and can’t see myself returning to it again.

Moonrise Kingdom (2012)-Two youngsters fall in love and run away together which leads a search party to set out for them while they have quirky adventures. I know I’ll probably take heat for this one and maybe it’s because Wes Anderson films by and large leave me cold but while others were telling me how charming and lovely this was I thought it was forced, trying too hard for a feeling of whimsy. Again I didn’t hate it but I had a big feeling of So What? at the film’s conclusion.

Cameron Crowe just can't seem to get anything to work. It's been almost 20 years since he made something worth watching. I can handle Elizabethtown, mostly BECAUSE of the soundtrack, but it's not much. As for Irreversible? Yeah. That movie is...I don't even know. I've only read about it. Not sure I'd want to do that to myself. Haven't seen the first pick. Probably won't.

Oh man, good call on Audition. That film is something else. I refuse to watch a movie with that long of a rape scene so I've never seen Irreversible and never will, and Aloha looked boring to me too.

Audition is awesome. I completely understand it scaring the hell out of you. I'll likely watch it several more times since I own it. Haven't seen Irreversible and I'm not sure I will. Haven't bothered with Aloha, yet. Trying to avoid it because I've heard it's shitty.

I don’t think I will see any of these films. I don’t like the horror films because they scare the hell out of me although this one sounds the best of the 3. When there is a rape scene to the point where it seems too long, unnecessary and too uncomfortable, I feel like the director gets off on it then. It reminds me of The Accused which is an excellent movie but I always felt the rape scene was unnecessary and a disservice to women. I think I will pass on Aloha

The only one I've seen is Aloha and yeah it's not good. Emma Stone is supposed to be Asian or part Asian...well at least from the name...which she most definitely do not look the part and I can't remember what excuse they gave for that,

@Katie Hogan-I was a fan of Cameron Crowe but after Aloha. Never again. It wasn't that he made something even worse than Elizabethtown which I didn't like at all but it was for the fact that he was playing it too safe and that he never took any chances to do anything new. As for Audition, I don't blame you for not wanting to watch the rest of that film. I saw it one night and it gave me nightmares. I don't want to be responsible for giving anyone nightmares.

@joel65913-La Ronde and Moonrise Kingdom are films I'll see again as I'm a fan of the works of those 2 filmmakers. I guess it's not for you. Plus, my two choices are all about provocation and wanting to make the audience extremely uncomfortable and I like that.

@Kevin-Elizabethtown was bad. That was the work of someone who was trying to create something delicate and with heart but it backfired and there weren't any real characters. Aloha is like that film but much worse. This is where you have a cast of talented actors and not give them anything real to play as they're all playing type A or type B. Plus, I really think someone should go to Crowe's house and steal his entire music collection and then destroy it. He has an unfortunate tendency to use music as a narrative crutch and that is just lazy-ass storytelling.

@Brittani-You know your reaction to Beauty & the Beast? That is the same reaction I had towards Aloha.

@Wendell-I don't blame you for not wanting to watch Irreversible since it's so intense. Since I know you're not into Enter the Void, I can understand not wanting to watch anything Gaspar Noe does. As for Aloha, stay the fuck away from that piece of shit. It will offend you as it has white people living in comfortable places while native Hawaiians live in fucking trailer parks. Alexander Payne never did that with The Descendants and at least he had the heart to show that native Hawaiians do live in nice houses.

@Birgit-Irreversible I can understand isn't for you but I do think the rape scene is necessary as it relates to the narrative. Gaspar Noe wasn't trying to get off on that scene but rather just provoke and piss people off. That's what he's known for and I applaud that. Aloha is just offensive for how stupid it is.

@Sonia Cerca-Unless you're a Crowe completist, I'd say don't fucking watch it. I saw it in the theaters and it was the worst thing I've seen since Tomcats in the theaters.

@Wanderer-That was just lazy-ass casting and excuses from Cameron Crowe who really had his head up his own ass when he did that film and I really do think someone should gather his entire music collection and destroy it. Then he'll need to learn what real pain is.