For the first week of 2018 as part of Wandering Through the Shelves' Thursday Movie Picks series hosted by Wanderer. We focus on films with characters whose name is in the film’s title. Here are my three picks: 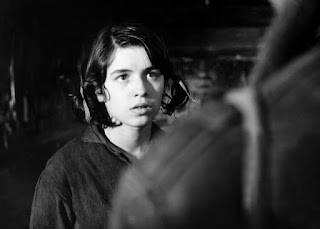 From Robert Bresson is one of his most beloved films as it explores a young girl who endures the abuse from her alcoholic father while dealing with a dying mother and a baby brother. Yet, she also endures ridicule from classmates and her teacher for the ragged clothes she wears as it’s a film where this young girl tries to find some kind of happiness in her small town as her encounters with various individuals would lead to trouble and despair. It is a dreary film but truly an evocative film to see for anyone interested in the works of Robert Bresson.

In this adaptation of Thomas Hardy’s novel about the misfortunes of a young peasant girl who is supposedly connected to an aristocratic family comes one of Roman Polanski’s towering achievements. Starring Nastassja Kinski in the titular role, the film follows the life of a woman trying to get her claim of this fortune in the hope she can give those close to her a good life but there’s people that want to prevent that from happening. Even as she rejects the advances of a man claiming to be her cousin in favor of a preacher’s son as it’s really a film about a woman ruined all because of a connection towards an aristocratic family name. 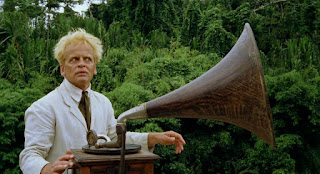 From Werner Herzog is a film that will probably never be made by Hollywood as it took great balls for Herzog to pull off the impossible. With Klaus Kinski as the titular role as this man who is given the chance to exploit a piece of land that hadn’t been discovered in the Amazon to fund his opera house. It’s a film that is about the sense of imagination where man goes against nature as it has the reality of dragging a steamboat on top of a fucking mountain. All because he wants Enrico Caruso to sing for him at the Amazon!

I haven't seen any of your picks this week. I'm behind. lol

Haven't seen any of these. Fitzcarraldo is the one I plan on seeing most, though. I've heard so many great and/or insane things about it.

I haven't seen Mouchette but did just within the last month see Bresson's A Man Escaped which was quite good so I'll have to track this one down.

I thought Tess drug occasionally but it was certainly a feast for the eyes and overall a fine film. Knowing what to expect now I should give it another view and see if it engages me more.

Fitzcarraldo was a challenging watch and having seen Burden of Dreams a seeming nightmare to make but a worthwhile investment of time. I don't think I'll be watching it again anytime soon but I'm glad I saw it.

I did a little theme within the theme this week with my first a particular favorite of mine and the title gave me the idea for the others.

Mary, Mary (1963)-Struggling New York book publisher Bob McKellaway (Barry Nelson-who is fine but his role has Jack Lemmon’s name all over it) is getting ready to marry his socialite fiancée Tiffany (a knockout Diane McBain) as soon as his divorce from first wife Mary (Debbie Reynolds) comes though. However his accountant Oscar (a delightful Hiram Sherman) requests Mary come up from Philadelphia for the day to straighten out some tax issues before the decree becomes final. Once together Bob and Mary start to jab wittily at each other and before you know it their attraction starts to resurface aided by the attentions to Mary of movie star and prospective author Dirk Winsten (Michael Rennie) and an inconvenient snowstorm. Betrays its stage origins (the play ran for over 1500 performances) but is often clever and witty. Both Rennie and Nelson repeat their Broadway roles.

Rachel, Rachel (1968)-Rachel Cameron (Joanne Woodward) is a lonely middle-aged schoolteacher. Never married and still a virgin she lives a life of quiet desperation with her widowed mother over the funeral home left to them by her father. Over summer vacation she goes to a revival meeting with her best friend fellow teacher Calla (Estelle Parsons) during which she has an epiphany and begins to emerge from her shell taking her life in unexpected directions. Directed by Paul Newman as a vehicle for his wife this received four Oscar nominations including ones for Woodward, Parsons and Best Picture.

Corrina, Corrina (1994)-Widower Manny Singer (Ray Liotta) is frustrated in his search for a nanny for his young daughter who has withdrawn into herself since her mother’s death and stopped speaking. When Corrina Washington (Whoopi Goldberg) applies she is able to break through the child’s reserve and is hired. As time passes she and Manny discover an attraction and grow closer but all does not go smoothly.

And to show this is not strictly a female happenstance:

Buddy Buddy (1981)-Trabucco (Walter Matthau) a hitman on a job to rub out a Mob informant before he testifies is waylaid by Victor Clooney (Jack Lemmon), the suicidal guy in the hotel room next door. Once he talks him off the ledge he plans to jump from their lives become intertwined and nothing goes as planned. Billy Wilder’s final film as director would seem to have everything needed to succeed, a reteaming of Lemmon and Matthau, a quality supporting cast and the great man himself behind the camera but even he admitted that it was more or less a miss.

I haven’t seen any of these but Tess is one I have wanted to see since it came out.

I like Tess. It is such a tragedy all due to the ambition of her parents, pushing her towards people they didn't know.

@Brittani-See them, they're worth your time and they're very educational into the art of cinema.

@Wendell-YOU NEED TO SEE FITZCARRALDO!!!!!!! It had the fucking balls to drag a two-ton steamship on top of a fuckin' mountain! No computer effects, they really fucking did that.

@joel65913-Corinna, Corrina is alright though too schmaltzy for my taste. I do want to see Buddy Buddy only because it's Billy Wilder's last film.

@Birgit-See it as it's just an incredible film.

@Wanderer-It is as well as the fact that it showcases the fallacy of ambition and how it can ruin everything.