For the third week of 2018 as part of Wandering Through the Shelves' Thursday Movie Picks series hosted by Wanderer. We venture into the Sundance Film Festival as it’s the festival that begins the New Year in showing new films often from filmmakers that are ready to break-out or from veterans wanting to show something new. Here are my three picks: 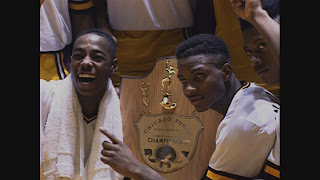 Winner of the 1994 Audience Award Prize for Documentary is definitely a film where if one person wants to ask anyone what is a documentary film. It’s this one as it covers five years in the life of two different boys from the inner cities in Chicago as they hope to make it through their skills in basketball to give their family better lives. It also play into the different paths these two boys would take to go into college in the hopes they would become professional as it’s a film that everyone whether they’re sports fans or not need to see. 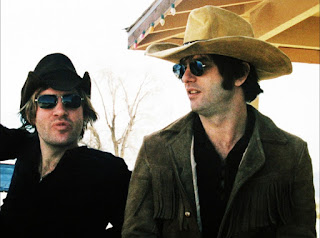 Winner of the 2004 Grand Jury Prize for Documentary is a film about two different bands who share a common interest to succeed and create music that is unique yet their paths to become successful would also lead to these two bands becoming rivals. Ondi Timoner’s documentary about the Dandy Warhols and the Brian Jonestown Massacre showcases the many fortunes and misfortunes two bands would endure with the former becoming very successful around the world while maintaining their own independence from the industry. The latter for all of their brilliance and talent would struggle due to egos, drugs, and all sorts of shit as they do whatever they can to get their music heard.

Winner of the 2012 World Cinema Audience Award for Documentary is a film that is about an American musician who never was big in his home country but somehow found an audience in South Africa. It follows two fans who wondered if the musician in Sixto Rodriguez is alive and well as his music is discussed as well as what it meant to South Africans and it turned out that he is where his career is unexpected revive in a country that is often seen from the outside of the Western World. It’s a film that showcases what the documentary can do and how it can get people’s attention to discover something they never heard of and embrace it.

A documentary theme within the theme! The only one I've seen is Hoop Dreams which was very good and shows what a documentary that is well made is capable of.

I haven't seen the other two though I've read about Sugar Man and will get to it eventually. Dig sounds worth seeking out as well.

This week was tough in a way since I had no clue which films played the festival but a little Googling fixed that.

Silverlake Life: The View from Here (1993) - Won the Grand Jury Documentary Prize at Sundance. Mark Massi and Tom Joslin are in a long time committed relationship, they have also both been diagnosed with AIDS which at the time was a death sentence. We live through their final journey with them. The film has touches of gallows humor but it is a harrowing, heartbreaking trip to an inevitable destination that will leave you emotionally bereft.

Big Night (1996) - Won the Waldo Salt Screenwriting Award at Sundance. Primo (Tony Shalhoub) and Secondo (Stanley Tucci-who co-wrote and co-directed this film) are immigrant brothers who operate an Italian restaurant in America. Primo is a culinary genius, but hot tempered and determined not to squander his expertise making the routine dishes that customers expect. Secondo is the smooth front-man, trying to keep the restaurant financially afloat, despite few patrons other than a poor artist who pays with his paintings. Their friendly competitor who owns a nearby enormously successful restaurant offers a solution, a special benefit lead by a big-time jazz musician who is a friend of his. Excitedly Primo begins to prepare his feast of a lifetime for the brothers' big night. Amusing comic drama with a terrific cast alongside Tucci and Shalhoub including Isabella Rossellini, Minnie Driver and Liev Schreiber.

You Can Count on Me (2000) - Won the Waldo Salt Screenwriting Award at Sundance. Independent, responsible Sammy Prescott (Laura Linney) is a single mother working as a loan officer in upstate New York who is at first delighted when her errant, feckless brother Terry (Mark Ruffalo) shows up unexpectedly for a visit after a long period of not being in touch. When his short visit stretches into an extended stay they both slowly begin to reexamine their lives as their childhood bond strengthens anew. Beautifully acted this is one of the best looks at sibling rivalry and connection ever made.

As you know, we have a match in Hoop Dreams. Searching for Sugar Man is another great doc. It's one of the most fun I've ever seen. Haven't watched your other pick, though.

Searching for Sugarman surprised me. I wasn't expecting to be all that into it, and I enjoyed it. I'm still trying to remember if I have seen Hoop Dreams or not. For some reason I keep thinking I watched it in school.

Love that you went with docs. Hoop Dreams and Searching for Sugar Man are both excellent!

@joel65913-I've seen Big Night and You Can Count on Me as they're both great films as they're pretty much essential. Silverlake Life is a film I'm not sure I've heard but I hope to see it out.

@Wendell-DiG! is kind of an obscure film to find but I was fortunate to see it during my time as a volunteer at the 2004 Atlanta Film Festival.


@Brittani-I think it's time for a re-watch of Hoop Dreams as it is one of the best.

@Kevin-Documentary films are the reasons why I love Sundance despite some of its unfortunate tie-ins with corporate sponsors and attracting celebrities who are there for parties and bullshit.

I loved how that Sugarman documentary introduced myself (and many others) to the music and life of Sixto Rodriguez. A story worth telling.

@Chris-Same here. That is what documentaries are supposed to do.