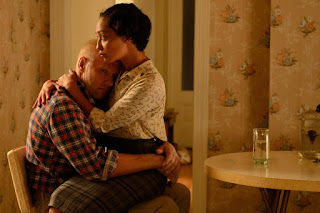 Based on the 2011 documentary film The Loving Story by Nancy Buirski, Loving is the true story of a white man who falls for and marries a black woman in the 1950s that would cause a lot of controversy and eventually a case in the Supreme Court. Written for the screen and directed by Jeff Nichols, the film is an exploration of two people who fall in love but would get in trouble over the fact that they’re people of who different color when interracial marriage was considered forbidden in 1950s America as the couple of Richard and Mildred Loving are respectively played by Joel Edgerton and Ruth Negga. Also starring Michael Shannon, Nick Kroll, and Marton Csokas. Loving is a somber yet evocative film from Jeff Nichols.

The film follows the true story of Richard and Mildred Loving who in 1958 drove to Washington D.C. from their home in a small town in Virginia to get married and thus would cause trouble in their home state leading to a nine-year battle for the right to stay married and stay in their home state. The film is a simple story of a couple where Richard is white and Mildred is black yet the two are in love and decide to get married when the latter becomes pregnant with their first child. Jeff Nichols’ screenplay doesn’t begin with how Richard and Mildred met but rather the moment they decide to marry as the former spends much of his time socializing with other African-Americans who see him as just another person to socialize with as his mother live in the same neighborhood that they live in. Though they hope by marrying in Washington D.C., nothing would go wrong as Richard and Mildred are just quiet and reserved people that don’t want to cause any trouble. Yet, the government in Virginia and many others see their action as something immoral as they would be forced to move to Washington D.C. with their growing family until they get the help from ACLU lawyer Bernard S. Cohen (Nick Kroll).

Nichols’ direction is understated in its approach to the story since it doesn’t try to go for any kind of lavish or grand visual statement. Instead, Nichols goes for something more intimate and dream-like in his direction as much of the film is shot on location on various locations in the state of Virginia where it does play into this period that is vibrant but also stuck between two different ideas with the emergence of the Civil Rights Movement of the 1960s. There are some wide shots to play into the locations as well as the world that the Loving are in that would include shots of fields and vast farmland. Yet, Nichols would emphasize more on close-ups and medium shots to get a look into the family life of Richard and Mildred whether it’s in the streets of Washington D.C. or at the farms of Virginia. Notably as the dramatic elements are told in a very low-key presentation in order to avoid the many conventions of melodrama.

The historical context of the film is prevalent but only in the background where the Loving family would hear about the growing Civil Rights Movement but they feel at first that it doesn’t concern them nor do they want to be involved because of their reserved personalities. Even as the lead-up towards the third act where Richard and Mildred cope with the unexpected media attention as the former is extremely uncomfortable while the latter is willing to speak but is also reluctant to divulge too much. Nichols would show how overwhelming the attention is as well as some of the prejudice that the couple would face as Richard would get a bigger understanding of what African-Americans deal. All of which forces him and Mildred to challenge the idea of marriage in America but do it very quietly as an act of defiance from a loud resistance. Overall, Nichols crafts a tender yet intoxicating film about a white man and a black woman wanting to stay married amidst the racial strife of the late 1950s/early 1960s in America.

Cinematographer Adam Stone does excellent work with the film’s cinematography with its naturalistic and dream-like feel for some of the farmland locations in the daytime as well as some low-key lighting for some of the scenes at night. Editor Julie Monroe does terrific work with the editing as it is largely straightforward in terms of the drama with bits of jump-cuts in some parts of the film. Production designer Chad Keith, with set decorator Adam Willis and art director Jonathan Guggenheim, does brilliant work with the look of the homes that the characters live in as well as the look of the courtrooms and places of what they looked like in those times.

Costume designer Erin Benach does nice work with the costumes as it is largely straightforward for what many of the clothes looked like in the early 1960s. Sound editor Will Files does superb work with the sound as it play into the atmosphere of the locations as well as some of the scenes in a few drag races that Richard goes to. The film’s music by David Wingo is incredible for its low-key score that has elements of ambient music and soft string pieces that doesn’t play into any kind of bombast while music supervisor Lauren Mikus provides a fun soundtrack that features a mix of rock n’ roll, blues, and R&B of the times from acts like Ritchie Valens, William Bell, Jerry Butler, Earl King, the Empires, Sonny Terry and Brownie McGhee, Magic Sam, and Clarence Reid.

The casting by Francine Maisler is marvelous as it feature some notable small roles from Sharon Blackwood as Richard’s mother who is also a midwife, Terri Abney as Mildred’s sister Garnet, Alano Miller as family friend Raymond Green, David Jensen as a judge that orders Richard and Mildred to leave Virginia, Bill Camp as Richard and Mildred’s attorney Frank Beazley in their early court cases, Christopher Mann and Winter Lee-Holland as Mildred’s parents, Jon Bass as Civil Rights attorney Phil Hirschkop, and Michael Shannon in a small yet terrific performance as LIFE magazine photojournalist Grey Villet who would be invited Richard and Mildred’s home as he gets to see what their life is like without exploiting them too much. Marton Csokas is superb as Sheriff Brooks as a local sheriff who doesn’t like what Richard and Mildred are doing as he’s intent on getting rid of them yet doesn’t do it in an aggressive manner but still be calm yet threatening. Nick Kroll is fantastic as Bernard Cohen as ACLU attorney who takes on Richard and Mildred’s case hoping it would mark a change as well as see that they’re a couple that isn’t doing anything wrong.

Finally, there’s the duo of Joel Edgerton and Ruth Negga in sensational performances in their respective roles as Richard and Mildred Loving. Edgerton provides a gruff yet low-key performance as a man that just minding his own business as well as be a good person to his wife and kids. Negga is just as reserved as Edgerton while being very soft-spoken in giving out interviews as well as be graceful in the way she carries herself. Edgerton and Negga together are a joy to watch in just how they display that sense of warmth and love for each that just feels right.

Loving is a tremendous film from Jeff Nichols that features incredible performances from Joel Edgerton and Ruth Negga. Along with its supporting cast, gorgeous visuals, and a compelling story that play into the real-life events of this couple. It’s a film that showcases the idea of love and what it can do in having two people fight in the most subtle way to showcase their commitment to one another. In the end, Loving is a spectacular film from Jeff Nichols.

Jeff Nichols hasn't made a film I haven't liked yet. I really enjoyed this one.

@Brittani-He has yet to disappoint me as well as he's pretty much consistent in his themes and the stories he wants to tell.

I got to see this one at TIFF. LOve love love the performances, very well-cast. It's not a flashy film, didn't feel like Oscar bait though it could have gone that way. I was surprised it went fairly under the radar when released.

@assholeswatchingmovies.com-I wanted to see it when it came out but like many films, it came and went. It's a really good film as it doesn't go for the tropes that is common with Oscar-bait films. I hate Oscar-bait films.