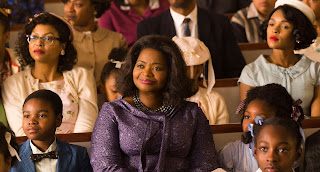 Based on the non-fiction book by Margot Lee Shetterly, Hidden Figures is the true story of female African-American mathematicians who worked at NASA where they would provide the numbers for the right flight trajectories for the Mercury space missions in the early 1960s. Directed by Theodore Melfi and screenplay by Melfi and Allison Schroeder, the film is an exploration of the small number of people whose contribution to the 1960s space race to be as important as those that flew into outer space. Starring Taraji P. Henson, Octavia Spencer, Janelle Monae, Kirsten Dunst, Jim Parsons, Glen Powell, Mahershala Ali, and Kevin Costner. Hidden Figures is an enchanting and exhilarating film from Theodore Melfi.

Set in 1961 and 1962, the revolves around a trio of African-American women who work at the Langley Research Center in Hampton, Virginia for NASA where one of the women would find the right mathematic problems for flight trajectories for the upcoming Mercury space missions during the 1960s space race between the U.S. and the Soviet Union. Though these three women try to deal with the work they have to do at a time where everything is segregated at the time as men and women work at different buildings with African-American women having to work in one different side of the building with white women. They all have a role to play in order to beat the Russians in the space race as they’re having a hard time catching up with them. The film’s screenplay by Theodore Melfi and Allison Schroeder does have a straightforward structure as it play into the obstacles the mathematician Katherine Goble (Taraji P. Henson), the aspiring engineer Mary Jackson (Janelle Monae), and supervisor Dorothy Vaughn (Octavia Spencer) face.

Yet, the script focuses largely on Goble who is a widowed mother of three girls as she is a gifted mathematician since she was a child yet is still undervalued until she is transferred to work with the Space Task Group led by Al Harrison (Kevin Costner) who would see what Goble has to offer. Still, she has to cope with the fact that she has to run half-a-mile to go to the bathroom since the closest one is only for white women until Harrison makes the decision to get rid of the ideas of segregation by knocking down a “colored only” sign in the women’s bathroom. While Goble would also have to endure the fast-paced world of getting results as well as deal with a supervisor in head engineer Paul Stafford (Jim Parsons) who is trying to impose his superiority over Goble. The script also showcase what Jackson and Vaughn go through as Jackson would work with Karl Zielinski (Olek Krupa) whom he sees as someone with potential and would encourage her to get her engineering degree.

For Vaughn who has been taking on the role of acting supervisor for her team, she still has to deal with her supervisor Vivian Mitchell (Kirsten Dunst) who tells Vaughn what she needs to do though she’s unaware that Vaughn would be the one to figure out the new IBM 7090 supercomputers and how they work. There is also a subplot as it relates to Goble’s personal life as she falls for a military officer in Jim Johnson (Mahershala Ali) who would eventually become her husband which would help bring some happiness to Goble just as she’s starting to find fulfillment in her professional life.

Melfi’s direction doesn’t have a lot of stylish visuals in order to capture a moment in time where it was an era of civil unrest as well as this sense of change emerging. Shot largely at the Morehouse College in Atlanta, the film opens with a look into Goble’s life when she as a child and how she became this unknowingly gifted child that could do math problems beyond anyone’s expectation. While Melfi would use some wide shots including some key scenes set in space, much of the film would have Melfi employ more straightforward shots to play into Goble and the need to do her work and stand out among many. Even as she would wear colorful dresses while the rest of her co-workers are seen wearing white shits and a black tie. The wide shots that Melfi creates in some of the buildings show that sense of disconnect between blacks and whites and their roles in NASA but it eventually becomes more intimate once they start to realize the value these women have for NASA.

Melfi would also play into light-hearted moments as it relates to some of the individual moments that Jackson would go through as she would file a petition to be allowed to get her engineering degree as well as Vaughn taking a library book that would allow her to understand the IBM machine. The film’s climax which revolves around the mission with John Glenn (Glen Powell) who has taken notice of Goble’s work and wants her to do the math as he sees her as someone of immense value. Though Goble at first isn’t part of this mission, Harrison realizes that everything they have been relying on with the IBM show some discrepancies in the calculations forcing him to have Goble at his side. It all play into what one person could do and make a small but important contribution to the space race. Overall, Melfi crafts a compelling and riveting film about three women whose small contributions to the 1960s space race would make a major difference for themselves and everyone else.

Cinematographer Mandy Walker does excellent work with the film’s cinematography from the usage of colors for many of the exterior daytime scenes as well as how some of the interiors are lit including some of the scenes set at night. Editor Peter Teschner does terrific work with the editing as it is largely straightforward with some rhythmic cuts to play into the drama. Production designer Wynn Thomas, with set decorator Missy Parker and art director Jeremy Woolsey, does brilliant work with the look of the offices and labs as it play into the environment the characters work at where it starts off that is a bit oppressive but then warms up once everyone is on the same page. Costume designer Renee Ehrlich Kalfus does amazing work with the costumes from the colorful dresses many of the African-American women wear at work and off work as well as the clothes that the white men/women wear which are a bit colorless to display their buttoned-down look.

Visual effects supervisors Chris and Mark LeDoux do fantastic work with the visual effects for the scenes set in outer space including the film’s climax during John Glenn’s Earth orbits. Sound designers Wayne Lemmer and Derek Vanderhorst do superb work with the sound in the way rockets sounded as well as the sparse elements in the way chalk and typewriters would sound. The film’s music by Hans Zimmer, Pharrell Williams, and Benjamin Wallfisch is incredible for its mixture of Zimmer and Wallfisch’s orchestral music to play into some of the low-key elements of the drama without anything bombastic as well as some of the soul-based music created by Williams who would also compile the film’s soundtrack to feature a lot of the music of the times including some of the soul music that was emerging during those times.

The casting by Victoria Thomas is great as it feature some notable small roles from the trio of Saniyaa Sidney, Ariana Neal, and Zani Jones Mbayise as Katherine’s daughters, Aldis Hodge as Mary’s husband, Donna Biscoe as Katherine’s mother who watches over her granddaughters, Karen Kendrick as the younger version of Katherine’s mother, Lidya Jewett as the young Katherine, Kimberly Quinn as Harrison’s secretary Ruth, Olek Krupa as the Jewish-Polish scientist Karl Zielinski who encourages Mary to get her degree as he sees value in her, and Glen Powell in a terrific performance as John Glenn who realizes the value in Katherine’s gift for mathematics as he sticks with her results rather than what everyone says. Jim Parsons is good as Paul Stafford as a head engineer who gives Goble problems to work on and not realizing what she could do as he is forced to accept what she’s able to offer.

Kirsten Dunst is fantastic as Vivian Mitchell as a supervisor who supervises all of the women while having to deal with Vaughn whom she knows is qualified but often tells her about the rules as it’s a low-key yet effective performance. Mahershala Ali is excellent as Jim Johnson as a military officer who woos Goble as he is fascinated by what he does and wants to be there for her. Kevin Costner is brilliant as Al Harrison as the Space Task Group director who takes notice of Goble’s work and realizes her value while making changes that he feels is necessary for everyone including Goble whom he realizes is a much smarter person than everyone else. Janelle Monae is amazing as Mary Jackson as a mathematician who aspires to be an engineer as she has something to offer as a famed scientist realizes that and gives her the chance to get her degree as it’s a performance full of charisma.

Octavia Spencer is incredible as Dorothy Vaughn as an acting supervisor who heads the African-American women’s section who is trying to get promoted while she would be the one person to figure out how the IBM machines work giving her the chance to be valued by everyone. Finally, there’s Taraji P. Henson in a phenomenal performance as Katherine Goble Johnson as the gifted mathematician who knows any kind of problem needed as she is the smartest person in the room that no one is aware of while dealing with some of the demands in her work as well as the need to be there for her daughters as it’s Henson in one of her triumphant performances to date.

Hidden Figures is a spectacular film from Theodore Melfi. Featuring a great cast, a rapturous story, gorgeous visuals, and a joyful music soundtrack. It’s a film that showcases people whose small contributions to something monumental would prove to have a lasting effort as this true story of these three women isn’t just inspirational but also prove that even those behind the scenes matter. In the end, Hidden Figures is a sensational film from Theodore Melfi.

I loved this movie, Taraji was really robbed of an Oscar nom for it, as was Janelle Monae.

@Brittani-It was a really good film and yes, Cookie should've gotten an Oscar nod. She's that damn good. In fact, I still think she should've had 2 Oscar nods as I really liked her performance in Talk to Me in which I thought she should've been nominated for Best Supporting Actress.

This was such a wonderful movie. I loved Taraji and Costner the most in the cast, they both should have been Oscar nominated. Spencer is good but I don't get her recent nominations

@Sati-I agree that Costner and Henson should've been nominated as they do give great performances. Spencer is someone who I feel is often one of the more reliable actresses working today as she does these little things in her performances that manages to do so much as it's always something about her that I like. It's the fact that she'll do something small but make it so extraordinary.