For the 12th week of 2018 as part of Wandering Through the Shelves' Thursday Movie Picks series hosted by Wanderer. The theme for this week is on nostalgia where it’s often about characters or something where everyone wants to look back at a moment where things were simpler and less complicated in comparison to a present-day surrounding. Here are my three picks: 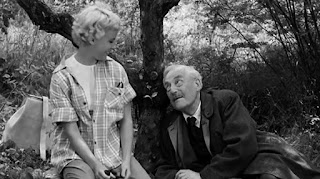 Ingmar Bergman’s road movie in which a professor goes on a trip with his daughter-in-law to receive an award where he reflects on his life in the past. It’s one on of Bergman’s quintessential films as well as one of his most accessible, in my opinion, as it plays into a man thinking about his time when he was young and the mistakes he’s made in his life. It’s a film that is rich and compelling as it features an incredible leading performance from Victor Sjostrom as a man haunted by his own faults and the hope to find an idea of redemption. 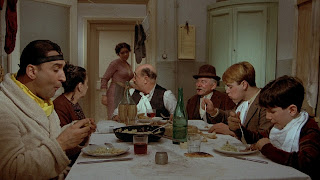 A classic film from Federico Fellini is a semi-biographical film about Fellini’s life growing up in a small town Italy. It’s a film that bear many of the elements that Fellini is known for such as the fascination towards women, extravagant images, childlike mischief, and innocence. All set during the era of Fascist Italy as Fellini reflects on this time in his life as there’s elements of melancholia but also a sense of joy into the innocence of childhood despite its time of darkness.

Guy Maddin’s 2007 film is truly a film that defies description and conventional ideas as it’s a mixture of documentary and fiction as it play into Maddin’s hometown. Told in a visual style that references home movies and newsreel, it’s a film that doesn’t try to be anything as it also pokes at legends of the town as well as lament of what used to be in Winnipeg when he was young and what it had become now. It’s a rich film that needs to be seen as it confirms Maddin as one of the true original voices in cinema.

Wild Strawberries is my favorite Bergman film of those I've seen. Gentle and elegiac with marvelous performances by Sjostrom and Ingrid Thulin.

Amarcord is a very recent view for me (within the last month) and I liked it quite a lot, not as much as some other Fellini's but it does have the proper nostalgic feeling for the week.

I haven't seen your last but it sounds interesting.

Being an old softie at heart I guess I love this sort of film so it took some doing to get down to just three but I'm very fond of all of these.

Meet Me in St. Louis (1944)-A year in the life of the upper middle class Smith family (including second daughter Esther played by Judy Garland) as they and their hometown prepare for the 1904 St. Louis World’s Fair. For the most part charming, sweet and bandbox pretty full of great songs-The Trolley Song, The Boy Next Door, Have Yourself a Merry Little Christmas (which was written expressly for Judy) etc.-this is interwoven with dark undertones most courtesy of borderline psychotic (though she’s meant to be seen as innocently eccentric) youngest daughter Tootie (Margaret O’Brien-who won a special Oscar). Wonderfully produced by the Freed unit and directed by Vincente Minnelli.

On Moonlight Bay (1951)-Based on stories by Booth Tarkington we are once again at the turn of the 20th century. In bucolic small town Indiana the upwardly mobile Winfield family has just moved into a bigger house that only the father likes until tomboyish daughter Marjorie (Doris Day) meets handsome neighbor, college student Bill Sherman (Gordon MacRae). Suddenly she gets in touch with her feminine side and she and Bill start a romance which goes along fine until her father finds out Bill is a nonconformist who doesn’t believe in marriage or other traditional values. But after many songs, several mishaps and lots of warm and fuzzies all ends happily. Followed by a sequel “By the Light of the Silvery Moon”

Radio Days (1987)-Told as a remembrance Joe (Woody Allen) recalls his youth (played by Seth Green) growing up in the 30’s and 40’s with his colorful and somewhat crazy family (including his parents who will argue about anything including which is the greater ocean-Atlantic or Pacific!) and people he encounters including the story of radio personality Sally White (a quite brilliant performance by Mia Farrow). Filled with beautiful period detail this captures both the period and a sense of youth.

I also picked Amarcord. I saw it years ago and I loved it. I think I'm going to rewatch it.

I can't believe I still haven't seen Wild Strawberries. That movie has been on my list for ages!

I've only seen Wild Strawberries, which I really liked. I remember thinking it was probably the closest thing Bergman would get to a road trip comedy.

I still have to see Wild Strawberries and it has been on my list for so long. It takes a lot for me to view a Fellini film and that last one sounds a bit bizarre.

@joel65913-Radio Days is definitely one of Woody's best films as it would've been easy to do a theme on nostalgia based on films by Woody Allen but I felt that's not challenging enough.

@Sonia-See Wild Strawberries, everyone who loves films have to see at least one film by Ingmar Bergman.

@Brittani-It is as he's also made films that are funny. I'd suggest Smiles of a Summer Night which is pretty funny.

@Birgit-Guy Maddin is bizarre but he is truly an original by using old film stock and methods and making it feel new again.

My Father’s Glory and My Mother’s Castle are both gorgeous and heartfelt examples of nostalgia. Lovingly shot and rendered.

@vinnieh-I haven't seen either of those films but I will certainly take a look.