For the 11th week of 2018 as part of Wandering Through the Shelves' Thursday Movie Picks series hosted by Wanderer. The subject is on films that anyone liked when they were children. It’s often movies that one can look back with a certain fondness as well as have some memory of when they saw it and their sense of joy for it. Here are my three picks: 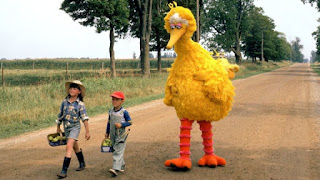 I was five-six years old when this film was playing constantly on HBO. It’s a film that still holds a place in my heart as it had everything I liked at the time. Muppets, Big Bird, Bert, Ernie, Grover, Oscar the Grouch, and cameo appearances from Chevy Chase and John Candy. It’s a film that revolves around Big Bird having to move from Sesame Street to live with a bird family by some adoption agency. Yet, Big Bird wants to stay in Sesame Street as it’s a mixture of road adventure film with the rest of the gang from Sesame Street go and get him back while a couple of smarmy circus organizers try to retrieve him for their own money-making act. 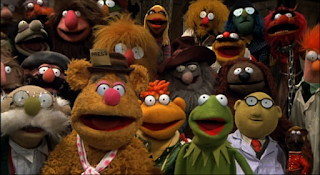 Another favorite of mine when I was a few years old as it’s a film I still love to watch as it revolves around the Muppets involved in a case of theft in London. It has Kermit the Frog and Fozzie Bear as twin brothers who are journalists working on an assignment with the Great Gonzo as they have to deal with the lecherous Charles Grodin trying to steal jewels and later pin it on Miss Piggy. It’s a fun film with great cameos from John Cleese, Peter Ustinov, Jack Warden, and Peter Falk.

If anyone who reads this blog and doesn’t think this is one of the finest films ever made….. FUCK YOU!!!!! This is a childhood staple about a group of kids trying to find a secret treasure somewhere in the Pacific Northwest to save their town from being bought out by some rich asshole and douchebag little shit of a son. Along the way, they have to deal with a family of thieves and all sorts of shit while being aided by a deformed man who is related to the thieves as it’s just a whole lot of fun. I’m still waiting for the sequel.

Thanks for reminding me to watch The Goonies. I don't know why but I keep putting it off.

ahhhhh...my friends little brothers ruined Goonies for me lol. I baby sat them with her one summer and they watched it every single day.

Great to see the inclusion of The Goonies. One of my favorites of the 80s. How can you not love that film when you were a kid?

As much as I think the Sesame Street gang does a great job of educating kids they came along just after I left childhood so I haven't seen Follow That Bird. I know my nieces and nephews loved it.

I finally saw The Goonies within the last couple of years and while I was as swept away by it as it seems everyone who saw it as a kid or teen is I did think it was a fun film.

But I did see The Great Muppet Caper when I was in my twenties and still loved it. The Muppets are terrific but it helped that an actress I love-Diana Rigg-was one of the main human stars. That aside it is an endearing film.

Since my childhood was longer ago than some my films are older as well but I loved them then and still do now.

Papa’s Delicate Condition (1963)-Based on silent film star Corinne Griffith’s memoir of her small town childhood with her brash, tippling father (Jackie Gleason) and aggrieved mother (Glynis Johns) who while frustrated with her feckless husband and the troubles he causes when he’s in his cups still loves him very much. Homey and sweet film introduced the song “Call Me Irresponsible” which won the Oscar.

Mary Poppins (1964)-Practically perfect in every way nanny appears on the doorstep of the staid but colorful Banks residence one day and nothing is ever the same again. Julie Andrews IS perfect as Miss Poppins, the songs are wonderful as is the rest of the cast including Dick Van Dyke (terrible Cockney accent and all), a delightfully addled Glynis Johns again and Oscar winner Jane Darwell in her last film appearance as the Bird Woman.

Angel in My Pocket (1969)-Minister Sam Whitehead (Andy Griffith) arrives at his new post in the small town of Wood Falls, Kansas with his wife Mary Elizabeth (Lee Meriwether), kids, mother-in-law Racine (Kay Medford) and trouble making brother-in-law Bubba (Jerry Van Dyke) hoping to lead his flock in a peaceful fashion. Instead he finds himself smack dab in the middle of a feud between the families of Mayor Will Sinclair (Henry Jones) and his rival Axel Gresham (Edgar Buchanan). While he tries to deal with that unbeknownst to all Bubba (Jerry Van Dyke) turns the church boiler into an alcohol still leading to another set of problems. As things come to a head and Sam fears he is losing his faith something happens that leads to a happy conclusion. Homespun and comfy movie with Griffith adding just the right blend of warmth and gravity to the lead.

I have never seen The Goonies...sorry:) The Sesame Street movie sounds sweet and I love The Muppets and this is a fun movie. I saw the first one when it came out and my dad's favourite show, later on, was The Muppet show-he loved Fozzie and the 2 old gents in the box. My lumberman dad who could give you a look that meant business loved that show

The Goonies is one of my favourite movie. So much adventure and fun to be had.

It's Jim Henson and The Goonies. What's not to love. Great work.

Goonies still holds up to this day Richard Donner does an amazing job with the cast and its memorable as hell. I know there are people who dont like this and I dont get it. Even if you didnt grow up in that era, it's still a good feature.

Funny you would have the 2nd Muppet movie on your list. For me My favorite is Muppets Take Manhattan followed by The Muppet Movie. I loved Great Caper and it certainly is a lot of fun. I just thought the cameos were better in The Muppet Movie is all

Great call on Muppets - that film is hilarious!! Only sawit for the first time a few years back. The bike sequence is amazing!

@Brittani-Maybe avoid it for a few years and then watch it again.

@Chris-I know. It's one of those films that make you feel like a kid when you re-watch it as it still holds up. I still think we need a sequel.

@joel65913-I do love Mary Poppins. She is awesome though I'm wary about the upcoming sequel as it's helmed by Rob Marshall whom I'm not fond of as a filmmaker.

@Birgit-Glad to know you love the Muppets and I love those 2 old guys. The original trolls who just keep making me laugh.

@vinnieh-What is there not to love about The Goonies?

@Wendell-Exactly. Why waste your time with today's bullshit entertainment for kids when you have the classics available to you.

@TheVern-I also love The Muppets Take Manhattan. Notably for those cameos. How can you not love those celebrity cameos? Just as long as they don't put in the Kartrashians, Lindsay Lohan, and Justin Beiber and I'm sure everything will be fine. And I'm with you on The Goonies which is why I had to say something to those people who hate on that film.

@Katie Hogan-I love that bike sequence as well as I wanna know how they did that. Plus, glad to know there's more love for The Goonies.

I love The Goonies.

While I am familiar with Sesame Street and The Muppets, I've not heard of those two particular ones.

@Wanderer-See those 2 films. They're so fun to watch.