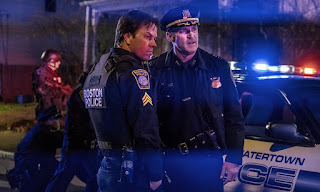 Based on the book Boston Strong by Casey Sherman and Dave Wedge, Patriots Day is the story about the 2013 bombing during the Boston Marathon and the subsequent manhunt to find the bombers. Directed by Peter Berg and screenplay by Berg, Matt Cook, and Josh Zetumer from a story by Berg, Cook, Eric Johnson, and Paul Tamasy, the film is a dramatic re-telling of the marathon bombing that killed three people and wounded several others as it would be followed by a manhunt on those that planned the bombing. Starring Mark Wahlberg, Kevin Bacon, J.K. Simmons, John Goodman, and Michelle Monaghan. Patriots Day is a riveting and intense film from Peter Berg.

On April 15, 2013, the annual Boston Marathon was held as it is a big event that brings people from around the world as well as the people from the city to run a marathon with locals cheering for those at the marathon. Yet, it was a dark day in the city when two bombs were exploded that killed three people and injuring hundreds more with some losing limbs and such. The film is about the 100-plus hours that occurred before the marathon and the manhunt for the two men that committed the acts of terror in the city with multiple storylines happening as it relates to those involved in these events. The film’s screenplay by Peter Berg, Matt Cook, and Josh Zetumer largely follows Sgt. Tommy Saunders (Mark Wahlberg) who is tasked with welcoming the racers at the finishing line to finish up his own suspension from the Boston Police Department.

Yet, he would be among those that would witness the bombing and go on the search to find the terrorists. The film does begin the day before the marathon as it relates to not just Sgt. Saunders trying to regain his trust with his superiors but also the lives of ordinary people who would be part of not just the marathon but also the manhunt including the two terrorists in Dzhokhar Tsarnaev (Alex Wolff) and his older brother Tamerlan (Themo Melikidze). The narrative would shift into the events of the day with a few subplots involving those who would have scary encounters with the Tsarnaev brothers though the script does a clunky job in introducing and establishing these small characters early in the film. Still, the script does play into the investigation led by Richard DesLauriers (Kevin Bacon) of the FBI in collaboration with Boston Police Commissioner Ed Davis (John Goodman) as it uses surveillance footage and such to find the identity of the terrorists as well as take part in the eventual manhunt that would occur in the nearby town of Watertown.

Berg’s direction is engaging for the way he captures a period in time told in the span of nearly five days as it begins with Sgt. Saunders on assignment where he would hurt one of his knees while getting a visit from Commissioner Davis during the assignment. Shot on various locations in and around Boston, Massachusetts with the main locations in the small towns of Quincy and the warehouse interior at Peabody. Berg does maintain a sense of momentum into what is happening such as the scene of the Tsarnaev brothers planting their homemade bombs and how a few characters would be at that location that includes a baby who was close to the bomb site but fortunately wasn’t killed. Berg’s usage of close-ups and medium shots doesn’t just play into the action but also in moments of the investigation and the manhunt that occurs in the film’s third act. There are usage of wide shots of the locations including a shot of the city just after it is being shut down so that the police and FBI try to find the Tsarnaev brothers.

For a film that is driven by suspense and action, Berg would also shoot scenes that are character driven such as a moment of Sgt. Saunders talking with a superior during the manhunt as he talks about what he encountered at the bombing and loss but also the realization of what needs to be done. Berg would also use these smaller moments that would include bits of humor as it relates to Watertown’s Sgt. Jeffrey Pugliese (J.K. Simmons) at a shoot-out against the Tsarnaev brothers as it relates to the cigar he always smoke. It does help play into what is at stake as well as the fact that FBI and local officers work together to make things right as it all plays into the climatic showdown between them and Dzhokhar Tsarnaev who would hide at an unusual place which is often expected from cowards like him. Overall, Berg creates a mesmerizing and gripping thriller about the 2013 Boston Marathon bombing and the manhunt for the two terrorists who committed the attacks.

Cinematographer Tobias A. Schliesser does excellent work with the film’s cinematography with the usage of natural lighting for the daytime scenes along with the usage of available and low-key lights for many of the interior/exterior scenes set at night. Editors Colby Parker Jr. and Gabriel Fleming do amazing work with the editing as its usage of jump-cuts help play into the action and drama as well as some of the film’s suspenseful moments. Production designer Tom Duffield, along with set decorator Ronald R. Reiss and art director Steve Cooper, do fantastic work with the look of the home that the Tsarnaev brothers live in as well as the warehouse interior that is used as the crime scene for Commissioner Davis and DesLauriers would use. Costume designer Virginia Johnson does terrific work with the costumes as it is largely casual along with the look of the police uniforms and the clothes that Tsarnaev brothers wore that would make them identifiable.

Special makeup effects artist Julie LeShane does brilliant work with the scenes just after the bombing in the way some of the characters look in their injured and harmed state to play into the horror of what happened. Special effects supervisor Matt Kutcher and visual effects supervisors Sean Devereaux do wonderful work with the film’s visual from the bombing scene to some set-dressing in a few set pieces in the film. Sound designers Dror Mohar and Piero Mura do superb work with the sound in the way the explosions sound from afar as well as the sounds of gunfire in the manhunt scenes as well as other sparse moments in the locations and action as it is one of the film’s highlights. The film’s music by Trent Reznor and Atticus Ross is incredible for its eerie approach to dark ambient with its usage of synthesizers and electronic instruments along with some percussions in the background to help play into the suspense and drama as it is a highlight of the film.

The casting by Sheila Jaffe and Angela Peri is marvelous as it feature some notable small roles from Boston Red Sox legend David Ortiz as himself recreating his moment days after the bombing, Khandi Alexander as a no-nonsense interrogator asking Tamerlan’s wife questions, Melissa Benoist as Tamerlan’s wife Katherine Russell who gets interrogated, Christopher O’Shea and Rachel Brosnahan as the couple in their respective roles as Patrick Downes and Jessica Kensky who both were severely injured from one of the bombs, Jimmy O. Yang as Dun Meng who was carjacked by the Tsarnaev brothers and later escaped where he told Sgt. Saunders what happened to him, Vincent Curtola as Boston’s Mayor Thomas Menino, Michael Beach as Massachusetts Governor Deval Patrick, Jake Picking as MIT Officer Sean Collier who had an unfortunate encounter with the Tsarnaev brothers, Lana Candor as a MIT student Collier wanted to go out with, and James Colby as Boston Police Superintendent William Evans who aids in the manhunt as well as the investigation.

Alex Wolff and Themo Melikidze are superb in their respective roles as Dzhokhar and Tamerlan Tsarnaev as the two men who planted the bombs during the marathon with Wolff being reluctant at first only to get the thrill of killing and Melikidze as the more aggressive of the two. Michelle Monaghan is fantastic as Carol Saunders as Sgt. Saunders’ wife who is also a registered nurse as she was at the marathon but unharmed as she tries to help her husband get healed up physically and emotionally. J.K. Simmons is excellent as Sgt. Jeffrey Pugliese as an officer from Watertown who would be part of the shoot-out against the Tsarnaev brothers as he is a man of great skill that would help lead his fellow officers to battle as it’s a low-key yet badass performance from Simmons.

Kevin Bacon is brilliant as Special FBI Agent Richard DesLauriers as the man in charge of the investigation of the bombings as he turns to Commissioner Davis and Sgt. Saunders for help on the location of streets as well as making decisions of what information should go public. John Goodman is amazing as Boston Police Commissioner Ed Davis as the head of police who is trying to maintain morale as well as getting everyone including his officers to see what they can find as it’s a low-key but memorable performance from Goodman. Finally, there’s Mark Wahlberg in a remarkable performance as Sgt. Tommy Saunders as a suspended police officer trying to back on the force as he deals with being near one of the bomb sites as he tries to help those in need as well as take part in the manhunt to find the Tsarnaev brothers as it’s a reserved and intense performance from Wahlberg as someone who is trying do what is right as well as ensure that he can make his home safer again.

Patriots Day is a marvelous film from Peter Berg. Featuring a great cast, an engaging script, rapturous visuals, and a haunting score from Trent Reznor and Atticus Ross. It’s a film that play into a real-life event and showcase what some people are willing to do to bring justice back to a city that was rocked by terrorism. In the end, Patriots Day is a remarkable film from Peter Berg.

I'm so glad you reviewed this movie. I don't know what the hell happened to this film, I thought it was so well done, but it got such a shitty release, marketing and distribution wise. I LOVED Reznor and Ross's score.

@Alex-It was a better film than I thought it would be as I've been mixed on Peter Berg as a filmmaker yet he really did an incredible job in this and I think it should've gotten a better release. Yes, that score by Trent and Atticus is awesome as I hope to do a full review of that sometime next month.