For the 31st week of 2018 as part of Wandering Through the Shelves' Thursday Movie Picks series hosted by Wanderer. We focus on the idea of people switching bodies whether it’s through some kind of strange surgery or something magical as it’s often fodder for comedy or something even more fucked up. Here are my three picks: A film that is now about to unleash a third remake for the Disney Channel is about to arrive yet it is clear that the upcoming film as well as the very popular 2003 film and a 1995 TV film version don’t compare to the 1976 original. Starring Jodie Foster and Barbara Harris is this offbeat comedy where a teenage girl and her mother say the exact words “I wish I could switch places with her for just one day” suddenly causes problems. What happens is this strange yet exhilarating comedy that is full of charm as well as provide both Foster and Harris the chance to do so much as well as play into the fears of being an adult and teenager. 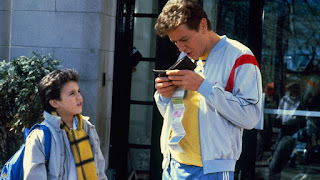 What happens when a workaholic yuppie dad touches a magical skull with his son and they suddenly switch bodies? That is pretty much the premise of the film that stars Judge Reinhold and Fred Savage as it is part of a wave of body-switching comedies that was around in the 1980s yet this is the best of the bunch. Notably as Savage plays it straight when he acts like the adult while Reinhold gets to really loosen up as there are also some very funny moments about how much of a dick Reinhold’s character is when played by Savage. The scene where the secretary of Reinhold’s character gets a call from Savage and tells a co-worker, “the little shit sounds like his father”. 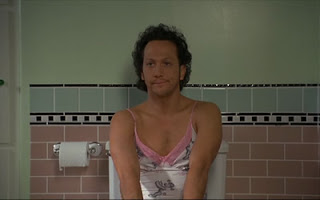 Among the slew of films from the late 90s and early 2000s that starred Rob Schneider that essentially becomes the idea of the derp-de-derp films that often puts an actor into some kind of stupid situation and does the same shit like he did in his other films which is essentially what Johnny Depp, Adam Sandler, and Tom Cruise have been doing lately with most of their films as of late. This one revolves around Schneider stealing a mysterious earring from Rachel McAdams where they both put on an earring and they switch bodies. It’s one of the better films that Schneider is in as he definitely camps it up in every way while McAdams is actually very funny in the way she acts like a dude and such. It’s silly and low-brow but it brings in the laughs.

That’s an easy one to answer for me: Tom Hanks in Big (1988). I haven’t heard of Vice Versa before which sounds similar in its approach but with its own charm.

I thought The Hot Chick was rather meh but I LOVE this version of Freaky Friday and agree its the best of the various tries at the material, though the JLC/Lohan one has its pluses. Both Jodie Foster & Barbara Harris (a terribly under-appreciated performer) do wonders with the material.

We match on Vice Versa!! There was a whole little cottage industry for while in the 80's of this type of film for some reason but again I agree this one was the best. One of my favorite scenes was after they had switched and Fred in Judge's body goes to see his teacher and she mentions she thinks Fred has a little crush on her and Judge blurts out "NO WAY!!" His expression and body language when he says it is just perfect.

There's so many of these films I decided to reach back a bit for my other two beside Vice Versa.

Turnabout (1940)-Well-to-do Tim Willows (John Hubbard) is the main operator of his advertising company Manning, Willows, and Claire. His wife Sally (Carole Landis) stays at home and oversees their social life. When together they bicker constantly that the other has it much easier than they do. One day in the heat of an argument they wish they could switch places with each other in the presence of Mr. Ram, an Indian idol they have received as a gift. When they wake up the next morning they have indeed switched places and bodies with each other. Chaos ensues. Sprightly comedy with good performances and a twist ending.

Goodbye Charlie (1964)-Hollywood screenwriter and womanizing reprobate Charlie Sorrel is shot by film producer Sir Leopold Sartori (Walter Matthau) when he catches him with his wife on Sartori’s yacht and falls into the drink. Shortly afterwards Bruce Minton III (Pat Boone) comes to the aid of a dazed woman (Debbie Reynolds-at the height of her blonde beauty) wandering on a beach. She doesn't remember much other than directions to Charlie's residence. The next morning, it all comes back to her: she is Charlie…but in female form. Needing help she convinces her only friend, George Tracy (Tony Curtis), of her identity. Having changed sex, but not his ways the new Charlie now going by Virginia decides to take advantage of the situation, with Tracy's reluctant help. Directed by Vincente Minnelli with a super cast including a young Ellen Burstyn when she was still billed as Ellen McRae. Remade in the 90’s as Switch with Ellen Barkin and Jimmy Smits.

Vice Versa (1988)-While on a buying trip in Thailand for his department store Marshall Seymour (Judge Reinhold) has a cursed Buddhist skull slipped into his shipment by a pair of thieves (Swoosie Kurtz & David Proval). When he returns to the States he finds that he has to take care of his estranged son Charlie (Fred Savage) when his divorced wife goes away for a few days. One morning in the middle of an argument Marshall finds the skull and while both he and Charlie are holding it they wish they had the other’s life and voilà they get there wish. As both first luxuriate and then begin to understand the frustrations the other puts up with the thieves are in hot pursuit trying to get the artifact back. Frantic farce makes good use of Reinhold’s gift for physical comedy.

I also went with Freaky Friday but I picked the remake with Lindsay Lohan and Jamie Lee Curtis as I haven't seen the original. I've been meaning to watch it though. I'm pretty sure it's better than the one I saw.

Vise Versa is the only one I haven't seen here. I do prefer the remake of Freaky Friday which I'm sure sounds very lame. lol

It’s been years since I last saw Freaky Friday.

I haven’t seen any of these but I want to see Freaky Friday with Jodie Foster and the remake with Jamie Lee Curtis. Hot Chicks might be one I will see since Rob Scheider is one I usually avoid. The one with Judge Reinhold I would love to see.

@Chris-Actually, Big is more of a magical movie than a body switch film.

@joel65913-That scene in Vice Versa was hilarious. I love that film, it's one of those movies I grew up on. I wanted to avoid the 2003 remake of Freaky Friday as I thought it was too easy and wanted to put more attention on the original which I think gets overlooked as time goes on.

@Sonia-The original film is more of a product of its time but it is entertaining as hell.

@Brittani-Just watch the original Freaky Friday as it is fun and I totally recommend Vice Versa.

@Birgit-Vice Versa for me is the best body-switch film of the 1980s. I'm not of Rob Schneider either but The Hot Chick is still funny. Especially in seeing Rachel McAdams act like a dude.

Have to admit, I've not seen any of these, body swaps are sometimes too much, or it may be that I really don't like Rob Schneider.

@Katie-I don't like Rob Schneider either though this is one of his better films. Yet, he should keep his fucking mouth shut when it comes to politics and health issues.