Against the Crowd Blog-a-Thon 2018 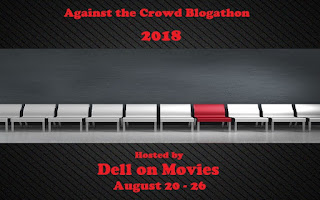 5. Let us know what two movies you intend on writing about in one of the following ways: Comment on this or any ACB 2018 post on this site Tweet me @w_ott3 E-mail me: dellott@yahoo.com

A new rule is added as it relates to films that doesn’t have a Rotten Tomatoes score where a film that has a score from the IMDB higher than 7.5 and lower than 4.0 can be selected. Here is what I’m picking: 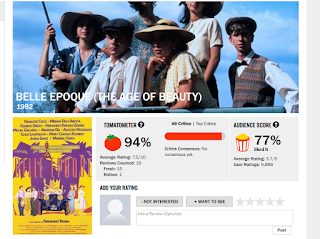 Anyone who has read my blog know that a lot of the films I review are foreign films as I’m often known for giving foreign films positive reviews. If one was to ask me my opinion on Fernando Trueba’s 1992 film Belle Epoque that introduced Penelope Cruz to international audiences. My response would be that the movie sucked. Why would I dislike a period romantic film from Spain that didn’t just feature Cruz in one of her early roles but also future international stars like Ariadna Gil and Maribel Verdu? Well… It’s one of those films that I saw in my mid-teens as like any other kid. I stay up watching films late at night just to see boobs. The film did have Gil topless but I was disappointed by the lack of nudity from Cruz who was becoming a big star. Years later as I had acquired a grasp of what cinema is, I re-watched it just to see if it was any good as I wasn’t impressed by it the first time.

In that re-watch, I found the whole film to be very boring and too safe for my tastes. It’s really the kind of film that is more of an awards-bait kind of film set in the early 1930s just before the emergence of the Spanish Civil War where a young soldier hides at the home of an old man in the country and falls for his four daughters where he would eventually aim for the youngest played by Cruz. It’s got all of the things expected in an awards-bait kind of film and despite the performances of Cruz, Gil, and Verdu. I don’t remember anything else as I was more appalled by the fact that this was the film that won not just a bunch of Goyas (Spain’s equivalent to the Oscars) over a much better film in Jamon Jamon by Bigas Luna that also starred Cruz and her future husband Javier Bardem. This was the film that won the Academy Award for Best Foreign Language Film over Chen Kaige’s Farewell My Concubine and Ang Lee’s The Wedding Banquet. Ugh… 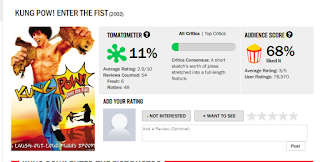 For every film that takes itself way too seriously, there has to be a counterbalance and what better counterbalance for that in one of the most ridiculous films of the 2000s. Written, directed, and starring Steve Oedenkerk comes a kung fu spoof film where Oedenkerk puts himself in the 1976 kung fu film Tiger and Crane Fist where it is about a guy who is the Chosen One as he is trying to stop an evil madman who has re-named himself Betty. It’s silly as it involves a CGI cow trying to stop the Chosen One, gopher-chucks, a tongue with a face, a mysterious evil council, and a master who likes to listen to pop and hip-hop as he thinks ‘Nsync is the bomb (they are). Oedenkerk a few years ago announced a sequel though nothing hasn’t emerged as I’m sure myself and many fans of the film are still waiting.

I haven't even heard of Belle Epoque so I can't really comment on it other than to say it sounds terrible. Kung Pow is one I avoided because I heard it was bad. Might have to check it out. Thanks for participating!

I unabashedly and unironically love Kung Pow. It is one of the most frequently quoted movies in my house.

That's a lot of nuts!

I've never seen Belle Epoque so I can't comment on that, but I did see Kung Pow when I was a kid and I remember thinking it was funny. I'd have to watch that again to reform my opinion completely.

These are such great picks to see from you, I love it!

I haven't seen either of these but have been meaning to watch Belle Epoque because of the cast and the fact that it won over The Wedding Banquet which I absolutely adore.

The other sounds goofy enough to give a shot even though I'm not much of a fan of chop suey movies.

I haven’t seen either of these but wanted to see Belle Époque for a while now. I haven’t even heard of the last one but it remind me of the Woody Allen film, “What’s Up Tiger Lily.” Since he took a bad Japanese film and redubbed it with a very witty dumb ass script. Anyway, it’s usually fun to see one of these films especially with all the Kung-fu fighting...que the song

@Wendell-Kung Pow is one of these films where if you just turn off your brain and embrace the silliness of it. You'll enjoy the hell out of it.

@SJ Honeywell-And in that moment, the Chosen One learned a valuable lesson about iron claws. THEY HURT LIKE CRAP MAN!!!

@Brittani-Kung Pow is just stupid fun. I'll take stupid fun over films that demand so much.

@joel65913-It's not high-art cinema but it's a film where I'll watch it just because it's so stupid but so fun to watch.

@Birgit-It is kind of like that Woody Allen film except Steve Oedenkerk puts himself in the film and brings in a different narrative. Plus, the kung fu fighting is hilarious.

I've never heard of Belle Époque and now I'm not even interested in seeing it.

@Sonia-It's one of those movies that has everything you would expect in an awards-bait period film where it tries to be a lot of things but you end up being very bored by it. Plus, some of the people who are in that film have done better films.

Sorry to be another person to say that I haven't seen either of these, but I'd be interested to watch them and see where I fall in the love or hate crowds.

@Katy-That's OK. There's a lot of films we haven't seen. I've seen nearly 10k films in my lifetime but there's still so many that I haven't seen. Yeah, there's those films that are considered great that turned out to be total shit while there are those that weren't well-received that are actually better than people realize. This is why I love doing this blog-a-thon as I'm going to take part again for next year's event. It's fun.