For the 33rd week of 2018 as part of Wandering Through the Shelves' Thursday Movie Picks series hosted by Wanderer. The subject is on non-English language films as there’s just so much to cover as it could basically be anything. Especially as I am someone that often reviews and watch foreign films. Here are my three picks as they’re not anything definitive but rather three picks of films from three different continents that I feel people should seek out as they’re available on Filmstruck: 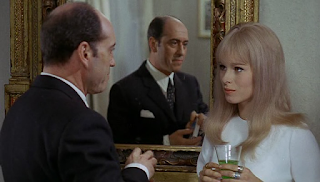 From Carlos Saura is this film about identity and longing as it play into a man whose best friend has a new wife that looks similar to a woman he had seen play drums at a parade some time ago. It’s a strange film that stars Geraldine Chaplin in a trio of roles as that girl playing drums, the mysterious blonde who looks like that woman, and the man’s assistant. Yet, it does showcase what Saura could do with ideas of surrealism and memory.

2. The Life of Oharu 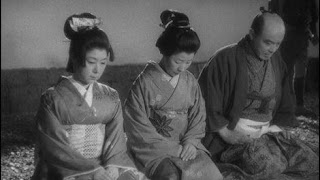 The very first film of Kenji Mizoguchi that I had seen is this film about the life of a woman who was sold into prostitution by her father to pay off his debts as she endures the many cruelties that happen to women during the Edo era of 17th Century Japan. It is a devastating film to watch yet Kinuyo Tanaka’s performance is entrancing in the way she endures so much as she also tries to find some idea of hope in an unjust system that did more harm to women than help them. 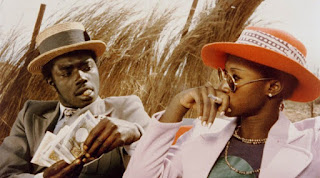 From Dijbril Diop Mambety comes a landmark film from Senegal just nearly a decade of the release of Black Girl that introduced the world to African cinema. The film revolves around two lovers who want to leave the country to go to Paris as it has this element of surrealism as well as a clash of tradition vs. modernism. It doesn’t have much of a plot yet it manages to convey this idea of a world that is trying to find its identity with two people wanting to go somewhere else but hold on to their roots.

I've only seen Peppermint Frappe of these three. I thought Geraldine Chaplin was very good but I didn't like the film much outside of her.

I was very broad based this week as far as what was included so I narrowed down by sticking to all French films.

A Man Escaped (1956)-Director Robert Bresson tells the tale of Fontaine (François Leterrier), a member of the French Resistance, who is being held by the Nazis at Fort Montluc. Notified that he is scheduled for execution he begins to devise a plan to break out. Things are coming together slowly when he is assigned a new roommate. At first wary but needing to proceed Fontaine grudgingly brings the newcomer into the escape effort relying on crudely made weapons and an intricate knowledge of the prison’s layout to try for his freedom. Tense and involving this is based on fact.

Elevator to the Gallows (1958)-Duplicitous Florence (an extraordinary Jeanne Moreau) married to the wealthy arms dealer Simon Carala (Jean Wall) is carrying on an illicit affair with one of his employees, Julien (an equally fine Maurice Ronet). They make a pact to dispose of Simon so late one night Julien climbs a rope into Simon's office, kills him and leaves unnoticed. Anxious to get away from the site Julien accidentally leaves the rope at the crime scene. After retrieving it he becomes stuck in the building's elevator while Florence desperately waits below. Frantic he soon finds that his bad luck is just beginning. Compelling, nerve jangling noir filmed with enormous style by Louis Malle.

Police Python 357 (1976)-One night while pursuing a crook loner police inspector Marc Ferrot (Yves Montand) meets and is immediately smitten with the alluring Sylvia (Stefania Sandrelli) and they begin an affair. Unknown to Ferrot Sylvia is the mistress of his direct superior Commissaire Ganay (François Périer) who when he discovers the liaison murders Sylvia in a fit of jealousy. Panicked Ganay confesses his crime to his paralyzed wife Thérèse (Simone Signoret) who offers him advice on how to shift the evidence away from himself. Once the death is discovered Ferrot is assigned to investigate and as he wades through the case finds that all evidence points to him. Now he must race the clock to reveal the true culprit. A reworking of the 1948 Charles Laughton/Ray Milland film The Big Clock and rethought again in 1987 as the Kevin Costner/Gene Hackman No Way Out.

ImI kicking myself because you recommended Touki Bouki to me before and I still haven't seen it. Ugh!

I haven't seen any of these but they all sound like interesting movies. I'll check them out.

Touki Bouki sounds like something I'd enjoy but it's not on Netflix :( , I haven't seen any of your picks this week.

@joel65913-Two of these films I have seen as I'm a fan of both Bresson and Malle while I haven't seen the last film you mentioned.

@Wendell-I stated in my post that all 3 of these films are available on Filmstruck as I suggest to check it out there.

@Sonia-I hope you do as I'm just trying to spread the word for films that aren't seen by a wide audience.

@Brittani-As a I mentioned in my post, they're available on Filmstruck. I doubt Netflix would carry these films as they're more concerned with putting Adam Sandler bullshit films than the films I mentioned.