For the 34th week of 2018 as part of Wandering Through the Shelves' Thursday Movie Picks series hosted by Wanderer. The subject is on discovery and exploration as it play into the idea of man wanting to discover something that hasn’t been found nor a film that could be more about a discovery from within. Here are my three picks:

One of the first achievements in cinema by Georges Melies comes a groundbreaking story where a group of astronomers wanting to go to the moon. It’s a film that showed ideas of what film could be in not just the art of storytelling but also its possibilities as it is a sci-fi film of sorts. Yet, it’s really an exploration of men wanting to go to the moon and see what is there.

2. The Life Aquatic with Steve Zissou

From Wes Anderson is an absurd film of discovery and exploration set in the seas yet it’s really more about a troubled oceanographer who decides to go on an expedition to find a rare shark and kill it out of revenge for eating one of his best friends. While it is often considered Anderson’s weakest film by some, it is still a fun and adventurous film thanks in part to an ensemble cast that includes a scene-stealing performance from Willem Dafoe as Klaus who always brings in the laughs. 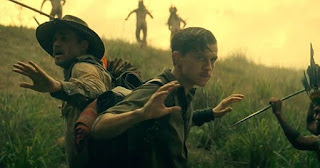 A recent film that needs to be seen more is an adaptation of David Grann’s book about Percy Fawcett’s expeditions in the Amazon and his search for a supposed lost city. Directed by James Gray, the film is truly unlike many bio-pics as there’s a lot of physicality that goes on in the exploration of this lost city and Fawcett’s determination to show proof that there is a lost civilization. The performances of Charlie Hunnam, Robert Pattinson, Sienna Miller, and Tom Holland are incredible as is Darius Khondji’s cinematography in a film that is rich yet eerie.

Considering its age A Trip to the Moon is an amazing achievement. I thought Life Aquatic was okay though that's usually my opinion on all PTA films. Great cast though. This is the second time today I've seen Lost City of Z mentioned and it does sound with checking out. I've put it in my queue and am looking forward to it.

All mine are based on true stories and deal with the elements in one way or another.

The Right Stuff (1983)-Epic film of the origins, formation and realization of America’s space program with a stacked cast, Ed Harris, Sam Shepard, Barbara Hershey, Dennis Quaid, Fred Ward, Kim Stanley, Veronica Cartwright and on and on, of award level performances and a real sense of wonder and discovery. The best film of 1983 it was robbed at the Oscars where the prize went to the solid but not nearly as extraordinary Terms of Endearment.

Never Cry Wolf (1983)-Canadian biologist Tyler (Charles Martin Smith) travels on government orders to the isolated arctic wilderness to discover if the area's caribou population is declining due to wolf-pack attacks. After a harrowing flight in a bush plane piloted by "Rosie" Little (Brian Dennehy) Tyler is left in the middle of a sub-zero frozen lake until he is rescued by traveling Inuit Ootek (Zachary Ittimangnaq), who builds a shelter for him and departs. On his own he encounters a wolf family and discovers they seem as curious of him as he is of them. Establishing an observation post he learns much including ultimately that the greatest danger to the caribou is man himself. Vivid Disney film lead to the formation of the Touchstone division of Disney when there was an outcry that this was far removed from their standard family fare.

The Endless Summer (1966)-In search of the surfer's Holy Grail "The Perfect Wave" documentarian and competition-level surfer Bruce Brown embarks on an around-the-world adventure of discovery with surfers Michael Hynson and Robert August. In their quest the three visit Hawaii, Australia, South Africa and other secluded surfing spots seeking their sweet spot while Brown’s narration and an instrumental guitar-driven soundtrack by The Sandals plays over the silent footage.

OH how I adore A Trip to the Moon! Never gets old, that one!

We match on Lost City of Z and I'm so happy to see someone else pick it. The cinematography in it really is great. I like The Life Aquatic, too, even though I can acknowledge it's not one of Anderson's best.

Whenever I meet someone named Cody, I always think "Be still, Cody" from Life Aquatic. That's the only one of your picks I've seen, it's my husband's favorite Wes Anderson movie.

How can one go wrong with George Méliès..I am a huge fan and almost picked this film so I’m glad you did. I love Wes Anderson films so I need to see this one and the last film is the second time I am reading about it. It sounds like a film I need to see.

@joel65913-First off, you're mixing up your Andersons as Life Aquatic is directed by Wes Anderson, not Paul Thomas Anderson. The Right Stuff is a monumental achievement in film and certain incredible.

@Daniel-I agree that Life Aquatic is among one of Anderson's weakest films though I still enjoyed it.

@Birgit-I totally recommend seeing The Lost City of Z as it does play into the idea of obsession but also the idea of searching for the unknown.