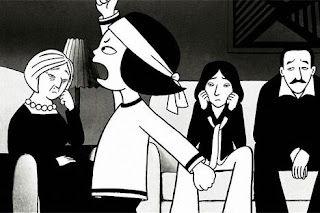 While animated films in recent years, have largely been made in 3-D computer-animated formats. The idea that 2-D hand-drawn animation ceasing to exist seems ludicrous as new animators often acknowledge the talents of the hand-drawn animators of the past. In 2007, the film that garnered all of the attention in both critical acclaim and box office success is Ratatouille led by Pixar studios and the film's director Brad Bird. While the film seemed to be the most acclaimed animated film that year, it would be another film from another country and style that would managed to garner as much attention. Based on a graphic novel about a young woman's life living in Iran as a child during the days of Ayatollah Khomeini while growing up to explore Europe and return to Iran in the post-Khomeini era. It would be a film that took the graphic novel to an animated form for an unusual but powerful film simply entitled Persepolis.

Based on the graphic novel of the same name by Marjane Satrapi, Persepolis tells the story of Satrapi's life as a child living in Iran as she comes of age during the Iranian Revolution in the late 70s and early 80s while exploring Europe and returning to Iran. Directed and adapted by Satrapi with animated director Vincent Paronnaud. The film is a 2-D animated film that takes images from Satrapi's graphic novel as it's told mostly in black and white but in color for scenes in the present. Featuring the voices of Chiara Mastroianni, Catherine Deneuve, Danielle Darrieux, and Simon Abkarian. Persepolis is a touching yet mesmerizing masterpiece from Marjane Satrapi and Vincent Paronnaud.

Marjane Satrapi (Chiara Mastroianni) is at a Parisian airport recalling her memories about her life in Iran as she's set to return to the country. It's 1978 when she was 9-years old kid named Marji thinking she will become a prophet as she lives with her parents (Catherine Deneuve & Simon Abkarian) and her grandmother (Danielle Darrieux). After hearing her father tell the story about the Shah's emergence from his father at a time as he's to fall, Marji and friends try to attack the son of a government official. Instead, God tells her that it's not the boys fault as she watches the Shah get overthrown and the return of Uncle Anoush. For a moment, it seems things are going to be better until the return of Ayathollah Khomeini who brings more restrictions to the country.

With her uncle sent back to prison as she visits him before his execution, Marji's view of the world becomes more dramatic. Following the start of the Iran-Iraq war and the increased restriction of Islamic law, Marji rebels through Western culture as she listens to Iron Maiden, wearing jacket that says "punk is not dead" on her back, and having a Michael Jackson badge on the jacket. Her rebellion leads her to be sent to school in Vienna. Shocked by her new surroundings and discovering new things including hardcore punk, her period in Vienna was a life-changing experience as she lost her virginity to a gay man and having a boyfriend named Markus for a while.

Following her return to Iran after the depressing experience in Vienna, she isolates herself for a while only to go to a university studying art where she meets her first husband Reza in 1992. Yet, her marriage at 21 proved to be a miserable experience as Majane turns to her grandmother for guidance prompting her to make decisions about her life.

The film is essentially a coming of age story about a young girl coming of age in a turbulent era in world history while learning about new worlds and then going back to her old country where things changed and some things haven't. Since it's an autobiographical tale based on a graphic novel, Marjane Satrapi and co-writer/co-director Vincent Paronnaud. The film does bring the graphic novel to life but instead of making it into live action. It's all animated where nearly the entire film is done in black-and-white, hand-drawn 2D animation similar to the look of the novel itself. What makes this film so interesting in its storytelling and direction is that it's told from memory as the only scenes in color are a present day Marjane at a Paris airport recalling all of this. She goes into great detail about the things in her life like how her grandmother puts jasmine flowers on her bra to make her smell fresh.

The direction of the film is truly mesmerizing in its images where it ranges from comical to dramatic. With some scenes of violence or of suspense, it's often done in a grey background with black shadows to help play up to the film's dark tone. Satrapi and Paronnaud with a team of animators and production designer Marisa Musy do fantastic work in recreating the look of Tehran and other places to explore the worlds that Marjane goes to. The scenes where its dreamlike, notably the dream conversations Marji would have with God has a wonderful look that gives an idea of heaven. The overall work in the animation is truly electrifying but also powerful in what it does for the art form itself.

Editor Stephane Roche does a brilliant job in the use of dissolves, jump-cuts, and fade-to-black shots in order to keep things moving for the film. At a running time of 95 minutes, it moves with such ease as some of the editing plays up to either the dream-like state of the film or its suspenseful, dramatic moment. Sound editor Samy Bardet does amazing work in the sounds of sirens, bombs, gunshots, and everything else to explore the chaos of Iran in the 1980s as well the raucous world of Viennese punk rock. The music of Olivier Bernet is fantastic with its mix of somber, orchestral pieces as well as comical arrangements along with the use of Middle Eastern sounds to play up to the world of Iran and its despair. The soundtrack includes Chiara Mastroianni singing Survivor's Eye Of The Tiger in a comical sequence.

The casting is great with many voice talents playing several characters with a couple of voice actors standing out in Francois Jerosme as Uncle Anoush and Gabrielle Lopes Benites as the young Marji. Danielle Darrieux is phenomenal as the voice of the wise, no-holds-barred grandmother who always gives Marjane worldly advice about the world and men. Simon Abkarian is great as the voice of the father who reveals Marjane stories about politics and how things weren't different when the Shah was in control as well as the way things were in the post-Khomeini world. Catherine Deneuve is superb as the voice of Marjane's mother (who in real-life is Chiara Mastroianni's mother), who wants Marjane to be independent while dealing with the cruelty men has towards women. Finally, there's Chiara Mastroianni doing spectacular voice work as Marjane, the protagonist who has this life-changing journey as Mastroianni voices the struggles, hardships, joys, and dissolution of a young woman dealing with all of those things in life.

When it premiered in competition at the 2007 Cannes Film Festival, it was a surprise hit as it tied for the third place Jury Prize with Carlos Reygada's Silent Light. Yet, the film would continue to garner rave reviews and modest box office success internationally as it would be nominated for Best Animated Film at the Academy Awards. Though it didn't win, it still proved that there is still life in 2D hand-drawn animation as it was still considered to be one of the best films of 2007.

Persepolis is an entrancing yet heartfelt masterpiece from Marjane Satrapi and Vincent Paronnaud. Those who loved the graphic novel will be amazed in what Satrapi and Paronnaud did to the images as it comes to life in such a grand yet elegant fashion. For those who love animated films, this is truly one of the decade's best as it proves that it can be as moving and striking as the current wave of 3D computer-animated films in the U.S. In the end, for a film filled with various themes on life and universal messages that are still relevant today. Persepolis is the film to go see.