In the 40th week of 2020 for Wandering Through the Shelves' Thursday Movie Picks. It’s October as it is Halloween season as we go into the subject of horror movie houses. Places that no one should go to where a whole lot of fucked up shit goes on. Here are my three picks: 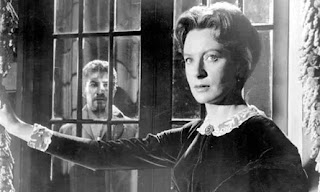 Jack Clayton’s adaptation of Henry James’ The Turn of the Screw revolves around a governess who is watching over two children who believe they are possessed by ghosts in this home. It’s a straightforward premise for a haunted house film yet it is more about the atmosphere and a lot of the chaos that occur within the house as it relates to its previous inhabitants. Shot in gorgeous black-and-white photography by Freddie Francis, Clayton maintains something that is gorgeous yet eerie while the film includes an incredible leading performance Deborah Kerr as it is a film that horror fans need to see.

From Japanese filmmaker Nobuhiko Obayashi is probably one of the most insane horror house films ever made. It’s a film that revolves around these seven schoolgirls going to the country at the home of one of the girls’ aunt where it is rumored to be haunted and well, that is an understatement. It’s just that everything goes exactly insane where it is darkly comical as it relates to the girls trying to fight the house while dealing with a mysterious white cat. Featuring a fun music soundtrack and visual effects that are bonkers, it is one of the best haunted house films ever.

If there’s a film in the 2010s that should be in the conversation more often, it is Guillermo del Toro’s 2015 Gothic horror drama as the titular home itself is one of the best horror homes ever. Set in the late 19th Century/early 20th Century, the film revolves around an American writer who meets a British man as they fall in love yet is warned by ghosts to not go to this house. She marries the man and goes to this house that is in ruins as it is the man’s home that he shares with his sister as it has a dark history and previous inhabitants that play into the suspense. It is a film that gets much richer through re-watches while it remains baffling into why Jessica Chastain got overlooked for her performance in the film as she’s just wild and insane.

I've only seen the first, and what a glorious picture it is! How Deborah Kerr missed out on an Oscar nomination is beyond me. A masterwork of setting and tone.

I've heard of the others but I'm not much for horror.

Not being much for horror made it a bit tricky but I managed to come up with three, one of which is not strictly horror but still fits.

The Haunting (1963)-Dr. John Markway (Richard Johnson) is doing research into psychic phenomena. In the service of that study he invites two women-lonely, eccentric Eleanor (Julie Harris) who has experienced supernatural events previously and brash Theodora (Claire Bloom) who is gifted with ESP. On arrival they are joined by the mansion's heir, cynical Luke (Russ Tamblyn) and are immediately overwhelmed by strange sounds and events. Soon Eleanor comes to believe the house is alive and speaking directly to her. Loaded with atmosphere and extremely well-acted.

You’ll Find Out (1940)-Debutante Janis Bellacrest (Helen Parrish) books Kay Kyser and his big band, the Kollege of Musical Knowledge including singer Ginny Simms and cornet playing sidekick Ish Kabibble to play at her 21st birthday party at a remote spooky mansion. Between performances, Kay finds Janis’s guests-quirky Aunt Margo (Alma Kruger), pretentious professor Fenniger (Peter Lorre), creepy Prince Soliano (Bela Lugosi) and irritable Judge Mainwaring (Boris Karloff) on the bizarre side and begins to suspect that Janis is in danger. When a powerful storm blows in and strands everyone overnight events both scary and wacky transpire. Goofy musical comic/thriller is the only onscreen pairing of Lorre, Karloff and Lugosi.

Seven Footprints of Satan (1929)-When mayhem breaks out at her father’s party Eve (Thelma Todd) and her fiancée Jim (Creighton Hale) jump into a limousine and think they are safely away from danger. Shortly afterwards though they find themselves at the house of “Satan” who may or may not be a criminal mastermind, a supernatural fiend, the devil himself, or some combination of all those things. As they make their way through odd rooms they encounter an imp, a dwarf, an ape-like man, a gorilla, Satan’s Mistress and “the Spider”. Finally they are tested with the Seven Footprints which could lead to fabulous wealth and freedom or servitude to Satan…and maybe Death! Originally released in both silent and partial sound versions only the silent one (long thought lost as well) survives.

Okay, House has my attention. That sounds so strange. Crimson Peak was a beautiful film completely robbed of a production design Oscar nomination.

I've seen all three of these, and they're all great picks. Crimson Peak, is desperately underloved--and that house is goddamned amazing. I'm still in shock that it wasn't nominated for set design at the Oscars that year.

The Innocents is one of those movies that still manages to work and be scary despite being nearly 60 years old. It's one of those rare films (like The Haunting) that works entirely on the atmosphere being created rather than cheap jump scares and gore.

But Hausu--now that's a fascinating pick. It's a completely bonkers movie, of course, but here's the thing--when you learn that director Nobuhiko Obayashi was born in 1938 in Hiroshima, it makes a lot more sense. There's no way to see that film as anything but a reaction to living through that at such a young age, which means it's so much more than just batshit crazy.

I really wanted to love Crimson Peak, and while it certainly looks stunning, the story fell short for me.

We match with The Innocents which really scared the hell out of me. I read the book as well and it’s just a scary and sexy since there is some lustful stuff going on. I haven’t seen House and not sure I will but I did see Crimson Peak with Chastain just plain nuts. It was an ok film that was better more at the beginning than the end.

@Brittani-Go see Hausu. It's really fucked up but goddamn, it is insane in a good way.

@SJHoneywell-Glad to know there's someone here that also shares my love for Crimson Peak as I was blown away by it as I would love for Guillermo del Toro to do more films like that.

@ThePunkTheory-I will disagree with you respectfully as I can understand why it didn't work for some.