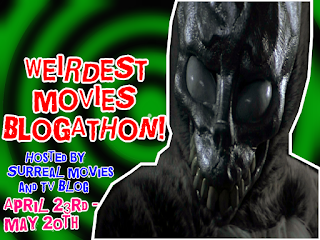 Ronyell at The Surreal Movies and TV Blog has created a blog-a-thon devoted entirely to the weirdest movies ever seen. Here are the rules:

1) List up to 5 or 10 of the weirdest movies that you have ever seen. If you want to list over 10 movies or below 5 movies, then you are free to do so.

2) You don't necessarily have to list your favorite movies or movies you even like. Just movies that you think are weird.

3) Use the banner at the top of this page in put into your post.

4) This blog-a-thon runs from April 23rd - May 20th, so you need to send your submissions in by May 20th. After that, I will make a special post where I will list all the bloggers who had participated in this blog-a-thon!

Well, for anyone that has read this blog know that I watch a lot of weird shit and I praise a lot of weird-ass shit. So here’s 10 films that really fucked me up big time:

I think when it comes to weird movies, no one does it better than the master surrealist Luis Bunuel as he is the definition of weird. In this collaboration with another legend of surrealism in Salvador Dali comes a film that defies description. The 16-minute short film is something that can’t be unseen once it is seen as it has no plot as it’s more about images. Still, what Bunuel and Dali do create are moments that would inspire many filmmakers in the years to come as well as the idea of “what the fuck” moments that still remains vital and dangerous.

There’s just some films in the history of cinema that defies description and this film by Vera Chytilova that is widely considered to be a landmark film of the Czech New Wave in the 1960s is truly out of this world. It’s a film about these two women named Marie who just create havoc while being wined and dined by all of these rich men and just fuck things up all along the way. There are these moments in the film that are baffling to watch yet the sense of anarchy that these two women do just adds to the enjoyment of this film as it’s something film buffs need to see.

There’s weird and then there’s Alejandro Jodorowsky yet unlike Luis Bunuel, Jodorowsky is more concerned with spirituality and fear than the more social experiments of Bunuel. This 1973 cult classic is a story of a thief who encounter these images of spirituality as he finds salvation in this strange alchemist who makes claims about enlightenment. It is a film with wondrous images and incredible art direction while it is also a film that has moments that are fucked up. Notably the idea of a man taking a shit and the turd becomes gold as it adds to these strange questions of enlightenment.

This Japanese horror film about a group of young school girls who go to the home of one of the schoolgirls’ late aunt as strange shit happens. One of them involving a white cat and other strange shit that occurs in the house while there are a lot of things that is just bonkers. A severed head biting a girl’s butt, a killer piano, and the ghost of an aunt as it’s just a film that is just fucking insane. Yet, it is one of these horror films that is also so goddamn fun to watch.

I was in my 20s when I first saw this film and I had no idea what to think of it then and it’s still one of the weirdest films I had seen. Having been familiar with Lynch’s work from Blue Velvet and beyond, I had no idea what to expect from this film as it’s still one of these films that defies description. It is a film about this man who reunites with his old girlfriend who reveals that she has a new baby yet the baby is a strange-looking mutant that has its charm. The fact that it took years to make and it was a film made with a limited budget is proof of Lynch’s talents as well as bring surrealism to a new level. Notably in the films he would make in the years to come yet it’s this film that often brings me back as this or Mulholland Dr. are often considered to be his best film in my opinion.

For anyone that grew up watching the Disney Channel in the 1980s probably will remember this film and as a kid born in the 80s. This film fucked me up. It was scary as fuck as it’s about a kid who goes into some house and gets so spooked out that he loses his hair. Yet, he would find a way to get his hair back thanks to some ghosts and he succeeds but some awful shit occurs involving some evil criminals as it leads into the world of child labor and other fucked up shit. This is a film that is in dire need to be rediscovered.

I first saw this in my 20s when it was on IFC (when it used to show films uncut and uncensored) as I had no idea what to expect. I knew it was from Peter Jackson who was already hot with the Lord of the Rings trilogy and I saw this before Return of the King was to come out. It is fucking insane. A low-budget zombie movie about a guy whose over-protective mother was eaten by infected creature and then she becomes a zombie and so did many other people. That wasn’t the fucked up part. What was the most fucked up thing about that entire film? I only have 2 words: Zombie Baby!

8. Fear and Loathing in Las Vegas

I saw this in the late 90s as I wasn’t sure what to think of it as I was only 18-19 when I first saw it. Years later, I began to understand what Terry Gilliam was trying to do in his take on Hunter S. Thompson’s novel as well as capture the fall of the 1960s. The elements of psychedelic imagery and surrealism definitely captures the spirit of Thompson’s novel as does the performances of Johnny Depp and Benicio del Toro as it adds to the offbeat elements of the film. 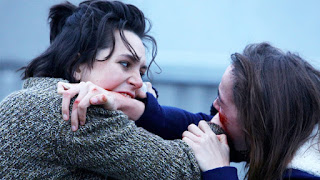 A recent discovery that I saw a few years ago is something I didn’t expect as it isn’t this conventional horror film. Yet, I was troubled by the fact that it’s a film about a young woman who attends veterinary school and has to endure a week-long hazing ritual involving red meat as she is a vegetarian. It is quite an original film that plays into the dangers of a woman being forced to do things against her will. Even to the point as she would gain rashes and other disturbing appetites as it was definitely weird up till the end as it just adds to the sense of horror that is in the film.

The most recent film I had seen in the past few months and I’m still baffled into what the fucking-fuck did I see. It’s a vacation comedy with a bit of suspense and the musical yet I’m just barely scratching the surface into the film as a whole. It’s about these two life-long friends who go on a vacation at a resort in Florida where they meet a man whose job is to carry a mission for an evil albino woman and things suddenly get stranger. Written and starring Kristen Wiig and Annie Mumulo as the titular characters with Wiig also playing the evil albino woman, the film feature things that are just bonkers. Jamie Dornan as an assassin who falls in love and dances, Damon Wayans Jr. as an agent who is terrible at hiding, a young Asian kid who sings Barbra Streisand early in the film, Morgan Freeman as a talking crab, and this is just a sample of the insanity that this film has. It’s stupid, ridiculous, and fucking odd yet it’s so goddamn hilarious.

I've seen exactly half of these. If you watch Hausu again, it's worth watching with the knowledge that the director survived the Hiroshima bombing. Through that lens, it's a very different experience.

I heard of most of these movies, but I haven't seen any of them. I would love to watch Eraserhead and Bar and Star sometime! Also, thanks for participating in this blogathon!

I've heard a few of these but haven't seen them. Some of the gifs could easily give me nightmares though. I'd like to see the Kristin Wiig comedy though. Nice list!

@SJHoneywell-I heard about that. That dude is a true survivor. I have heard of John Dies at the End but I've never seen it.

@Katy-Barb & Star is probably one of the most fucked up films I had ever seen and I've seen Salo.

I keep seeing this blogathon popping up, but I don't know if I've seen enough weird movies to come up w/ a list. I've never seen any of these, though that last one w/ Kristen Wiig + Jamie Dornan sounds hilarious. I guess I'd consider Dornan's other recent film Wild Mountain Thyme a weird movie, too, ahahaha.

@Ruth-I have gotten your email. I've saved it so I can buy the film later on through Amazon. Just to show my support.

Barb and Star Go to Vista del Mar is FUCKING INSANE. It is really unlike any film I had seen unless you're thinking of vacation films but... I was gobsmacked into what the fuck did I just see. Oh... and I did read the spoiler for Wild Mountain Thyme and.... WHAT THE FUCKING FUCK? SERIOUSLY? BEES? If I was a studio head who read the script and the ending... I'd be like... ARE YOU FUCKING SHITTING ME? GET THE FUCK OUT OF THIS BUILDING MOTHERFUCKER! TAKE YOU SHITTY-ASS SCRIPT WITH YOU! GET THE FUCK OUT!

Glad you got my email! Awwww... I'd be so thrilled to have you watch and review it!

As for Wild Mountain Thyme, yep it's absolutely bonkers!! I mean, it's the director of Moonstruck so I guess people who have won Oscars can somehow still get financing for something so idiotic!! I mean, I can't even believe something like that got greenlist, w/ good actors, too!! SMH

@Ruth-Actually, it was by the man who wrote Moonstruck since Norman Jewison has retired and hadn't made a film since 2003's The Statement with Michael Caine, Tilda Swinton, and Charlotte Rampling. He's 94 and still alive.