2013 Blind Spot Series: The Lovers on the Bridge 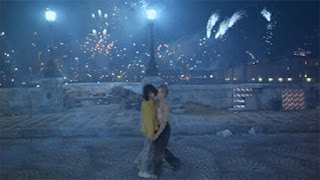 Written and directed by Leos Carax, Les Amants du Pont-Neuf (The Lovers on the Bridge) is the story about a drug-addicted street performer and a nearly-blind painter who meet and fall in love as they live in Pont-Neuf bridge as it’s being closed for repairs during the French Bicentennial. The film is an ambitious tale that revolves the lives of two outsiders who are dependent on each other as they live in a world that is ever changing. Starring Juliette Binoche and Denis Lavant. Les Amants du Pont-Neuf is a majestic yet exhilarating film from Leos Carax.

The film is a simple love story set in Paris at the Pont-Neuf bridge where it’s being closed for repairs during the French Bicentennial. Yet, the characters in this film in a street performer in Alex (Denis Lavant) and a painter in Michele (Juliette Binoche) are anything but simple characters as they’re two people on the fringe of society who are both lost as they find home in the ruined Pont-Neuf bridge which they share with a former guard named Hans (Klaus-Michael Gruber). The two do whatever to survive as they use the bridge as their home while not wanting to be part of a world that is filled with all of these expectations on how to live and such. For Alex, he’s just a street performer who needs downers to sleep as he has no interest to be part of society. In Michele, she’s a painter who is going blind with a bandage on her left eye as she is dealing with heartbreak of her own.

Leos Carax’s screenplay doesn’t follow any specific formulas about the idea of two people falling in love. Instead, it is more about these two people who don’t really know each other as they have nowhere else to go except this old bridge that is set to be repaired. The Pont-Neuf bridge isn’t just a character but a metaphor for how chaotic their life had become as they along with the bridge are in need of help. Still, they’re drawn together by their sense of alienation as well as the fact that they need each other as Alex needs someone to be with while Michele needs Alex as she is going blind. Throughout the course of the story, they act out during the Bicentennial as well as observing the world outside of the bridge. The love between them grows but there’s various complications that keeps them from being together as Michele is quite secretive about her life while Alex is dishonest and very destructive.

Carax’s direction is very stylish in not just the ambition that he aims for but also playing up a world that is quite chaotic in the middle of a ruined bridge in Paris. Though the film is actually set in Lansargues with a bridge built on a lake, it does give the idea that it’s being shot at the actual Pont-Neuf bridge. While some of Carax’s compositions are simple with its close-ups and medium shots, he does use a lot of tracking and steadicam to capture some of the livelier moments such as the extravagant Bicentennial celebration where Alex and Michele dance to all sorts of music and later steal a boat so that Michele can water ski on the Seine River. There are also chilling moments in the film’s third act where Alex takes action to protect Michele as she is being pursued as it plays to some very dark moments. Even as it would feature a climax that plays into what they’ve become as well as the idea about their love for each other. Overall, Carax creates a grand yet wild film about love and defiance.

Cinematographer Jean-Yves Escoffier does amazing work with the film‘s cinematography with the look of Paris in day and night along with the use of lights on the bridge as well as some stylish lights for some of the film‘s interiors. Editor Nelly Quettier does brilliant work with the editing as it has some element of styles with the use of jump-cuts and dissolves to play up some of its energy along with some rhythmic cuts for the suspenseful moments. Production designer Michel Vandestien, along with set decorator Irene Galitzine and art director Franck Schwarz, is fantastic for not just the recreation of the Pont-Neuf bridge and its surroundings along with some other set pieces including the museum Michele and Hans go into.

Costume designer Robert Nardone does nice work with the costumes as it‘s all ragged to play up the chaotic world of the characters. Sound editors Gilbert Courtois and Nadine Muse do superb work with the sound from some of the exterior surroundings to some of the intimate moments in some of the film’s interior scenes. The film’s soundtrack consists a lot of music ranging from classical pieces by Avro Part and other composers to contemporary music from David Bowie, Iggy Pop, Les Rita Mitsouko, and Public Enemy.

The film’s cast largely consists of appearances and small performance as it includes Chrichan Larsson as Michele’s former boyfriend Julian and Klaus-Michael Gruber as the vagrant Hans who has reasons for his dislike towards Michele as is also a man dealing with his own sense of loss. The film’s best performances definitely goes to both Juliette Binoche and Denis Lavant in their respective roles as Michele and Alex. Binoche brings a radiance and energy to a woman that is lost as she is dealing with a disease as well as being very secretive. Lavant is more outgoing in his performance as a street performer while being quite brutish at times. Binoche and Lavant have a fiery chemistry that is just engaging to watch as they are among one of the film’s major highlights.

Les Amants du Pont-Neuf is a magnificent film from Leos Carax that features incredible performances from Juliette Binoche and Denis Lavant. While it’s an unconventional love story, it’s one that is full of excitement and power as well as being a captivating story about alienation and defying the status quo. In the end, Les Amants du Pont-Neuf is an outstanding film from Leos Carax.

Great observation: "as they along with the bridge are in need of help"
From Carax, I've only seen Holy Motors and Lovers on the Bridge. While his 2012 film had some brilliant ideas, I prefer the story in his 1991 film, because was easier for me to connect with the characters. How would you rank Carax' films so far?

That's all I've seen so far. I'm going to check out more of his work either later this year or next year.