2013 Cannes Marathon: Uncle Boonmee Who Can Recall His Past Lives 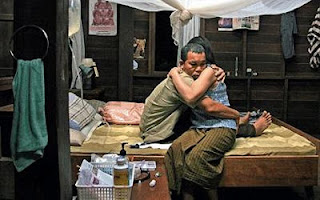 The film revolves around the last few days of a man who is visited by his sister-in-law and his nephew as they later receive a visit from the man’s dead wife and his son who had disappeared some years ago. In the course of the film, the family surround themselves with this man who knows he’s going to die as he recalls about his past in different parts of his life not really sure where he’s going next. Even as he is spending his final days in the Thailand countryside with a Laotian farmer as his very spiritual family also have to deal with questions over the disappearance of the man’s son where the mystery is solved. While the film’s screenplay doesn’t have much of a plot, it does play into the man known as Boonmee (Thanapat Saisaymar) thinking about his life while coming to terms with what he’s lost as well as what he’s going to leave behind to those who are close to him. Notably as he thinks about the events in his life that made an impact as he’s set to go into the afterlife.

The direction of Apichatpong Weerasethakul is quite simplistic in some of the imagery he conveys that recalls some of the minimalist visual style of the legendary Japanese filmmaker Yasujiro Ozu. The only major difference is that Weerasethakul shoots his scenes on a standing tripod with very little movements except in a few scenes where some things are moving including a shot in a small lake. Still, the compositions that Weerasethakul creates that are filled with gorgeous images of the northern Thailand countryside with its jungles, mountains, and caves. Even scenes at Boonmee’s home are just filled with beauty where the camera just stay stills and let things play out where there are some moments that do play into this world of death with the appearances of Boonmee’s late wife Huay (Natthakarn Aphaiwong) and his late son Boonsong (Jeerasak Kulhong).

There aren’t any flashback scenes as far as how they’re told conventionally though there is a sequence where Boonsong reveals what happened to him and why he looks the way he is after his disappearance. It has this air of mystery but also something that is entrancing where it would play into Boonmee’s decision as it’s third act becomes this very evocative moment where he and his family trek through the caves. It plays into Boonmee’s decision about what he’s going to do in his final moments where it’s aftermath has his family returning to Bangkok where things are different but still has this air of spirituality. Overall, Weerasethakul creates a mesmerizing yet powerful film about life and death.

Cinematographer Sayombhu Mukdeeprom, with additional contributions from Yukontorn Mingmongkon and Charin Pengpanich, does amazing work with the film‘s very colorful yet naturalistic photography that is shot in 16mm film where many of its daytime scenes are exquisite while the nighttime scenes are more stylized to convey that sense of death. Editor Lee Chatametikool does excellent work with the editing as it‘s low-key except in a few rhythmic cuts to play out the drama. Production designer Akekarat Homlaor does nice work with the look of Boonmee’s home that is quite simple to play out the world he lives in

Costume designers Chatchai Chaiyon and Buangoen Ngamcharoenputtasri do terrific work with the costumes as most of it is casual with the exception of the princess one of Boonmee‘s stories about his past. Sound designers Akritchalerm Kalayanamirt and Koichi Shimizu do fantastic work with the sound to capture the essence of the countryside locations with its minimal approach to sound while capturing whatever music that is played in the background including a rock song at the end of the film.

The casting by Sakda Kaewbuadee and Panjaj Sirisuwan is wonderful as it features some noteworthy small roles from Wallapa Mongkolprasert as the princess and Sumit Suebsee as the soldier where they both appear in a story about one of Boonmee’s past lives while Kanokporn Thongaram is very good as Jen’s niece and Samud Kugasang is excellent as Boonmee’s Laotian farmer friend Jai. Natthakarn Aphaiwong is terrific as Boonmee’s late wife who appears to the family as a ghost while Jeerasak Kulhong is superb as Boonmee’s late song Boonsong who also makes an appearance revealing what happened to him when he disappeared.

Sakda Kaewbuadee is amazing as Boonmee’s monk nephew Thong who aids his uncle in his final moments while Jenjira Pongpas is brilliant as Boonmee’s sister-in-law Jen who is trying to understand the mysteries around them while getting to know the man who had married her sister. Finally, there’s Thanapat Saisaymar in a remarkable performance as Uncle Boonmee as a dying man trying to spend his last moments being alive whether it’s farming or recalling about his past as he is the heart and soul of the film.

They showed Uncle Boonmee at the local college film series when it came out, and I was lucky enough to catch it. It's so relaxing and sedate that I actually got pretty sleepy watching it, but I don't mean that in a bad way. It's an entrancing film with great moments, and I was thinking about the ending for a long time afterwards. I'm glad you were able to see it!

Same here. There's an advantage to doing these marathons which is making some discoveries and this one is one of them. I still have a few more films to go as I'm eager to check out more work from the man who made this film. It's truly a work of genius and deserving of the Palme d'Or.