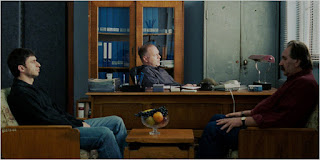 Written and directed by Corneliu Porumboiu, Police, Adjective is the story of a police officer who questions his role after busting a teenage boy caught smoking hashish. The film is a look into the life of a young policeman who is conflicted over what to do as a man and as a police officer. Starring Dragos Bucur, Vlad Ivanov, and Ion Stoica. Police, Adjective is a chilling yet powerful drama from Corneliu Porumboiu.

The film is about the few days in the life of a policeman in Bucharest, Romania as he is eyeing a young kid who is rumored to be a hashish dealer. While he doesn’t think the kid is going to do anything wrong as laws about hashish/marijuana possession are likely to be changed. He knows that if he arrests the kid, he’ll ruin that boy’s life as he’ll be put in prison for some years even if he only carried a few grams of the substance. The film definitely follows this man named Cristi (Dragos Bucur) who is conflicted over what to do as he is told by his captain (Vlad Ivanov) about what to do though he claims the kid will get a reduced sentence.

Corneliu Porumboiu’s screenplay doesn’t have much of a plot as it is more about an officer dealing with his role while trying to see if there’s any valid evidence to arrest this young teenager. Even as Cristi is aware that the world is changing as he and his new wife had just returned from a honeymoon in Prague where he had seen people smoking hashish and is aware of the laws that are happening in Czech Republic. Still, he is faced with opposition in the police force about his conflict while things aren’t any easier as his young informant Alex (Alexandru Sabadac) doesn’t reveal anything that can be incriminating.

Porumboiu’s direction is quite simple in terms of the compositions he creates with a lot of wide and medium shots with some movements in the camera. Yet, he does infuse his scenes with a lot of long takes to establish some key moments of the story including playing out the drama in real time. There are no big moments in the film but rather smaller ones from the way Cristi arrives to his office and do his reports as well as come home at night where either his wife is making dinner or dinner is being made. Yet, it is all about Cristi trying to see if there is anything bad happening where he would follow a few people from afar so he wouldn’t raise suspicions while looking out at the home of this kid who could be the dealer. One key scene that is very engaging is the penultimate sequence where Cristi delivers his report to the captain as it’s a very powerful moment that plays into the conflict that Cristi is dealing with. Overall, Porumboiu creates a very haunting yet eerie film about doing what is right.

Cinematographer Marius Panduru does excellent work with the film‘s cinematography as it‘s mostly straightforward while using a few lighting schemes for some scenes at night. Editor Roxana Szel does nice work with the editing only to create a few rhythmic cuts to intensify some of the drama as a lot of it is quite methodical. Production designer Mihalea Poenaru does terrific work with the set pieces from the look of the police station to the quaint apartment that Cristi lives in with his wife. Costume designer Georgiana Bostan does some fine work with the costumes as it‘s mostly casual. Sound recorder Christian Mike Sugar does wonderful work with the sound as it’s mostly low-key and atmospheric with the exception of a scene in Cristi’s apartment where his wife is listening to a Romanian pop ballad.

The film’s cast is brilliant as it mostly features small roles from Alexandru Sabadac as Cristi’s informant, Radu Costin as the supposed dealer, Irina Saulescu as Cristi’s wife Anca, and Ion Stoica as Cristi’s fellow officer Nelu. Vlad Ivanov is excellent as Captain Anghelache who tells Cristi what a cop should be as he later tells him about what the law means as well as some of its fallacies that adds more conflict for Cristi. Finally, there’s Dragos Bucur in a marvelous performance as Cristi as a young man who knows what it means to be young while he knows that he’s a cop but doesn’t want to ruin a young man’s life for something that he would later not be in trouble for.

Police, Adjective is an intriguing yet riveting drama from Corneliu Porumboiu. The film is a captivating look into the world of what the police does as well as the conflict into serving justice while things are becoming complicated. Notably in Romania where it plays to a cop who is aware of things changing around him outside dealing with the guilt that he might face. In the end, Police, Adjective is a superb film from Corneliu Porumboiu.

I love this one. Porumboiu manages to make a mundane and rather pointless investigation into a terrific film. I even enjoyed that scene in the apartment with that pop song. Not the song itself, but the couples' interaction, and the understanding of their characters and lives.

That is a great scene. It has that song being played over and over again and they bicker over it's meaning. I'm eager to check out more films of the Romanian New Wave. Maybe I should do a marathon on that soon.