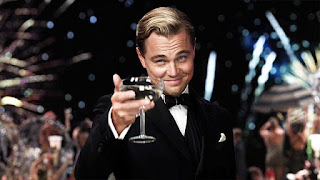 Based on the novel by F. Scott Fitzgerald, The Great Gatsby is the story of a millionaire in the Roaring 20s as he lives an extravagant life as his new neighbor tries to get to know him and the mysteries about this millionaire. Directed by Baz Luhrmann and Luhrmann and Craig Pearce, the film is a stylized take on the famed novel with lots of lavish set pieces with a soundtrack that is mixture of 20s jazz with contemporary pop music. Starring Leonardo diCaprio, Tobey Maguire, Carey Mulligan, Joel Edgerton, Isla Fisher, Elizabeth Debicki, Jason Clarke, and Amitabh Bachchan as Meyer Wolfsheim. The Great Gatsby is a lavish yet mesmerizing film from Baz Luhrmann.

The film is the story a mysterious millionaire who throws these lavish parties in the hopes that an old flame would return to him to rekindle the love they once had. Yet, it is told largely from the perspective that millionaire’s neighbor Nick Carraway (Tobey Maguire) who is given personal access to the life and mind of this mysterious man known as Jay Gatsby (Leonardo diCaprio) as he recalls his time with the millionaire to a doctor (Jack Thompson). While Carraway tells this story, he delves into the mystery of Gatsby and his love for Carraway’s cousin Daisy (Carey Mulligan) who is married to a former polo player in Tom Buchanan (Joel Edgerton). Yet, secrets are unveiled as Carraway tries to guard everything about Gatsby who is eager to revive an old past that can’t be replicated.

The screenplay that Baz Luhrmann and Craig Pearce creates moves back-and-forth as it is told from a weary Carraway at a hospital many years after the events of the story. While it’s a narrative device that Luhrmann had used before, it does help to play into the many mysteries that are slowly revealed. Notably the character of Gatsby himself as he throws these very lavish parties but few people see him with the exception of Carraway and a famed golf pro in Jordan Baker (Elizabeth Debicki) as the latter sort of knows Gatsby. There is still a traditional three-act structure in the film where the first act is about Carraway’s arrival in 1920s New York City where he lives next door to Gatsby as he later meets him. The second act is Carraway reintroducing Gatsby to Daisy as the two try to replicate what they once had. The third is Gatsby’s attempt to win Daisy all over again for good in an attempt to repeat the past only to be exposed by the jealous Buchanan.

Carraway is the film’s observer as he would also take part in some of the decadence that occurs but he’s also the great protector where he would guard secrets but sometimes it would be the detriment to those involved. The character of Daisy is sort of this aloof young woman who has married this former polo champion who is also a philandering man with a mistress in Myrtle Wilson (Isla Fisher). By coming back to Gatsby, she is eager to find happiness again but she becomes conflicted in her devotion to Buchanan who is suspicious about Gatsby as he becomes a very conniving individual eager to expose Gatsby to the world. He would also be the person that would play into Gatsby’s fall in the third act as it leads to some tragic consequences that Carraway would never recover from.

Luhrmann’s direction is definitely outrageous as he goes for something that is very decadent as well as extravagant to play up the energy of the 1920s. Still, it emphasizes into what Luhrmann wanted to reveal into a world that is sort of out of touch with reality where Gatsby is this shadowy party host who has more ambiguous intentions for these parties. For the Carraway character, Luhrmann displays him as a man who is in the action but also out of the action as a man lost in a very crazy world. Luhrmann definitely creates a lot of compositions and set pieces that play up to that sense of excitement where these parties are out of control. Yet, he also does slow things a bit when it comes to the romance between Gatsby and Daisy as if it’s all about trying to repeat the past.

Since it is told from Carraway’s perspective as it uses a lot of voice-over narration, it does play into something where it is about a young man trying to find himself in the wake of this very chaotic period of time. Though there’s some flaws in the narration since it does give away a lot, it does help to flesh out some of the characters. While there are moments in the film where the decadent moments can be a bit overwhelming, it is balanced by some very lush scenes that unveil a sense of longing as well as the tragedy that comes into play in the third act. The direction is very stylized in where Luhrmann places the camera as well as the setting he creates where there is some tension but also drama. Overall, Luhrmann creates a very exciting and poignant film about love and secrets in a period of decadence.

Cinematographer Simon Duggan does excellent work with the film‘s very colorful cinematography with its exotic colors of the daytime and nighttime exteriors including some lighting schemes in the interiors plus some lush coloring for some of its flashback scenes. Editors Matt Villa, Jason Ballantine, and Jonathan Redmond do some nice work with the editing though it sometimes go a bit fast to play out that sense of chaos while it does slow down a bit as the film goes on to get a sense of what is happening in the drama. Production/costume designer Catherine Martin, with set decorator Beverley Dunn and supervising art director Ian Gracie, does amazing work with the lavish set pieces such as the Gatsby home and the look of 1920s New York City while the costumes are very colorful and full of style as it plays to the period of the times.

Hair designer Kerry Warn and makeup designer Maurizio Silvi do brilliant work with the look of the characters from the hair and some of the makeup to play that sense of sensationalism. Visual effects supervisor Tony Cole does terrific work with the visual effects for some of the exteriors of New York City to some backdrops for the surroundings the characters inhabit. Sound designer Wayne Pashley does superb work with the sound from the way the parties play out with its sense of energy to some of the intimate moments in the film. The film’s music by Craig Armstrong is wonderful for its lush orchestral music to play out the sense of romance between Gatsby and Daisy as well as some more heavy pieces to play out it‘s melancholia. Music supervisor Anton Monsted creates a very fine soundtrack of music that features an array of 20s jazz music mixed in with contemporary pop music from Jay-Z, the xx, Lana del Rey, Emile Sande, Fergie, and many others.

The casting by Nikki Barrett and Ronna Kress is fantastic for the ensemble that is created as it features some appearances from Barry Otto as a partygoer, Conor Forgarty as Gatsby’s butler, Adelaide Clemons as Myrtle’s cousin Catherine, Callan McAullife as the young Gatsby, and Jack Thompson as Carraway’s doctor Walter Perkins. Amitabh Bachchan is excellent as the gangster Meyer Wolfsheim as a man who is full of charisma as he treats Gatsby like an old friend while Jason Clarke is terrific as the oblivious George Wilson. Isla Fisher is wonderful as the very needy mistress Myrtle Wilson who feels slighted by Buchanan while Elizabeth Debicki is amazing as the very fun yet knowing Jordan Baker who guides Carraway into the world of the rich.

Joel Edgerton is great as the very devious Tom Buchanan as a man who does love Daisy but is suspicious about Gatsby though he admits to his own flaws as a man. Carey Mulligan is superb as Daisy Buchanan as a young woman who becomes conflicted in her devotion to Tom and her love for Gatsby as she’s also sort of flighty. Tobey Maguire is brilliant as Nick Carraway as an outsider who becomes part of the world while becoming the one person bearing the responsibility to carry the secrets he has learned from the people he meets. Finally, there’s Leonardo diCaprio in a remarkable role as Jay Gatsby as he’s a man that exudes charm and with while being totally cool where diCaprio also shows some humor in his performance as well as humility in the third as it is one of his finest performances.

The Great Gatsby is a marvelous film from Baz Luhrmann that features a phenomenal performance from Leonardo diCaprio. Along with a great supporting cast and some amazing technical work, the film is definitely a very sensational and excessive film that isn’t afraid to be style over substance. While it does have some flaws, it is still a film that is engaging for exploring that world of 1920s decadence as well as a man’s desire to reclaim the past. In the end, The Great Gatsby is a sprawling yet exciting film from Baz Luhrmann.

Shit man, I had no interest in seeing this film, but given your very positive review, I need to seriously rethink my stance.

When it comes to Baz Luhrmann, don't really take anything seriously. Yes, he is style over substance and makes a spectacle of himself but it's always a fun one. It is flawed but it's pretty worthwhile. Especially for Leo.

Very nice review. I hope you don't mind. I put your review in a fun debate against Can't stop The Movies' in one of my latest posts

@Jason Hemming-Hey, as long as I'm being read. I'm cool with that.

I loved the acting and costume design.

I wish if he was going to modernize the soundtrack he had just gone all in and set the film in a sort of present day world like he did with R&J.

The fancy camera work, 3D, and modern soundtrack distracted me from the story.

@3guys1movie-I don't think a modern-day version of that story would've worked. I think Luhrmann's approach to the music was more in tune with what Sofia Coppola did with Marie Antoinette though I think Coppola did a better job in that film as far as choosing music as opposed to some of the artists that appear in Luhrmann's film.