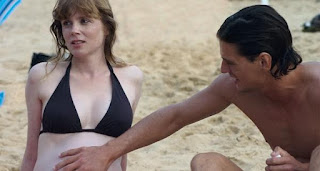 Directed by Francois Ozon and written by Ozon and Mathieu Hippeau, Le Refuge is the story of a woman whose lover had passed away as she learns she is pregnant. Wanting to isolate herself, she meets up with her lover’s gay brother as he joins her in their grief. The film is an exploration into the world of death as it involves two different people who don’t know each other as they’re connected by someone they know and care for. Starring Isabelle Carre, Louis-Ronan Choisy, Pierre Louis-Calixte, and Melvil Poupaud. Le Refuge is a compelling yet touching drama from Francois Ozon.

When death happens to someone that is loved dearly, the reaction can be overwhelming. For a woman named Mousse (Isabelle Carre), the death of her boyfriend Louis (Melvil Poupaud) from a drug overdose has left her devastated as she also learns she is pregnant. By taking refuge at a country home somewhere in the French coast, she is later joined by Louis’ brother Paul (Louis-Ronan Choisy) who stops by as the two are still trying to comprehend Louis’ death as well as what to do with Mousse’s baby. It’s all part of this story that Francois Ozon and co-writer Mathieu Hippeau are doing where it’s more about these two people, who don’t really know each other, come together based on grief as well as the prospect of someone coming into the world.

While there isn’t much of a story in the script, it’s more driven by characters and their reaction to death as Mousse is living all alone not wanting anyone to know that she is keeping the baby while she is also trying to kick her heroin habit through methadone syrups. The only people that know that Mousse is pregnant is Paul and a handyman named Serge (Pierre Louis-Calixte) who later forms a relationship with Paul. While she and Paul take the time to get to know one another, there are revelations into their own relationships with Louis as both of them do venture out of their own as they also need each other to deal with their grief.

Ozon’s direction is very understated as he doesn’t really aim for a particular visual style as he keeps things simple and to the point. A lot of the compositions are very straightforward but also direct as it’s shot largely in the French countryside near a beach as it represents a world that is calm as well as detached from any sense of a more chaotic world. While there some establishing shots of those locations, Ozon doesn’t go for a lot of close-ups in order to get coverage of the characters and their surroundings while the scenes in Paris are more eerie as well as discomforting. The drama is also restrained in order to capture the characters’ reaction towards their loss where Mousse would make a decision regarding her child in the end of the film as it plays to something much bigger than Louis’ death. Overall, Ozon creates a very delicate yet mesmerizing film about grief and the anticipation for a new person coming into the world.

Cinematographer Mathias Raaflaub does excellent work with the cinematography from the use of low-key colors in the scenes in Paris to using more brighter colors for some of the daytime scenes in the beach and countryside while keeping things low-key in its interior scenes. Editor Muriel Breton does nice work with the editing as it is very simple without a lot of cutting styles with a few rhythmic cuts for a club scene in the film. Production designer Katia Wyszkop does terrific work with the look of the country home that Mousse stays in. Costume designer Pascaline Chavanne does wonderful work with the costumes as it‘s low-key and simple to express the personality of the characters.

Sound editor Benoit Gargonne does superb work with the sound to play up some of the quietness of the film including a few scenes where the piano is played around the house. The film’s music by Louis-Ronan Choisy is amazing as it is melancholic with just the sounds of a plaintive piano and a somber guitar to express the sense of loss in the film.

The casting by Sarah Teper is brilliant as it features mostly a small cast that includes Emile Berling as the drug dealer who gives Louis the fatal drug, Jean-Pierre Andreani as Louis/Paul’s father, Marie Riviere as a woman Mousse meets at the beach, and Claire Vernet as Louis/Paul’s mother who tells Mousse early in the film to get an abortion as Mousse is startled by that comment until Paul later reveals some things about Louis’ relationship with their mother. Pierre Louis-Calixte is very good as the handyman Serge that Paul befriends while Melvil Poupaud is excellent in his small role as Louis. Louis-Ronan Choisy is wonderful as Paul as a man who arrives to see Mousse as he shares his grief over his brother as he later helps her. Finally, there’s Isabelle Carre in a splendid performance as Mousse as a woman dealing with loss and her pregnancy as she tries to come to terms with everything as it’s a very intoxicating performance to watch.

Le Refuge is an enriching yet subtle film from Francois Ozon that is highlighted by the evocative performance of Isabelle Carre. The film is definitely one of Ozon’s most intriguing as well as his most restrained film to date. Even as he goes into further exploration into the world of grief as well as the arrival of a new life. In the end, Le Refuge is a remarkable film from Francois Ozon.

This is my least favourite of the four Ozon films that I have seen. Not a bad film by any means but just a disappointing one compared to his other works. I found the first half to be far more compelling than the latter.

I respectfully disagree with you as I think it's one of his more engaging films as I put in my top 5 Ozon films so far.