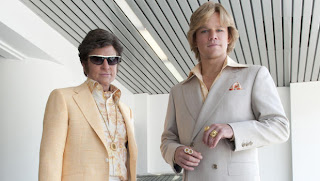 Based on the book Behind the Candelabra: My Life with Liberace by Scott Thorson and Alex Thorleifson, Behind the Candelabra is the story about Thorson’s affair with the famed pianist Liberace during the late 1970s where they endured all sorts of trials and tribulations to keep the affair a secret from the public. Directed by Steven Soderbergh and screenplay by Richard LaGravenese, the film is a look into the life of one of the great entertainers of the 20th Century and the secret life he had with a young man as Liberace is played by Michael Douglas and Matt Damon as Scott Thorson. Also starring Dan Aykroyd, Scott Bakula, Cheyenne Jackson, Rob Lowe, Tom Papa, Paul Reiser, and Debbie Reynolds as Frances Liberace. Behind the Candelabra is a majestic yet sensational film from Steven Soderbergh.

Liberace was known as a man of flamboyance and showmanship who loved to dress in lavish designer suits that is often very excessive while his piano designs play up to his personality. Yet, the man was an entertainer who believed that too much of a good thing is wonderful. Still, there is the private side of Liberace that the public didn’t really know about until after his death in February of 1987 where it was revealed that he was gay. What this film is about is Liberace’s love affair with a young man named Scott Thorson who wouldn’t just be Liberace’s assistant and chauffer in his shows but the relationship they had was loving but also tumultuous. Largely as Liberace would start to stray from the relationship making Thorson more insecure as he becomes addicted to drugs. It’s a story that is told in the span of a decade where the relationship would have its ups and downs though there was a real love between these two men.

Richard LaGravenese’ screenplay takes it time to explore how this relationship was formed with Thorson attended a show with another gay man in Bob Black (Scott Bakula) who knew Liberace as he would introduce Thorson to the man. Since Thorson was a young animal trainer who aspired to be a veterinarian, Liberace invited to his home to help tend one of his sick dogs as a love affair ensued though Thorson isn’t aware that he’s becoming one of many lovers Liberace has had previously that had come and gone including his protégée Billy Leatherwood (Cheyenne Jackson) and a butler named Carlucci (Bruce Ramsay). What wasn’t expected is that the affair would become much deeper to the point that Liberace would hire a drug-addicted plastic surgeon in Dr. Jack Startz (Rob Lowe) to make Scott look a bit like Liberace himself.

That would eventually play to some of the troubles of the relationship as Thorson begins to feel insecure as he is addicted to drugs while he isn’t taken seriously by some of Liberace’s personnel including manager Seymour Heller (Dan Aykroyd). Adding to the insecurities is the fact that Liberace likes to sleep with other men including a young dancer named Cary (Boyd Holbrook) which would eventually play to their split where Thorson would try to expose Liberace in the early 80s only to fail. While there are some dramatic liberties that LaGravenese does with his screenplay in order to dramatize the story, he does make sure that it is still a love story that has an element of camp but also drama. The dialogue is also quite stylish as it plays up to some of Liberace’s own campy personality on and off the stage as well as maintaining some realism over the intensity of the relationship between the two men.

The direction of Steven Soderbergh definitely plays up to that sense of excess that Liberace is known for where he utilizes a lot of stylish compositions but also keep things at a minimum to explore the complexity of this relationship between Liberace and Thorson. With the use of tracking shots, wide shots, and other camera angles, he creates a film that is about the secret life of a man seen from the perspective of a younger man. There are also shots that would mirror similar situations where Thorson is watching Liberace talking to younger men that also echoed a similar scene where Billy Leatherwood is shot in a close-up while Thorson and Liberace are blurred in the background though their dialogue can be heard quite clearly.

There are also moments in the direction where Soderbergh creates an element of camp that includes a very funny scene of Liberace and Thorson watching Johnny Carson where Liberace is aghast over how old he looks. Even the scenes of Liberace playing the piano in his stage performances maintain that sense of decadence where Soderbergh knows that excess is best. Through his very colorful yet lavish cinematography, under his Peter Andrews alias, where he uses lights to create a sense of atmosphere in the film’s humor and drama. Soderbergh also creates an element of drama in its third act where not only does Thorson deal with loss in a big way but also betrayal. Through his editing, under the Mary Ann Bernard alias, where Soderbergh creates some fantastic montages and rhythmic cuts to play up the drama that comes in that third act.

Even in some of the attention to detail where it reveals a moment in time when all of that excess would finally come to haunt Liberace in the end. It’s in these moments where Soderbergh does restrain things to create a sense of calm and normalcy where it definitely has a melancholia in the imagery that he’s conveying. Since the film is about Liberace, Soderbergh knows that he can’t end the film on a down note. It has to end in style and the way he chooses to end the film isn’t just about Liberace but also the love he had with Scott Thorson. Overall, Soderbergh creates a very heartfelt and engaging film about Liberace and his secret relationship with Scott Thorson.

Production designer Howard Cummings, along with set decorator Barbara Munch and art director Patrick M. Sullivan Jr., does brilliant work with the set pieces from the look of Liberace‘s home to his stage shows where everything is excessive and lavish that includes two of everything and little model pianos to play up Liberace‘s sense of generosity to those he love. Costume designer Ellen Mirojnick does amazing work with the costumes as they‘re always filled with style from the fur coats, the suits, capes, and everything else that is all a part of Liberace‘s world of decadence. The makeup and hair design work is also worth noting for the hair styles that play up the world of the late 70s and early 80s as well as Liberace’s own hair and how his face evolved through his plastic surgeries including Thorson who also looked a younger version of Liberace after his surgery.

Visual effects supervisor Thomas J. Smith does superb work with some of the film‘s minimal visual effects such as the TV stuff that Liberace watches that he‘s in along with some backdrop dressing for some scenes in Las Vegas and Palm Springs. Sound editor Larry Blake does excellent work with the sound to capture the atmosphere of the performance as well as some of the intimate moments between Liberace and Thorson as it would also play into their dissolution. The music adaptation by the late Marvin Hamlisch is fantastic for the piano pieces Hamlisch selects as well as some playful score music from the composer as he makes the music a major highlight that isn’t just about Liberace but also a great tribute to Hamlisch himself whom the film is dedicated to.

The casting by Carmen Cuba is marvelous for the actors that is assembled for this film as it features appearances from David Koechner as an adoption attorney, Josh Meyers as Liberace’s attorney in Thorson’s palimony suit, Jane Morris as Scott’s adopted mother Rose, Nicky Katt as the drug dealer Mr. Y, Cheyenne Jackson as Liberace’s protégée Billy Leatherwood, Bruce Ramsay as Liberace’s gay butler Carlucci, and Boyd Holbrook as a Young Americans dancer named Cary whom Liberace gets interested in as he would usurp Scott. Other notable small performances include Paul Reiser as Thorson’s attorney in the palimony suit, Tom Papa as Liberace’s head assistant Ray Arnett, and Scott Bakula as Bob Black who would introduce Scott to Liberace.

Debbie Reynolds is amazing as Liberace’s mother Frances where Reynolds looks unrecognizable as an old European woman who adores her son while is one of the few people who is very kind to Thorson as Reynolds steals every scene she’s in. Rob Lowe is hilarious as the freaky-looking plastic surgeon Dr. Jack Startz as a man who looks like he’s had too many facelifts while doesn’t really know what he’s talking about as he claims to know so much. Dan Aykroyd is superb as Liberace’s manager Seymour Heller who doesn’t have much of an opinion towards Scott as he’s very straightforward while being Liberace’s great protector from all sorts of things as he is also the guy who takes care of things.

The film’s best performances definitely go to the duo of Michael Douglas and Matt Damon in their respective roles as Liberace and Scott Thorson. Damon exudes all of the naiveté and frustrations of a young man who is caught up in Liberace’s world as he seeks to find himself while dealing with Liberace’s affairs with other men. Douglas is a real surprise as he plays up all of the charm that is Liberace while not being afraid to go camp as he can be funny but also quite dramatic. The two together make a fantastic duo in the way they play off each other in all of its moments whether it’s funny, romantic, or dramatic as they are key reasons for the film’s success.

Behind the Candelabra is a tremendous film from Steven Soderbergh that features outstanding performances from Michael Douglas and Matt Damon. The film isn’t just a very genuine and compelling love story but also a look into the life of one of the great entertainers of the 20th Century and the secret life that he had. If this film is Steven Soderbergh’s final contribution to cinema, at least he goes out with a winner and in grand style. In the end, Behind the Candelabra is a fabulous and sensational film from Steven Soderbergh.

Great review! I didn't like the movie nearly as much as you did but I agree about the performances being very good, especially Lowe.

So glad you liked this one so much. I didn't have a chance to mention Debbie Reynolds in my review, but yes, how amazing. Such spite.

Of course Douglas and Damon killed it. I loved what they did here.

@Sati-Rob Lowe was a riot. I too wouldn't mind if they made a film about that guy. Best performance by Rob Lowe I've seen in years.

@Alex-Right now, this is my favorite film of the year so far. Damn you Hollywood for thinking this film is too gay. I have no problem with that. I had fun watching this film but I was also sad that it might be Soderbergh's last film. Bring on those Emmys and Golden Globes and polish them up real nice for all of those involved.