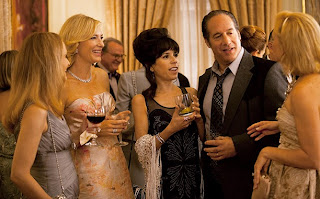 Written and directed by Woody Allen, Blue Jasmine is the story about a woman whose husband had been arrested over his criminal activities forcing her to live with her estranged sister in San Francisco as she tries to get her life back on track. The film is an exploration into a woman trying to start over as she had been nearly thwarted by scandal as she turns to her younger sister for help despite her middle-class lifestyle. Starring Cate Blanchett, Sally Hawkins, Peter Sarsgaard, Andrew Dice Clay, Bobby Cannavale, Louis C.K., Michael Stuhlbarg, and Alec Baldwin. Blue Jasmine is a brilliant yet captivating film from Woody Allen.

What happens to a woman whose wealthy life comes crashes down when her husband is revealed to be a crook as she is forced to move in with her working-class sister? That is essentially the premise of the film where Jasmine Francis (Cate Blanchett) has lost everything as she spent the last of whatever little money she had left to fly from New York City to San Francisco to live with her estranged adopted sister Ginger (Sally Hawkins) and her two kids. Yet, Jasmine is appalled by her sister’s lower-middle class lifestyle and her choice of men as she is desperate to get herself back to the upper-class life but her mental state as well as reflections of her old life with her former husband Hal (Alec Baldwin) would make her uneasy around many people including Ginger.

Woody Allen creates a very interesting narrative where it moves back-and-forth from the new life that Jasmine has to live in San Francisco and the old life she had in New York City where she had money, lived in expensive houses, wore expensive clothes, and have the finest social gatherings out there. Though Ginger and her ex-husband Augie (Andrew Dice Clay) were impressed by what Jasmine and Hal had during their trip to NYC, they preferred the simpler life though Ginger would be the one to discover something about Hal that she had kept a secret until everything went wrong. Due to Hal’s financial schemes, Augie’s chance to have his own business is finished that led to him and Ginger getting a divorced as Ginger is trying to have a new relationship with a mechanic named Chili (Bobby Cannavale).

One aspect of the script that is very interesting is Jasmine’s own sense of elitism and narcissism as she criticizes her sister for the life she lives and the idea that Ginger is always around men whom she thinks are losers. Though Ginger would later meet a sound engineer named Al (Louis C.K.) at a party where Jasmine would meet an aspiring politician named Dwight (Peter Sarsgaard). Ginger’s relationship with Al would only make her feel insecure as she becomes confused of whether to be with Al or Chili. Jasmine’s own pursuit of Dwight would eventually be her own undoing as she would lie to win Dwight’s heart but elements of her past would come back to haunt her.

Allen’s direction is quite straightforward in the way he presents the film while he gives the scenes set in New York City and San Francisco different atmospheres into the way it plays to Jasmine’s life. For the flashback scenes in New York City, everything is vast and posh where it’s all set in very rich sections including some of the beach homes that Jasmine and Hal lived in. Yet, it’s also quite artificial in some ways to showcase that not everything is as it seems to be. Allen’s approach for the scenes set in San Francisco is far more grounded with the exception of a few scenes where Jasmine is with Dwight as he turns to her about what to do with his new house.

Still, the places that Ginger and her friends take Jasmine to is a mixture of working-class environments and such that is definitely removed from the world that Jasmine is used to. Even as Jasmine reluctantly takes a job working as a receptionist for a dentist (Michael Stuhlbarg) where the direction is tighter but also quite entrancing. Even in the scenes where Jasmine is in a location talking to herself unaware of how mentally ill she’s becoming. Allen would put Jasmine often at the edge of the frame to showcase how detached she’s becoming while everyone around her is either moving on without or are just disturbed by her behavior. Overall, Allen creates a very mesmerizing film about a woman on the verge of collapse as she reluctantly faces reality.

Cinematographer Javier Aguirresarobe does amazing work with the cinematography from the lush and colorful look of New York City to the more simplistic look of San Francisco. Editor Alisa Lepselter does fantastic work with the editing by playing to the film‘s back-and-forth structure to help establish Jasmine‘s dramatic state of mind. Production designer Santo Loquasto, with set decorators Kris Boxell and Regina Graves and art directors Michael E. Goldman and Doug Hustzi, does excellent work with the set pieces from the homes that Jasmine and Hal lived in to the more quaint, simpler apartment that Ginger lives in.

Costume designer Suzy Benzinger does superb work with the costumes from the posh clothes that Jasmine wears to the more blue-collar look of Ginger to display the two different worlds the women live in. Sound editor Robert Hein does nice work with the sound from the chaotic world of Ginger‘s apartment to the more serene world that Jasmine used to live in. The film’s wonderful soundtrack largely consists of jazz music from Louis Armstrong, King Oliver, Jimmy Noone, Lizzie Miles, Conal Fowkes, Julius Block, and Trixie Smith as it all would play to Jasmine’s state of mind as she would often say how Blue Moon reminds her of how she met Hal.

The casting by Juliet Taylor and Patricia Kerrigan DiCerto is brilliant for the ensemble that is created as it features some notable small performances from Max Rutherford and Daniel Jenks as Ginger and Augie’s sons, Charlie Tahan as the adolescent version of Hal’s son Danny, Tammy Blanchard and Annie McNamara as a couple of Jasmine’s friends, and Max Casella as a friend of Chili’s who tries to woo Jasmine. Other noteworthy small yet effective supporting performances include Michael Stuhlbarg as a dentist Jasmine briefly works for while Alden Ehrenreich is terrific as Hal’s son Danny who disappears after feeling humiliated over what his father did. Louis C.K. is excellent as Al as a man Ginger meets at a party as she thinks he could be someone that Jasmine would like. Bobby Cannavale is amazing as Chili as an auto mechanic who loves Ginger while tries to be nice to Jasmine only to feel insecure as he desperately tries to do right for Ginger despite his anger.

Peter Sarsgaard is superb as the aspiring politician Dwight who falls for Jasmine and wants to marry her until he learns the truth about who she is. Andrew Dice Clay is fantastic in a small but memorable performance as Ginger’s ex-husband Augie who is stung by a deal gone bad thanks to Hal as Clay brings a charm to his role in the flashbacks as a simple guy while has this scene with Blanchett that shows a bitterness and loss that he is suffering from which makes his performance a real surprise from the famed comedian. Alec Baldwin is great as Hal as a man who is a schemer that gives Jasmine this very lavish world only to be unveiled as a crook who had stolen from everyone including Augie.

The film’s best performances definitely go to both Sally Hawkins and Cate Blanchett. Hawkins brings a liveliness to the role of Ginger as a woman who has a complicated life but one that she can handle as she is also trying to find something better while eventually coming to the conclusion that she might need more after all. Blanchett is tremendous as Jasmine where she brings this very intense performance of a woman whose life crashes down as she tries to adjust to reality and is desperate to go back to the upper-class world while taking jabs at Chili and those she feels are beneath her. Blanchett and Hawkins have great chemistry together as two sisters who care for each other but it’s a relationship that is also dysfunctional as Hawkins tries to defend her lifestyle while Blanchett would be critical where it would have some very big revelations about Jasmine and her own life.

Blue Jasmine is a remarkable film from Woody Allen thanks in part to Cate Blanchett’s leading performance as well as a sensational supporting performance from Sally Hawkins. Along with notable supporting work from Alec Baldwin, Andrew Dice Clay, Louis C.K., and Bobby Cannavale. It’s a film that explores the very complex yet chaotic relationship between two sisters as well as one woman facing the reality when the life that she once had turns out to be a façade. In the end, Blue Jasmine is a phenomenal film from Woody Allen.

What do you think of Cate Blanchett's oscar chances ? Nearly everyone is raving about her performance. Maybe Sally Hawkins has a shot at a nomination too.
Oh, and congrats on completing Woody Allen's filmography!

I really liked your review and how you explained the framing of Jasmine in her relation to other people on screen. I think Blanchett's chances of getting an Oscar nom are big, but not sure about the win just yet. Great insightful review

@Chris-I think Cate Blanchett's chance for an Oscar nomination is pretty good but I really hope Sally Hawkins gets a nomination as I think her performance has that much importance.

@The Vern-Thanks. It was something I noticed when I watch the film in how Allen would often put Blanchett at the edge of the frame which I think is key to the film's brilliance. I think Allen is going to get another nomination for Best Original Screenplay.

Great review Steven! Woody Allen is a hit and miss for me but I'd watch this just for Cate Blanchett as she's just brilliant in everything. I quite like the premise of this one, too. I'll be sure to rent this as I missed the press screening.

@ruth-This is one of Allen's better films thanks in large part to its cast and story. It has some humor but also a lot of drama as Cate Blanchett just elevates the film. I can't think of a bad performance that she's done. She's just fantastic.

Good point about how they framed Jasmine in some of her scenes. It's the kind of thing that my conscious mind doesn't always notice right away, but I realize afterwards. Nice review!

@Erik-It was something that I was noticing in the film as I became aware of what Allen was doing. It felt true to what was happening to Jasmine as she's becoming more and more detached as the film went along. As disgusting and narcissistic as she can be, I pitied her.