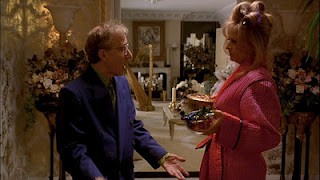 Written, directed, and starring Woody Allen, Small Time Crooks is the story about a criminal who wants to rob a bank with some friends only to learn that his wife’s cookie-selling venture has gone well as they deal with their newfound wealth. The film is a return of sorts to Allen’s more comedic films of the early 1970s as well as exploring the world of crime and the downsides of being wealthy. Also starring Tracey Ullman, Hugh Grant, Elaine May, Michael Rapaport, Elaine Stritch, Jon Lovitz, and Larry Pine. Small Time Crooks is a very funny film from Woody Allen.

The film revolves around a former criminal eager to rob a bank with some friends by buying an old pizza place as a cookie shop as a front while they try to rob the bank. Instead, the cookie shop becomes a success forcing the man to give up a life of crime yet he has a hard time dealing with being wealthy while his wife befriends an art dealer who teaches her the etiquette of being rich. It’s a film about the simple things in life but also the drawbacks of being rich where there’s an expectation to conform to the world of the rich. For this man’s wife whose gift in making cookies has made them rich, it gives her the chance to feel like she belongs to something unaware that the rich is also filled with people who are as shady as the poor.

Woody Allen’s screenplay is filled with a lot of humor as the character that he plays in Ray is someone who has had a past as a criminal but couldn’t deal with just being a dishwasher who is making scraps. With this new scheme he wants to do with some friends of his, he decides to find a way to steal some money for himself and his friends where he and his wife Frenchy (Tracey Ullman) can retire to Florida. With Frenchy’s talents in making cookies as a front for the real scheme, things go wrong except for Frenchy’s cookies that makes Ray and his friends rich as it becomes a major business. That’s what happens in the first act as the second act is about Ray’s difficulty with being rich while Frenchy conforms to that world leading to a third act that plays into revelations about the world of the rich and why wealth can be so fleeting. Though it’s a predictable scenario, Allen does infuse a lot of humor and charm into the story.

Allen’s direction is quite straightforward in terms of compositions as he doesn’t really do anything new but still add a sense of liveliness to the comedy. Notably the scene where Ray and his friends try to create a tunnel to dig into the bank where everything goes wrong. There’s a lot of craziness that Allen puts in for many scenes in the film including a dinner party where Ray is talking to people about things with Tequila being played in the background while Frenchy is having dinner with a couple of men with classical music playing in the background. With many of the scenes in the film set in New York City including a very funny sequence about Ray and Frenchy’s rise to success, it plays to how dim some of these characters are about handling a rising corporate business but it’s done in a pretty funny way. Overall, Allen creates a very delightful comedy about crime and the drawbacks of being rich.

Cinematographer Zhao Fei does excellent work with the film‘s very colorful cinematography from the look of the New York City exteriors in day and night to some of the lighting schemes for some of the film’s interiors. Editor Alisa Lepselter does nice work with the editing from the presentation of the TV interview Ray and Frenchy have to a montage of the diverging lives between Ray and French. Production designer Santo Loquasto, with set decorator Jessica Lanier and art director Tom Warren, does fantastic work with some of the set pieces including the posh penthouse apartment that Ray and Frenchy live in that plays to some of the cheesy taste that Frenchy has.

Costume designer Suzanne McCabe does terrific work with the costumes from the colorful clothes that Frenchy wear to the more simple clothing of Ray and his friends. Sound editor Robert Hein does superb work with the sound from the mixing in the way the robbery plans try to go out while Frenchy is selling cookies. The film’s wonderful soundtrack includes an array of jazz and classical pieces from artists like Johann Strauss, Hal Kemp, Benny Goodman, Sergei Rachmaninoff, Johann Sebastian Bach, and the Champs.

The casting by Laura Rosenthal and Juliet Taylor is brilliant for the ensemble that is created as it includes appearances from Larry Pine and Kristine Nielsen as a rich couple Frenchy invites to her dinner party, Douglas McGrath as a lawyer Frenchy meets late in the film, Elaine Stritch as a rich socialite Ray tries to steal from late in the film, and as Ray’s friends who help him with the botched heist, there’s Michael Rapaport, Jon Lovitz, and Tony Darrow as they each bring in some very funny moments to the film. Hugh Grant is excellent as the very cultured arts dealer David who woos Frenchy with his knowledge on the arts and such.

Elaine May is amazing as Frenchy’s dim-witted cousin May as she says some very funny things while putting herself in situations that just ups the humor. Tracey Ullman is wonderful as Frenchy as a woman who has a hard time dealing with Ray’s schemes until she becomes a rich woman eager to be part of the rich world. Woody Allen is superb as the bumbling Ray where Allen brings in a lot of wit and humor to a role as a man trying to deal with wealth while wanting the more simple pleasures of life.

Small Time Crooks is a terrific film from Woody Allen that features wonderful performances from Allen, Tracey Ullman, Hugh Grant, and Elaine May. While it might be a minor comedy from Allen, it’s still a very funny film that is full of lively moments that keeps the audience entertained. In the end, Small Time Crooks is a fantastic film from Woody Allen.

The twist in the middle messes with a lot of people, but it worked better for me. It gets to Woody's point about how money doesn't buy happiness, just snobbishness. Nothing spectacular, but it's nice to see something slightly positive come from Woody. Good review bud.

Thank you. I'm in the minority about this film but I enjoyed it because it was funny and had something to say about the downsides of being rich.

I would love to have lots of money but I'm not interesting in flaunting it or get a bunch of rich snobs as friends. I'm a guy with simple tastes (except w/ films and art) and I don't really want much. Plus, I would give money to those that really needs it.