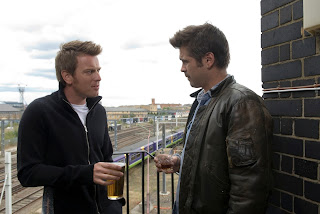 Written and directed by Woody Allen, Cassandra’s Dream is the story of two brothers who help their businessman uncle in conspiring to kill a business associate in the hopes that they can wipe off their debts. The film explores the world of greed and guilt involving two brothers and their family as well as what they want in life. Starring Ewan McGregor, Colin Farrell, Hayley Atwell, Sally Hawkins, Phil Davis, and Tom Wilkinson. Cassandra’s Dream is an interesting but very predictable suspense-drama from Woody Allen.

The film’s premise is quite simple where two brothers who both have aspirations for certain things find themselves in debt as they turn to their rich businessman uncle for help. Yet, their uncle needs their help to kill a business associate who is charging him with financial conspiracy as the two brothers make the reluctant decision to help their uncles so he can wipe off their debts and help them in their future. They do the job but guilt eventually consumes one of the brothers as it would later create all sorts of problems about everything for the family and those closest to them. It is a film about guilt and temptation where two brothers get the chance to find a way that will help them get a better future but it would be at the cost of their own souls.

While Woody Allen creates a very interesting premise, the outcome of the story ends up being very predictable in which the film loses not just some suspense but also goes heavy into drama in the third act. Though it’s understandable why Allen would go more dramatic in the third act, it gets a little overboard where it would play into some key decisions into what should be done. Particularly with the character of Terry (Colin Farrell) who is the most reluctant to be involved with the scheme as he owes more 90 grand in gambling debts and just bought a new flat for himself and his girlfriend Kate (Sally Hawkins). While his older brother Ian (Ewan McGregor) is also resistant about doing the job, he needs it more as he just got a new girlfriend in an actress named Angela (Hayley Atwell) as well as a chance to invest in posh hotels in California. Still, the actions that they did for their uncle Howard (Tom Wilkinson) would play into the different reactions as it raises all sorts of questions.

Allen’s direction is quite straightforward in terms of its presentation and compositions while he does have some very intense moments such as the eventual assassination scene that is filled with some intricate tracking shots and such. Yet, Allen doesn’t inject a lot of meat into the suspense where he doesn’t do enough to make the action be unpredictable while the drama does get a big heavy-handed in scenes where it involves the idea of family although not everyone in a family can be trusted. Notably in the third act where Terry starts to fall apart prompting Ian and Howard to discuss what should be done as its climax is quite dramatic as well as tragic. While the film does have a nice premise and comments about greed, guilt, and family, it is an unfortunately disappointing drama from Woody Allen.

Cinematographer Vilmos Zsigmond does excellent work with the film‘s cinematography as it‘s mostly straightforward for many of its exterior settings along with some low-key lights for some of the scenes at night including a break-in scene. Editor Alisa Lepselter does nice work with the editing to create a few montages to play up Ian‘s rise but also to play out some of the suspense in the assassination sequence. Production designer Maria Djurkovic, with set decorator Tatiana McDonald and art director Nick Palmer, does terrific work with the set pieces from the places Terry and Ian live in to some of the parties they go to.

Costume designer Jill Taylor does wonderful work with the costumes to play up Terry‘s working class look as well as the more livelier clothing of Kate and Angela. Sound editor Robert Hein does brilliant work with the sound to play up some of the suspense as well as scene in the third act which plays to Terry‘s guilt. The film’s music by Philip Glass is pretty good for its ominous orchestral score though it gets used in moments where it would play into a suspenseful moment that makes it too predictable at times.

The casting by Juliet Taylor, Gail Stevens, and Patricia Kerrigan DiCerto is superb for the ensemble that is created as it includes some notable small performances from Ashley Madekwe as a date of Ian’s early in the film, John Benfield and Claire Higgins as Ian and Terry’s parents, and Phil Davis as the man Howard wants killed in Martin Burns. Sally Hawkins is wonderful as Terry’s girlfriend Kate who becomes concerned about his behavior while Hayley Atwell is terrific as Ian’s actress girlfriend Angela who is eager to get Ian’s help to boost her career.

Tom Wilkinson is excellent as Terry and Ian’s uncle Howard who offers to clean their debts and more if they take part in an assassination plot where Wilkinson brings a real slimy approach to his character that is manipulative and cunning. Finally, there’s Ewan McGregor and Colin Farrell in amazing performances in their respective roles as Ian and Terry. McGregor brings an energy as a man eager to succeed on his own terms and get what he wants while he later deals with Terry’s moodiness. Farrell displays some restraint to his role as a troubled gambler who finds himself dealing with a guilty conscience as he becomes confused and upset over his actions. Despite some of the heavy-hand parts of the script in the third act, McGregor and Farrell do create some amazing chemistry as two brothers trying to sort their problems but in the wrong way.

Cassandra’s Dream is a very dour and unexciting film from Woody Allen despite the performances of Ewan McGregor, Colin Farrell, and Tom Wilkinson. While it has an intriguing premise on greed, guilt, and family, it is bogged down by its lack of suspense and not enough meat to make the drama more compelling. In the end, Cassandra’s Dream is a decent but underwhelming film from Woody Allen.

I thought the film was good, definitely better than some of the recent ones from Allen. Nice thriller and McGregor was awesome, Farrel was a bit lost and the amount of times he used the phrase "we can't do it" kept making me laugh.

It has its moments and I like the cast but I was a bit underwhelmed by the suspense since I knew what was going to happen and I wanted more meat in that.

The suspense in this movie is barely even here. The cats tries with what they can, but everybody just feels awkward. I get why Woody was trying to go back to his Match Point look and feel, but it felt like a total misfire. A rare one in the career of Woody Allen. Nice review man.

@Dan O-I think it could've been much worse but the cast did what they could to keep it a total disaster despite the shortcomings of the script.