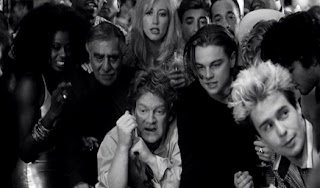 Written and directed by Woody Allen, Celebrity is the story about a divorcing couple that both take on two different paths of their lives where both find themselves immersing into the world of celebrity culture. The film is an exploration into that world where two people go into different paths to see what will happen after this encounter with this world. Starring Kenneth Branagh, Judy Davis, Leonardo diCaprio, Charlize Theron, Hank Azaria, Winona Ryder, Joe Mantegna, Melanie Griffith, Bebe Neuwirth, and Michael Lerner. Celebrity is a stylish though very messy film from Woody Allen.

The film explores the world of a divorced couple who both go into very different paths outside of their marriage. Lee Simon (Kenneth Branagh) was a travel writer who turns into a celebrity journalist as he ventures into the world celebrity culture while trying to work on a novel in the hopes to gain a career as a writer. For his insecure ex-wife Robin (Judy Davis), she quits being a schoolteacher as she tries to find a new place in life where she eventually works for a TV producer named Tony Gardella (Joe Mantegna) as she falls for him. The paths these two would take would have not just some major impact in their personal lives but also the path they would both take in this messy world of film premieres, parties, theaters, gatherings, and all sorts of thing in that world that is celebrity culture.

While it’s an interesting concept, Woody Allen’s screenplay unfortunately loses some of its luster in the second act where not only does the journeys of Lee and Robin become repetitive but their neuroses would also play into their troubles as that would become grating to watch. The script’s narrative does move back-and-forth into the different storylines of Lee and Robin in the paths they take though their storylines would coincide in brief moments. Most of it would play into their dramatic development over their split as those moments are told in flashbacks such as Lee’s decision to end the marriage and why did he did he decide to pursue a career in writing in his 40s after attending his high school reunion. A lot of the first act is interesting but it loses some steam in the second while it does have an interesting third act to see the outcome of the paths they took.

Allen’s direction is quite stylish as he aims for something that is timeless in its black-and-white photography as it would recalls some of his early films from the 1980s. Notably in the compositions and camera movements that he creates as it has this amazing opening of a plane writing the word “help” in the sky for a film. While many of Allen’s compositions are gorgeous, some of the humor doesn’t seem to work as it relies too much on characters acting awkward to their situations where the comedy feels a bit forced instead of natural. At the same time, the situations that occur starts to wear thin to the point that the outcome is sort of predictable. Overall, Allen creates a film that has an interesting concept but loses steam due to its predictability and over-emphasis on neurotic characters in a culture they know little about.

Cinematographer Sven Nykvist does amazing work with the film‘s gorgeous black-and-white photography that has this air of style in its look that is timeless as well as playing to some of air of pretentiousness that is common with art films. Editor Susan E. Morse does nice work with the editing in the way the story is structured as well as a few moments in the film‘s drama. Production designer Santo Loquasto, with set decorator Susan Kaufman and art director Tom Warren, do terrific work with the set pieces from the look of the runways and parties to the home of Lee.

Costume designer Suzy Benzinger does wonderful work with the costumes from the many stylish clothes of the models and the young people that Lee hangs around with to the more loose clothing of Robin early in the film. Sound editor Robert Hein does excellent work with the sound from the atmosphere of the party scenes to the intimate moments in the apartment and such. The film’s soundtrack consists of classical and jazz music from the Dave Brubeck Quartet, Ludwig Van Beethoven, Billie Holliday, Stan Getz, the Gershwin Brothers, and Richard Wagner to play up the world of that culture to give the film a romantic feel.

The casting by Laura Rosenthal and Juliet Taylor is brilliant for the ensemble that is created as well as the cameos that are made as it includes appearances from Donald Trump, supermodels Frederique and Roshumba, filmmaker Greg Mottola as a director in the film’s opening sequence, Andre Gregory as an art house filmmaker, Karen Duffy and Debra Messing as TV reporters, J.K. Simmons as a souvenir salesman, Alison Janney and Celia Weston as socialites, Tony Sirico as a mob guy who is supposed to appear on a TV show, Isaac Mizrahi as an artist, Jeffrey Wright as an off-Broadway theater director, Sam Rockwell and Adrian Grenier as entourage guys for actor Brandon Darrow, Gretchen Mol as Darrow’s girlfriend, David Marguiles as an alderman, Kate Burton as Robin’s friend Cheryl, Dylan Baker as a Catholic retreat priest, Douglas McGrath as a novelist, Larry Pine as a publisher, Aida Turturro as a fortune teller, and Hank Azaria as a date of an aspiring actress named Nola.

Bebe Neuwirth is excellent as a famed prostitute named Nina who teaches Robin how to pleasure someone sexually while Michael Lerner is funny as a famed plastic surgeon named Dr. Lupus. Famke Janssen is terrific as the publisher Bonnie whom Lee dates while Melanie Griffith is very good as the actress Nicole Oliver whom Lee hangs out with early in the film. Winona Ryder is superb as the aspiring actress Nola whom Lee falls for while Charlize Theron is amazing as a supermodel Lee hangs out with as they get into some trouble. Leonardo DiCaprio is great as the young actor Brandon Darrow as he displays all of the traits of a bad boy actor. Joe Mantegna is wonderful as TV producer Tony Gardella whom Robin falls for as he becomes the guy that can help her.

Judy Davis is fantastic as Robin as a former English schoolteacher whose life worsens following her divorce with Lee as she becomes more insecure and neurotic as she tries to figure out what to do with her life while meeting Tony as Davis brings some humor and dramatic weight despite some of the repetitiveness of her character. Finally, there’s Kenneth Branagh in an absolutely horrible performance as Lee. Branagh can do comedy but in trying to impersonate the personas that Woody Allen has played in his many films just doesn’t work. It comes off as a very bad impression of Allen where the awkwardness feels forced while Branagh doesn’t do enough to make his character sympathetic as he ends up being a real scumbag.

Celebrity is a really terrible film from Woody Allen. Despite a remarkable performance from Judy Davis as well as wonderful ensemble, the film is hampered by its messy storyline as well as Kenneth Branagh’s poor leading performance. While there’s moments in the film that are very engaging that includes Sven Nykvist’s cinematography, the overall results are just very disappointing. In the end, Celebrity is just a dreadful film from Woody Allen.

Man, I honestly can't think of too many straight bash reviews I've read on your site. Sadly, I agree with everything you said here. Really a bad, bad film.

I don't watch a lot of bad movies because either I have little or no time to watch them or I'm just too careful because I want to watch a good film.

This one definitely sucked. I love Sven Nykvist's photography but it just didn't work for me as a whole and Kenneth Branagh was just horrific in this film but not as bad as Jason Biggs in Anything Else.

The next part of the Auteurs series on Allen is going to be released next Friday as I've got five more films to do and after I finish the fourth part. I'm taking a fucking one-week vacation.