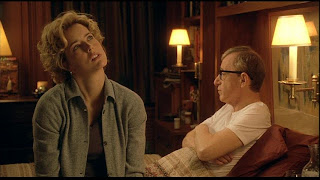 Written, directed, and starring Woody Allen, Hollywood Ending is the story of a once-revered filmmaker who is given a chance to make a comeback by directing a film for a studio to succumb to hysterical blindness due to the pressures he’s facing. The film explores the world of Hollywood where a filmmaker tries to make the best film he can studio executives put intense pressure to make the film their way. Also starring Tea Leoni, George Hamilton, Debra Messing, Mark Rydell, Tiffani Thiessen, and Treat Williams. Hollywood Ending is a wild though troubled film from Woody Allen.

The film is about this prestigious filmmaker whose career has definitely gone down as he’s now being hired to direct commercials. When his ex-wife decides to have him direct a $60 million picture in the hopes that he can make a comeback, he reluctantly agrees to the job only to suddenly go blind just before shooting begins. With the help of his ex-wife, his agent, and a Chinese translator, they all try to hide the secret to ensure that things go as planned. It’s a very strange premise for a film as it explores the world of Hollywood filmmaking and how things can go wrong yet it is told with a sense of silliness. While it does have an interesting concept with the humor being about this filmmaker going blind but the jokes definitely a get repetitive while it later becomes a drama in the third act making the film uneven.

Woody Allen’s direction is very lively at times while he does bring in some pretty realistic ideas about what goes on in the film industry. Particularly as it’s often run by studios where a studio head is eager to make sure things don’t go wrong. Still, Allen goes for a somewhat slapstick approach to the comedy where blindness plot device does manage to work out though it does get a bit repetitive to the point that it loses some luster. Even in some scenes where Allen’s Val Waxman is often arguing to his ex-wife about how their relationship fell apart as it kind of goes on and on. Overall, Allen creates a decent but incoherent film about a filmmaker dealing with the pressures to make a comeback.

Cinematographer Wedigo von Schultzendorff does excellent work with the film‘s cinematography from the look of the New York City locations to the look of the sets inside the studio. Editor Alisa Lepselter does OK work with the editing as some of the cutting is straightforward though a few of its montages and jump-cuts do drag out the humorless scenes. Production designer Santo Loquasto, with set decorator Regina Graves and art director Tom Warren, does amazing work with the look of the sets that are built for the making of the film to play up the sense of incoherency the crew are dealing with.

Costume designer Melissa Toth does nice work with the costumes where everyone looks casual with the exception of the actors wearing 1940s clothes for the film while Val‘s girlfriend wears more stylish, sexier clothing. Sound editor Robert Hein does terrific work with the sound to capture the chaos of what goes on during filming to display some of Val’s unconventional approach to directing while being blind. The film’s wonderful soundtrack includes songs by Bing Crosby, Edmond Hall, Jackie Gleason, Benny Goodman, Barbara Carroll, Tito Puente, and a song by the metal band White Zombie in a scene where Val meets his estranged son.

The casting by Laura Rosenthal and Juliet Taylor is superb as it features appearances from Isaac Mizrahi and Fred Melamed as two art directors that Val hires in different stages of the production, Greg Mottola as an assistant director, Erica Leerhsen and Aaron Stanford as actors in the film, Mark Webber as Val’s estranged punk-rocker son, Marian Seldes as the costume designer, Barney Cheng as a translator who works closely with Val, Lu Yu as the Chinese cinematographer Val hires, Peter Gerety as Val’s psychiatrist who tries to figure out his blindness, and Tiffani Thiessen as the actress Sharon Bates who tries to seduce Val. Jodie Markell is very good as the journalist Andrea who tries to cover everything that goes on during production while George Hamilton is OK as one of the film’s producers.

Mark Rydell is wonderful as Val’s longtime agent Al who is the first to discover the blindness as he tries to help him out. Treat Williams is excellent as the studio head and Ellie’s fiancée Hal whom Val dislikes as he’s wondering what’s going on. Debra Messing is fine as Val’s dim-witted wannabe-actress girlfriend Lori as Messing tries to be very funny and be bad though it’s sometimes very painful to watch. Tea Leoni is amazing as Val’s ex-wife and producer Ellie who reluctantly hires Val to direct the film because she hopes to revive his career until realizing what’s happening to him as she tries to help him. Finally, there’s Woody Allen in a terrific performance as Val Wexler as Allen brings a great physicality to the way he plays blind with such restraint though some of the humorous he brings where he rambles does get old at times as he does have some nice chemistry with Leoni.

I agree, a somewhat interesting film that has some interesting things to say about Hollywood. But all in all, it doesn't really amount to much.

Yeah, there were stuff I enjoyed and I wish there was more satire in the film but it was sort of messy in the end. Plus, how bad was that movie Allen's character was making?

I think Hollywood Ending is my least favorite Woody Allen movie. I can see what he was trying to do, but it was one of the few movies from Allen that felt like a mess and lost me.

@Dan Heaton-I agree that it's one of his duds as it's one of my least favorites at the moment but it's not as bad as Anything Else which I think is Allen's worst film.