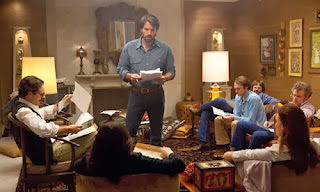 Based on the book The Master of Disguise by Tony Mendez and Joshuah Bearman’s article The Great Escape, Argo is the story of a CIA operative who leads a rescue of six American diplomats who are hiding at the home of a Canadian ambassador during the 1979 Iranian Revolution. Directed by Ben Affleck and screenplay by Chris Terrio, the film is about how a CIA operative, a Hollywood makeup artist, and a film producer create a fake movie in order to use it as a disguise to get Americans out of Iran during a tumultuous period. Starring Ben Affleck, Bryan Cranston, Alan Arkin, and John Goodman. Argo is a thrilling yet engaging film from Ben Affleck.

Set during the Iranian Revolution of 1979 where the people of Iran took over the American embassy and held many Americans hostage for 444 days. The film is about six American diplomats who were able to escape during the fall of the embassy where they hid at the home of the Canadian ambassador. It would take the actions of a CIA operative in Tony Mendez (Ben Affleck) who decides to create a fake movie with help of a famed makeup artist John Chambers (John Goodman) and film producer Lester Siegel (Alan Arkin). There, Mendez would create a ruse so that he would get the six Americans out of the country though they’re aware that they’re under surveillance from the Iranian government. It’s a film that plays into this true story that is known as Canadian Caper though there are things that screenwriter Chris Terrio does to play with some of the true events in order to make the story more dramatic.

Despite some of the dramatic liberties that was taken to tell the story, Terrio does manage to make the screenplay not just be some suspense film about getting six Americans out of Iran by having them pretend to be a Canadian film crew. There’s also some humor about how Mendez goes into Hollywood to try and find a story to sell to the Iranian government as if it would be a movie that the country would approve. They would find it in the form of a cheesy sci-fi adventure called Argo where the film’s title would have a certain punch line that is often said “Argo fuck yourself”. It’s among one of the highlights of the film that helps balance a lot of the suspense and intrigue that goes on where the narrative has a straightforward structure where it moves back-and-forth to Mendez’ time in Istanbul and Iran as well as what is happening in Washington D.C.

The script doesn’t just succeed in its narrative and approach to suspense but also in the characters themselves as Tony Mendez is this CIA operative who knows a lot more than some of his superiors about how to get people out as he is also someone with a wife and son whom he doesn’t see often but always talks to. When he presents his ideas to his superiors, they’re skeptical but realize there’s very little options as the people he’s trying to get out of the country are also wary of Mendez’s idea. Even as there’s people in the American embassy trying to find pictures of the missing six through hordes of shredded paper while there’s an Iranian maid named Sahar (Sheila Vand) who is suspicious about them as she works for the Canadian ambassador Ken Taylor (Victor Garber). Still, it all plays to the fact that these Americans have to pretend to be Canadians and play that part before the Iranian government find out about their true identities.

Ben Affleck’s direction is quite straightforward for much of the presentation though he opens the film with a comic-book like presentation about Iran’s troubled history with the U.S. that led to the 1979 Iranian Revolution with a mixture of old news footage and pictures of these times. Notably as he also mixes footage of the embassy takeover on that day with what is happening inside as it becomes chaotic as the film then shifts into Mendez coming into the picture when the CIA is running out of options as Affleck maintains something is quite engaging intense where the camera is constantly moving in its tracking and handheld shots to present the CIA in panic mode as they’re trying to figure things out. Affleck does lighten things up for the scenes in Hollywood where he isn’t afraid to add humor and silliness to the story while he creates a very strange montage where it showcases the uprising in Iran with actors reading the script to the fake sci-fi story.

While much of the film is shot in Los Angeles with portions shot in Washington DC and in Istanbul as some of the locations in Los Angeles and Istanbul play the role of Tehran, Iran. Affleck does create some shot-for-shot recreations of some of the events that took place during the Iranian Revolution of 1979 where some of those images are terrifying. Notably as Affleck maintains an air of chills and claustrophobia to a scene where he and the American diplomats step outside to pretend to be the film crew where they nearly get into trouble. It adds to the suspense as well as the scenes that goes on in the American embassy where there’s other hostages as well as moments such as the failed Operation Eagle Claw mission that would complicate things until Mendez makes the decision that would impact everything. Overall, Affleck creates a very gripping yet powerful film about the Canadian Caper story.

Cinematographer Rodrigo Prieto does amazing work with the film‘s cinematography where it has an air of grain to create something real but also to add some style in some of the locations such as the scenes in Iran to play up that sense of terror. Editor William Goldenberg does brilliant work with the film‘s editing with its use of montages as well as rhythmic cuts to play into the film‘s suspense and terror as well as some of its humorous moments. Production designer Sharon Seymour, with set decorator Jan Pascale and art director Peter Borck, do fantastic work with the set pieces from the look of the embassy and the Canadian ambassador‘s home as well as the look of 1979 Tehran in its air of unrest.

Costume designer Jacqueline West does excellent work with the costumes where it‘s mostly low-key and casual to play up the look of late 1970s while creating some silly costumes for the film‘s sci-fi convention scene. Visual effects supervisors Lubo Hristov and Don Lee do terrific work with some of the visual look in the way Tehran looked from afar as well as some minimal background moments. Sound editors Erik Aadahl and Ethan Van der Ryn do superb work with the sound such as the film‘s embassy riot scene as well as the sense of terror that occurs with its sound of helicopters and angry crowds to play into that air of unrest. The film’s music by Alexandre Desplat is phenomenal for its orchestral-driven score to play into the film‘s suspense and drama while infusing it with some Middle Eastern vocal music and such while the film‘s soundtrack by music supervisor Linda Cohen features a lot of the music of that period from acts like the Rolling Stones, Dire Straits, Van Halen, and Led Zeppelin.

The casting by Lora Kennedy is just great for the cast that is assembled as it features some small appearances from Taylor Schilling as Tony’s wife Christine, Page Leong as Ken Taylor’s wife, Adrienne Barbeau as Siegel’s ex-wife, Chris Messina as the CIA official Malinov, Zeljko Ivanek as one of Mendez’s superiors in Robert Pender, Sheila Vand as the Taylors’ maid Sahar, Richard Kind as a Hollywood producer, Kyle Chandler as White House Chief of Staff Hamilton Jordan, Bob Gunton as Secretary of State Cyrus Vance, and Philip Baker Hall as the CIA head Stansfield Turner. Bryan Cranston is superb as Tony’s main superior Jack O’Donnell who helps ensure the secrecy of the mission as well as be his contact at home. Victor Garber is excellent as Canadian ambassador Ken Taylor who keeps the six Americans at his house while figuring out how to be quietly involved without causing troubles with the Iranians.

In the roles of the six American hostages, there’s Tate Donovan as Robert Anders, Rory Cochrane as Lee Schatz, Scoot McNairy and Kerry Bishe as Joe and Cathy Stafford, and Christopher Denham and Clea DuVall as Mark and Cora Lijek as they all give fantastic performances as six Americans living in terror. Alan Arkin is brilliant as the very engaging producer Lester Siegel who always knows how to talk bullshit to people in order to get what he wants as helps out Mendez. John Goodman is marvelous as the legendary makeup artist John Chambers who helps Mendez get the project started as it’s a performance full of humor and bravado. Finally, there’s Ben Affleck in a remarkable performance as Tony Mendez as a CIA operative who is keen on making sure that he gets the Americans out of Iran while dealing with the chaos in the country as well as the fact that he is also putting his ass on the line as well.

Argo is an incredible film from Ben Affleck about the Canadian Caper rescue. Thanks to a great ensemble cast that includes Bryan Cranston, Alan Arkin, and John Goodman as well a captivating story about what happened. It is a film that is certainly a small piece of American history that is well-told while giving some credit to what the Canadians did despite some skimming over some details in the true accounts of what happened. In the end, Argo is an extraordinary film from Ben Affleck.

Good review Steve. There was no doubt in my mind about this being a very good flick. However, the last ten or so minutes felt incredibly drawn-out and manipulative for the sake of being so. Then again, I guess Big Ben sort of had to do that, because without it, we wouldn't have had an Oscar-winner on our hands, now would we?

Splendid thorough review, Steven! I rooted for this film and was so glad it won! This story could've been so tedious under lesser talents but Affleck did a great job. It's intense but humorous as well, all in all it's an enjoyable film I wouldn't mind seeing again.

@Dan O.-I sort of disagree with your view on the last 10 minutes though I can see why people had issues with it. I didn't as I thought it helped the story as well as the fact that it had to be classified.

@ruth-In lesser hands, the film didn't work but I'm glad Affleck was able to make it engaging enough. I have no problems with the fact that this film won the Best Picture Oscar. It was just that there were a bunch of films that year that didn't get nominated that I thought were much better.