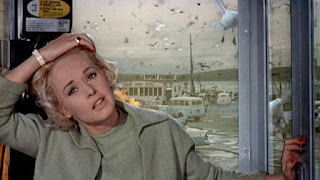 Based on a story by Daphne du Maurier, The Birds is the story of a woman arrives into a small town where she encounters a series of violent attacks by birds all over the town as she tries to survive with a few locals. Directed by Alfred Hitchcock and screenplay by Evan Peters, the film is a simple story of a woman dealing with an epidemic of violent birds roaming around a small town killing anyone that comes across them. Starring Tippi Hedren, Rod Taylor, Suzanne Pleshette, Jessica Tandy, and Veronica Cartwright. The Birds is a chilling yet intoxicating film from Alfred Hitchcock.

The film is the simple story about a playgirl who arrives from San Francisco to a small Californian town by a bay to deliver lovebirds to a man she met a day ago as a gift for his sister. Upon arriving to the town, she notices that a lot of birds ranging from crows, sparrows, and seagulls have been roaming where they would eventually attack her and the town. It’s a film that explores this woman from the city who comes to the small town where her arrival might’ve caused this strange plague of birds attacking the town including children where no one is safe.

Evan Peters’ screenplay is very simple in its premise as Melanie Daniels (Tippi Hedren) is just this socialite who spends her time at a bird shop where she decides to give a present of two lovebirds to a man’s sister just so she can meet him. Instead, trouble emerges where she is attacked by a seagull and then it slowly builds up in these attacks. While Melanie tries to court Mitch Brenner (Rod Taylor) though she is warned by a former lover of his in Annie Hayworth (Suzanne Pleshette) about his very clingy mother Lydia (Jessica Tandy). All of that is put aside when Melanie and Mitch try to deal with this plague of birds that his 11-year old sister Cathy (Veronica Cartwright) encounter. With the plague intensifying, Melanie becomes accused by the locals for what has happened when there are really no explanations into what caused all of this.

Alfred Hitchcock’s direction is very stylish in not just the way he creates the sense of terror and suspense but also finds way to slow things down to go for a simple presentation. Notably as the film starts off very calmly with these simple scenes set in San Francisco and on the California freeway while Hitchcock does employ some style with some artificial backdrops to play into a sense of fantasy that Melanie and Mitch want. Even as it would create this mixture of fantasy and horror from the moment Melanie is first attacked by a seagull. Many of the compositions that Hitchcock create are very stylish from the way he puts actors in a frame where one character is in the background while another is in front of the camera.

The sense of terror that Hitchcock creates when it comes to the sequences of birds attacking has this energy that is just thrilling while some of the visual effects were quite primitive. Still, he manages to convey that sense of horror that is happening while using the rhythms of suspense to help prepare for what is coming next. Even as it includes this very chilling sequence where the birds attack the town as the editing and sound work just add to that sense of terror until it ends where Hitchcock’s compositions become very direct over what Melanie is facing. Hitchcock also uses some slanted shots to play into the terror while knowing that it would maintain that air of suspense as well as what might happen. Even as the film’s ending that is presented with such style which shows the ability of Hitchcock’s gift as an artist as the result is a truly hypnotic yet terrifying film about a plague of birds.

Cinematographer Robert Burks does brilliant work with the film‘s very colorful cinematography with its look of the daytime exteriors to the use of lights for the interior scenes at night as well as some of the exteriors in the evening and morning. Editor George Tomasini does amazing work with the editing with its use of stylish cuts to play into the suspense and terror while knowing when to slow things down for the drama in order to maintain that air of suspense. Production designer Robert F. Boyle and set decorator George Milo do excellent work with the set pieces such as the home of the Brenners to some of the other places in the small town including rooms where dead birds are already in that room. Costume designer Edith Head does wonderful work with the green dress that Melanie wears throughout the film to showcase her personality and how different she is from everyone else.

Hair stylist Virginia Darcy and makeup artist Howard Smit do nice work with the look of Melanie as well as some of the makeup for the cuts the characters have when they‘re attacked. The visual effects work of Bob Broughton, along with photographic effects by Ub Iwerks, is terrific with its use of animations and backdrops to play into that world of terror. The sound work of Remi Gassmann, Oskar Sala, and music composer Bernard Herrmann is just phenomenal with the way the birds sound to build up that suspense as it is filled with layers where it is a crucial element to the film.

The film’s marvelous cast includes some notable small roles from Karl Swenson as a drunk at the restaurant who claims the world is going to end, Malcolm Attenbury as the local deputy who is ignorant about these birds attack until they’re actually happening, Doreen Lang as a hysterical woman who accuses Melanie of bringing this plague, and Ethel Griffies as an amateur bird expert who doesn’t believe anything that is happening until the birds actually attack. Suzanne Pleshette is excellent as the local schoolteacher Annie Hayworth who is a former lover of Mitch as she befriends Melanie while telling her about why Lydia is quite distant and cold early in the film. Veronica Cartwright is wonderful as Mitch’s 11-year old sister Cathy who deals with the terror that she faces as she starts to get close towards Melanie.

Jessica Tandy is amazing as Mitch and Cathy’s mother Lydia who is wary at first towards Melanie until she encounters some horror about the birds as she and Melanie become close. Rod Taylor is brilliant as Mitch as this charming man who meets Melanie in San Francisco as he is surprised by her appearance while helping her deal with the chaos of the birds. Finally, there’s Tippi Hedren in a remarkable performance as Melanie Daniels as this socialite who drives from San Francisco to this small port town where she deals with this plague of birds where Hedren has this beauty as well as drive as a woman trying to make sense while helping those whom she becomes close to.

It's been a while since I saw this but I remember being so terrified of it! I could see why this film is so iconic.

I'm still waiting for my friend to do a guest post on this as he went to some of the filming locations this past Summer.

I saw this film for Halloween as I wanted to see something scary. Man, it still holds up as I watched it on the big HD TV and it looks great. My mother, who hadn't seen the film in years, watched the last 30 minutes with me and she couldn't believe how good it looked and the fact that it still scared her. Goes to show the power of an artist like Hitchcock.

Excellent review. I haven't seen all of Hitchcock's work, so I can't say for certain, but I think this might be my favorite of his movies. Like you said, all of the film's elements add to making something mundane entirely creepy.

@jjames36-I haven't seen a lot of Hitchcock's films either as I really want to explore more. Hopefully next year as I like what he does.