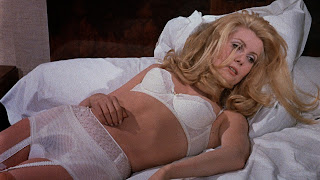 Based on the novel by Joseph Kessel, Belle de Jour is the story of a housewife who spends her afternoons as a prostitute while her husband is at work as she deals with her sexual desires. Directed by Luis Bunuel and screenplay by Bunuel and Jean-Claude Carriere, the film is an exploration into a woman trying to find sexual fulfillment as she’s not finding that in her marriage prompting her to take drastic actions. Starring Catherine Deneuve, Jean Sorel, Francisco Rabal, and Michel Piccoli. Belle de Jour is a provocative yet entrancing film from Luis Bunuel.

The film explores the world of a bored housewife of a surgeon who decides to become a prostitute in the afternoons to fulfill her sexual desires. There, she encounters men who give her the sexual fulfillment she craves which would have an ironic effect in her relationship with her husband until she meets a troubled criminal who wants her. It’s a film that is largely told from the perspective of the protagonist Severine (Catherine Deneuve) who has these fantasies of being beaten and insulted yet has a hard time living that out in the real world as she is bored and aloof which confuses her husband Pierre (Jean Sorel) who often works. Yet, she is also quite cold to his friend Henri Husson (Michel Piccoli) who would mention about the brothel that one of Severine’s old friends used to work at which prompts the curious Severine to see what is there where she would find this strange balance of fantasy and reality.

The film’s screenplay by Luis Bunuel and Jean-Claude Carriere creates a unique story that is largely told from a woman’s perspective where it’s opening scene is where Severine and Pierre are riding in a carriage where Pierre demands the carriage drivers to beat her. It’s a very strange moment to open the film but the fact that it’s Severine’s fantasy makes it even stranger into why would this woman want to feel pleasure from being whipped by men and such? Pierre has no clue about Severine’s fantasies as he is also baffled by her reluctance to have sex with him but he respects her too much to not do anything against her will. Still, there is that question of maybe Severine wants Pierre to take action but it doesn’t happen where she also is also attracted to Husson in some respects though she also despises him greatly because of how flirtatious he can be.

The script is also intriguing in how Severine manages to be part of this world of sex where she works for this very stern brothel madam known as Madame Anais (Genevieve Page) who shows her the ropes of what to do. Under the name Belle de Jour, Severine would become one of class and intrigue to the clients she meets. Yet, it becomes more troubling in its third act with the arrival of a criminal named Hyppolite (Francisco Rabal) who is an old friend of Madame Anais as he is joined by his young protégé Marcel (Pierre Clementi) whose attraction to Severine is very unstable. Notably as it clashes with everything she wanted but also the stability that she craves for at home.

The direction of Luis Bunuel is very entrancing in the way he blurs the idea of fantasy and reality. Most notably with its opening sequence that seems real but it has an air of surrealism that is common with a lot of Bunuel’s work as there would be these scenes that are presented in some of the beautiful ways. Even as it has this degradation that makes it so strange where Husson throws mud at Severine in one scene while she’s tied up on a tree in another scene to showcase how extreme these fantasies of sadomasochism can be. Even where Severine finally gets to act in these fantasies where there is a sense of happiness that occurs where even the fantasies become more playful in some respects.

The compositions that Bunuel creates are mesmerizing in the way he puts his actors into a frame or how he maintains the idea of reality and fantasy colliding. Notably as some of the moments of reality where Severine interacts with the other prostitutes showcase an intimacy in some of these scenes as well as scenes between Severine and Pierre where it’s quite calm. Still, Bunuel does create some great scenes in these moments where he would also include moments of symbolism to suggest the fate that Severine might face. Most notably a sequence where Severine is hired to play the dead wife of a man in this elaborate yet strange funeral scene. Things get darker in the third act where her encounter with Marcel is one that is just chaotic as it also begins to blur the idea of reality and fantasy where Severine must make a choice. Overall, Bunuel creates a very fascinating and captivating film about a woman trying to find fulfillment in her sexual desires.

Cinematographer Sascha Vierny does amazing work with the film‘s very colorful cinematography from the way the scenes in the forests look with its vibrant colors to some of the lighting schemes that is created in some of the film‘s interiors. Editor Louisette Hautecoeur does brilliant work with the editing where it is stylized with its jump-cuts and dissolves as it plays to some of the film‘s humor and strange moments. Production designer Robert Clavel does fantastic work with the look of the brothel that Severine works at as well as her lavish home that she and Pierre live in. The costumes of Helene Nourry is superb for its sense of style in the clothes that Severine wears that ranges from quaint and innocent to some of the sensual clothing she has to wear for work. The sound work of Rene Longuet is excellent for some of the effects that is created to play up that blur of fantasy and reality as well as in creating an atmosphere in some big scenes in the film.

The film’s incredible cast includes some notable small roles from Marguerite Muni as Madame Anais’ maid, Georges Marchal as a duke who hires Severine to come to his home, Macha Merill as Severine’s friend Renee, Francoise Fabian and Maria Latour as a couple of women who work for Madame Anais, and Francisco Rabal as the notorious yet cautious criminal Hyppolite. Pierre Clementi is excellent as the unpredictable and fierce Marcel who falls for Severine as she has everything he wants yet has a hard time not being with her. Genevieve Page is superb as Madame Anais as a woman who is stern but also very kind as she helps Severine figure out how to play her part while dealing with the fact that Severine is only working in afternoons. Michel Piccoli is great as Henri Husson as a man who is attracted to Severine no matter how much she despises him as he’s one full of charm and wit while he would be the one that would play a key role into ending Severine’s time as a prostitute.

Jean Sorel is terrific as Severine’s husband Pierre as he’s sort of this aloof yet kind surgeon who loves his wife but doesn’t know what she wants as he’s quite oblivious to her activities while being a much more brutal person in her fantasies. Finally, there’s Catherine Deneuve in a remarkable performance as Severine as this woman who sort of has this cold yet lost personality early in the film to someone who seems to enjoy being beaten and humiliated in her fantasies as it’s definitely one of Deneuve’s finest performances in her career where she shows a bit of skin but also shows something much more in this film.

Belle de Jour is a phenomenal film from Luis Bunuel that features a radiant performance from Catherine Deneuve. The film is certainly one of the most interesting takes on the world of sexual fantasies and sadomasochism as well as what a woman wants in her life as she is just simply trying to find herself. Most notably as it would also play into the idea of reality and fantasy in what a woman wants. In the end, Belle de Jour is a sensational film from Luis Bunuel.

I didn't love this like I wanted to, and yet the acting is superb and a lot of the issues I take with the film (the coldness in particular) seem like assets upon reflection. I need to watch it again soon. Nice write up here :-D

Thank you. I can understand why people would have a hard time putting up with this but it is still a very provocative film that explore what a woman wants in her life.

Can't believe I haven't seen anything by Bunuel nor any film starring Catherine Deneuve! I remember my late mom once said she was like the most beautiful woman in the world and I concur! I should watch this one soon, great review Steven!

@ruth-OK, you really need to join the Blind Spot series for next year. I've got one more Bunuel film to watch for tomorrow and some more for next year. I would start with Viridiana or Un Chien Andalou.

As for Catherine Deneuve, start with Repulsion and The Umbrellas of Cherbourg. Then this film and just see what else is there as she's still bringing it.

I don't like Severine. She doesn't seem to have any regrets and has no responsibility for causing the husband to be paraplegic. She knew that she was wrong becoming a prostitute but she was selfish and she didn't care for anybody but herself. Trauma or no trauma

@John D.-You don't have to like her choices but it does play into something far more psychological into her desires but also her husband neglecting her.

Her husband does not neglect. On the contrary, she is the one who refuses to be intimate. He has been very patient and respected her choices. He can't understand why. He's even taken the blame for the situation. He suspects that there is somebody or something waiting for her in Paris. I could have easily found out and confronted her. She seems to love Marcel. It's apparent from the way she runs to see him when she's back from the 2 weeks vacation that she cuts in half because she wanted to see him. I don't understand why she likes that ugly tug. I know I'm carried away because it's fiction but I take my fiction very seriously......

@John D.-I'd take stories seriously but you have to remember that it's fiction. It's been years since I've seen the film. I'd need to watch it again though I don't think I have the time right now to see it again.