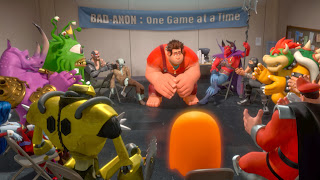 Directed by Rich Moore and screenplay by Phil Johnston and Jennifer Lee from a story by Moore, Johnston, and Jim Reardon with additional contributions by John C. Reilly, Sam J. Levine, and Jared Stern, Wreck-It Ralph is the story of a titular video game bad guy character who decides he doesn’t want to be the bad guy anymore by leaving his game in the hopes he can get a medal and earn the respect of the other characters from his game. The film explores the world of the arcade video games from the early 80s 8-bit games to the games of the 21st Century where a bad guy becomes the hero as he finds himself in different games and befriending a character who is considered a glitch. Featuring the voices of John C. Reilly, Sarah Silverman, Jack McBrayer, Jane Lynch, Alan Tudyk, Mindy Kaling, Joe Lo Truglio, Dennis Haysbert, and Ed O’Neill. Wreck-It Ralph is a sensational and astonishing film from Rich Moore.

The film is about the titular bad guy (John C. Reilly) whose job in the video game Fix-It-Felix Jr. as all he does is wreck a building while the game’s titular character (Jack McBrayer) fixes it. Ralph does the job for 30 years but feels unappreciated as he decides he doesn’t want to be the bad guy anymore and earn a medal in the hopes he can get respected. When Felix learns that Ralph went to a shooting game called Hero’s Duty to get a medal, he tries to stop him but other circumstances lands Ralph in the candy-based racing game Sugar Rush where he meets and help a young girl named Vanellope (Sarah Silverman) to be in the race despite the fact that she’s a glitch. Yet, there’s something that Ralph had brought that would threaten not just the game but also all of the games in the arcade as he and Felix have to stop it.

The film’s screenplay does have this traditional structure where the first act is about Ralph leaving Fix-It-Felix Jr. after feeling unappreciated by other characters in the game as he meets a character from Hero’s Duty where he learns about getting a medal until an encounter with a cy-bug causes trouble. When Ralph finds himself at Sugar Rush, he meets Vanellope who is this character that is a glitch as he is annoyed by her at first yet decides to help her so he can get his medal and she can become a character in the game. Still, Ralph and Vanellope have to deal with the character King Candy (Alan Tudyk) who believes that if Vanellope becomes part of the game. She will ruin it because she is a glitch and the game will be unplugged leaving all of the characters homeless like another legendary game character in Q*bert and his fellow villains.

The script succeeds in giving characters motivations and such to drive the story where Felix teams with Hero’s Duty character Sgt. Calhoun (Jane Lynch) to find Ralph as well as cy-bug that had entered Sugar Rush as it’s a creature that becomes whatever it eats and create chaos until someone lights a beacon to get rid of them. Felix falls for Sgt. Calhoun as he also tells her about a character named Turbo who was this popular racing game character who got jealous when a new racing game emerged where he hacked into the game and put that and his own game out of commission which adds to Felix’s motivation to get Ralph back in their game or they will be unplugged.

Rich Moore’s direction is dazzling not just in the way he presents the world of the arcade games but also for the fact that it’s set in an arcade where many characters meet at the plugging board to interact and be at other games after closing time at the arcade. Even the games themselves are set in a world that is unique where characters are seen drinking at Tapper’s where on the screen, some of the game characters are shown in high-definition or in 8-bit animated style. With the help of supervising animator Doug Bennett, Moore’s direction has these very broad and sprawling images where the animation also helps out in the look of the characters as Tapper and most of the minor characters in Fix-It-Felix Jr. all have this jerky look to their movements since they’re programmed in an 8-bit animated style.

The animation also features a lot of video game references where there’s numerous cameos from many great characters in the film such as an early scene where Ralph attends a video-game bad guys anonymous meeting with villains from Pac Man, Street Fighter, Super Mario Bros., and Sonic the Hedgehog as well as many others. It adds to this very unique world that is very appealing to audiences that grew up playing video games as well as the evolution of video games from 8-bit to high-definition animation. Overall, Moore creates a truly exhilarating and imaginative film about a bad guy’s desire to be good and do good in the world of video games.

Editor Tim Mertens does brilliant work with the editing with its use of stylish rhythmic cuts as well as play into the energy of the action and humor that occurs in the film. Art director Ian Gooding does amazing work with the look of video game world from the sugary-confection of Sugar Rush to the dark world of Hero‘s Duty. Sound designer Gary Rydstrom and sound editors Frank E. Eulner and Marshall Winn do fantastic work with the sound with the way some characters move to the sound effects that is used in the games that the characters go to. The film’s music by Henry Jackman is superb for its mixture of orchestral-based music to play into the action along with some electronic and 8-bit music to help create that world of the video games while the soundtrack features contributions from Rhianna, Skrillex (who makes a cameo in the film), Owl City, Kool & the Gang, AKB48, and the video game novelty duo Buckner and Garcia doing the film’s theme song.

The voice casting by Jamie Sparer Roberts is incredible for the voice ensemble that was used as it features some notable voice work from Edie McClurg, Rachael Harris, and Raymond Persi as characters from Fix-It-Felix Jr. with Persi also voicing a zombie at the Bad-Anon meeting. Other noteworthy small voice roles include contributions from director Rich Moore as King Candy’s assistant Sour Bill/Zangief from Street Fighter, Horatio Sanz and Adam Carolla as the Sugar Rush police officers, Joe Lo Truglio as the drunk Hero’s Duty soldier Ralph meets at Tapper’s, Dennis Haysbert as the general at Hero’s Duty, Mindy Kaling as the Sugar Rush racer Taffy Muttonfudge, and Ed O’ Neill as the arcade owner Mr. Litwak whose character is sort of based on the Twin Galaxies arcade founder Walter Day.

Alan Tudyk is excellent as the Sugar Rush ruler King Candy who tries to get rid of Vanellope in the hopes that she doesn’t ruin the game while there’s an added layer to the character that makes him far more intriguing. Jane Lynch is fantastic as Sgt. Calhoun as a no-nonsense bug killer who helps Felix find Ralph and the cy-bug that entered Sugar Rush as she is baffled by Felix’s attraction towards her. Jack McBrayer is brilliant as Fix-It-Felix Jr. as a game hero who fixes everything with his magical hammer as he tries to find Ralph and get him back or else he and the other characters in the game become homeless.

Sarah Silverman is amazing as Vanellope Von Schweetz as this glitchy character who just wants to be in the race as she befriends Ralph where Silverman adds an energy to the character. Finally, there’s John C. Reilly in a remarkable performance as the film’s titular character where he brings that sense of humility and determination to his character making it one of Reilly’s best performance that is crucial to making Ralph a very unforgettable character.

Wreck-It Ralph is a phenomenal film from Rich Moore and Disney Animation. Featuring some dazzling visuals, a superb music soundtrack, and a brilliant voice cast, the film manages to do more than just be a kid’s film as it appeals to gamers as well. Largely as it features the world of the arcade as well as the different kinds of video games that has endured for more than 30 years. In the end, Wreck-It Ralph is a spectacular film from Rich Moore.

Me too. I had a whole lot of fun watching this as I am totally up for seeing the sequel.

I'm not a huge gamer and I even loved this movie. Sarah Silverman was my favorite actor in this, and she shows she has some real range as an actress/ Where was Skillrex's cameo is in this. I don't remember hearing any dub step in this.

@TheVern-Skrillex' cameo is in that Fix-It-Felix 30th Anniversary party scene where he's on the DJ booth and did the music for Hero's Duty. It was cool seeing his cameo though I'm not really into dubstep at all.

I'd call myself a pretty rabid gamer. This film... was just such a trip down memory lane. I'm glad you mentioned the fantastic soundtrack too! The score gives me chills whenever game central station is revealed.

@Ben Russell-I didn't like it. I loved it! It was so fun to watch. Even in seeing the villains be so cool and such. Especially Zangief.