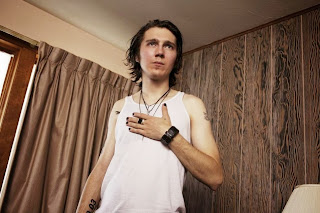 Written and directed by So Yong Kim, For Ellen is the story of a musician who deals with a custody battle for his daughter as well as his life as traveling musician. The film is an intimate portrait into the life of a young man trying to see his daughter while wondering if he is a good father. Starring Paul Dano, Jon Heder, Jena Malone, Shaylena Mandigo, Margarita Levieva, and Dakota Johnson. For Ellen is a touching yet harrowing film from So Yong Kim.

The film is a simple story about a traveling musician who arrives at a small town to finalize his divorce from his ex-wife as the documents he is to sign would have him lose custody of his daughter whom he doesn’t see. The film explores a young man trying to deal with everything he’s losing in his family life while he’s reaching a bottom over the fact that he is going to see his daughter even less since he and his ex-wife don’t get along. Though his lawyer tries to help, Joby Taylor (Paul Dano) realizes that he’s in a no-win scenario though he is able to get a chance to see his daughter. So Yong Kim’s screenplay is very minimalist as the first half explores Joby’s issues as he’s dealing with custody case and other things while the second half is about him spending time with his daughter but also realizes that she might not need him since her mother is going to marry someone.

Yong Kim’s direction is very simple as she goes for a lot of intimate shots and compositions while making things feel very real with bits of movement through the hand-held camera. A lot of it includes a lot of silent scenes where Joby deals with his situation as he’s also going through issues with his band and the fact that he’s losing something much more. While it’s a style that tends to drag a bit at times, it does play into the sense of loss that Joby is feeling as the film’s second half does pick things up a bit once he spends time with his daughter Ellen (Shaylena Mandigo) whom he gets to know while realizing that her life is going to change and such. Notably as Yong Kim’s direction creates some key moments that are heartbreaking to explore what Joby is losing. Overall, Yong Kim creates a very compelling yet tender film about a father dealing with the fact that he’s never going to see his daughter again.

Cinematographer Reed Morano does excellent work with the film‘s cinematography as it‘s mostly natural for much of the film‘s exterior settings though he aims for low-key lights and such for interior/exterior scenes at night. Editors Bradley Gray Rust and So Yong Kim do nice work with the editing as it‘s mostly straightforward with not a lot of cuts to convey Joby‘s emotions. Production designer Ryan Warren Smith does fine work with the minimal set pieces such as the home of his lawyer and the motel room that Joby stays in. Sound designers Ian Stynes and Geoff Vincent do terrific work with the sound to capture the atmosphere of the locations including some scenes at the bar and at the mall. The film’s music by Johan Johannsson is fantastic for its low-key ambient score to play into Joby‘s despair while music supervisor Rachel Fox creates a soundtrack that largely consists of hard rock and heavy metal as well as other types of music from acts like Whitesnake, the National, and the Beastie Boys.

The casting by Sig De Miguel and Stephen Vincent is superb as it features a mostly small ensemble that includes appearances from Dakota Johnson as a woman Joby meets a bar, Margarita Levieva as Joby’s bitter ex-wife Claire, and Jena Malone as Joby’s girlfriend Susan who appears very late in the film. Jon Heder is terrific as Joby’s lawyer Fred who is handling his case and just trying to figure out what Joby is going to do. Shaylena Mandigo is amazing as Joby’s daughter Ellen who is just very natural and low-key as a young girl who is just meeting her father while figuring out why he isn’t around much. Finally, there’s Paul Dano in a brilliant performance as Joby as a musician dealing with a custody battle where he realizes how much he’s going to lose as well as the fact that things in his music career isn’t going well as Dano brings an anguish that is just captivating to watch.

For Ellen is a stellar film from So Yong Kim that features a mesmerizing performance from Paul Dano. Though it’s minimalist approach won’t be for everyone, it is still an engaging film for the way it explores a young man dealing with his actions and what he is losing as he tries to fight to be with his daughter. In the end, For Ellen is an enchanting film from So Yong Kim.

So Yong Kim Films: (In Between Days) - Treeless Mountain

Yet another film I hadn't heard of, thanks Steven! Sounds like a good role for Paul Dano.

I only saw the film because Jena was in it but in a very small role late in the film but it was still worthwhile though I think Treeless Mountain by the same filmmaker is a much better film.

Great review! I'm a big fan of Dano, and I really enjoyed his work in this. I was surprised how decent Jon Heder was too.

@Brittani Burnham-I know. I'm not a fan of Heder though I did think he was really good in this film for just playing it straight.