2014 Blind Spot Series: The Birth of a Nation 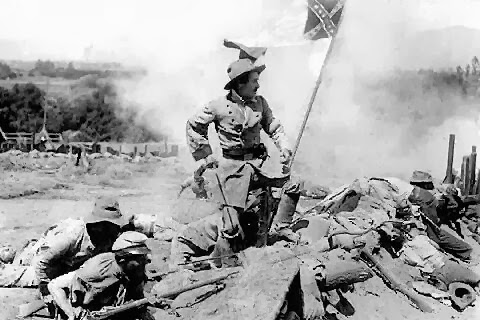 Based on the novel and play The Clansman by Thomas Dixon Jr., The Birth of a Nation is a film that explores the lives of two families from the North and South during the Civil War and the Reconstruction period. Directed by D.W. Griffith and screenplay by Griffith and Frank E. Woods, the film is a controversial look into the lives of families as well as the founding of the Ku Klux Klan as it was film lauded for its cinematic innovations but remains controversial due to its racial context. Starring Lillian Gish, Mae Marsh, Henry B. Walthall, Miriam Cooper, Ralph Lewis, and George Siegmann. The Birth of a Nation is a sprawling but very disturbing film from D.W. Griffith.

The film is a two-part story in the life of two families during the American Civil War and the Reconstruction period. Most of which plays into this sprawling story about the Stonemans of the North and the Camerons of the South as they were friends before the Civil War as the young men of those families would later fight each other in the Civil War. Two of those young men from different families would survive to see the period of Reconstruction in the South as Austin Stoneman (Ralph Lewis) would be part of the Radical Republicans who want to punish the South for the Civil War as he left his mulatto protégé Silas Lynch (George Siegmann) to take control of the small town of Piedmont where whites would lose power in favor of blacks prompting the young Colonel Ben Cameron (Henry B. Walthall) to form the Ku Klux Klan. It’s a film that is very controversial not just in how they portray the Ku Klux Klan as heroes but also in its depiction of African-Americans.

The film’s screenplay does have a unique structure in exploring the relationship between the Stonemans and Camerons as they were longtime family friends who just wanted to have a good time as Ben Cameron has fallen for the picture of Elsie Stoneman (Lillian Gish) whom he would carry for the Civil War. Ben would survive the Civil War as he would meet Elsie as she is a nurse as his life was spared from war crimes when his mother (Josephine Crowell) plead to Abraham Lincoln (Joseph Henabery) who would let Ben go as the Camerons would see Lincoln as a beacon of hope in the aftermath of the war. Instead, Lincoln’s death and Austin Stoneman’s plans for Reconstruction would take charge with Silas Lynch being its leader.

What would happen in the film’s second half is that Lynch would try to go after Elsie as she is already in love with Ben Cameron. It would create a sense of tension as Lynch would abuse his power and let uncivilized blacks run rampant while they treat their former owners in such abusive ways. A tragic incident in the Cameron family would prompt Ben Cameron to take action where he would later gain an ally in Elsie’s brother Phil (Elmer Clifton) who is in love with Ben’s older sister Margaret (Miriam Cooper). The formation of the Ku Klux Klan would lead to a climatic battle that is sprawling and epic but its idea of history and portrayal of the KKK as heroes does make the story seem not just ridiculous but also discomforting.

The direction of D.W. Griffith is very sprawling not just in the way he stages the battle scenes but also in the drama. Much of the direction in the drama is intimate with a lot of soft lenses and close-ups that are truly gorgeous in its compositions. There’s few moments where the camera moves but most of shots have the camera remain still with some amazing wide shots that showcases a depth-of-field in some of the film’s battle scenes where it has a sense of something that would create an idea of what an epic film should be. Along with some shots at night where Griffith uses a red palette to play into that chaos, he does create something that is truly memorable. For all of the film’s technical work and some ideas in his approach to the drama. Not everything in that film works as it relates to its depiction on African-Americans.

For African-Americans watching this film, there is no question that the depiction of their own race in the film is blatantly racist. Not just in they’re portrayal but also in the fact that much of its cast is played by white actors in blackface. The way Griffith believes they talk in the inter-title cards and how they behave once their free is very terrible. It seems like Griffith wants to say something into how ignorant and dim-witted they are once they’re free while the character of Lynch and a black soldier named Gus (Walter Long) showcase them as animals who are vile. It’s the aspect of the film that isn’t just offensive but really makes the film hard to appreciate for all of its technical brilliance and story. Overall, Griffith creates a fascinating but unsettling film about two families living during the Civil War and the Reconstruction period.

Cinematographer G.W. Bitzler does amazing work with the film‘s photography with its use of tinted colors such as the use of red to convey the chaos in some scenes set at night as well as other colored palettes in its black-and-white look to create something that is chilling. Editors D.W. Griffith, Joseph Henabery, James Smith, Rose Smith, and Raoul Walsh do excellent work with the film‘s editing with its use of rhythmic cuts and match-cutting as well as creating ideas that would be the basis for a lot of action films in the years to come. Costume designers Robert Goldstein and Clare West do nice work with the period costumes from the dressed the women wear to the uniforms the men wear. The film’s music by Joseph Carl Breil is fantastic for its flourishing score with its use of traditional American instrumental themes like Dixie and The Star-Spangled Banner while going for some broad string arrangements to play into its drama and action where the latter would feature Ride of the Valkyries in the film’s climax.

The film’s cast is remarkable for having actors play such real-figures at the time like Raoul Walsh as John Wilkes Booth, Donald Crisp as Ulysses S. Grant, Howard Gaye as Robert E. Lee, and Joseph Henabery as Abraham Lincoln. The performances of Walter Long as Gus, Tom Wilson as Stoneman’s servant, and Mary Alden as Stoneman’s mulatto housekeeper Lydia are very discomforting to watch since they’re played by white actors in blackface which adds to the sense of racism that is prevalent in the film as does the performance of Jennie Lee as the Cameron family maid as she is portrayed as a stereotypical black woman of those times. Other notable small roles include George Beranger and Maxfield Stanley as Ben’s older brothers, Robert Harron as Elsie’s brother Tod who would die in the war, Josephine Crowell as Ben’s mother, and Spottiswoode Aitken as Ben’s father who was once a man of importance until losing it all in the war and in the Reconstruction period. Miriam Cooper is wonderful as the eldest Cameron sister Margaret while Mae Marsh is superb as Ben’s youngest sister Flora who was full of energy as she hoped for Elsie to marry her brother.

Elmer Clifton is good as Phil Stoneman as a man who falls for Margaret as he realizes the severity of his father’s plans where he would help the Camerons in dealing with the carpetbaggers. Ralph Lewis is excellent as Austin Stoneman as a Senator who would lead the group of Radical Republicans only to realize he created a monster in Lynch. George Siegmann is alright as Silas Lynch in how crazed and demonic he looked but the fact that he’s playing a mulatto just makes the performance discomforting to watch as it’s also a form of blackface. Henry B. Walthall is fantastic as Ben Cameron as a man who adores his world as he tries to save his land from Lynch as he forms the Ku Klux Klan. Finally, there’s Lillian Gish in a radiant performance as Elsie Stoneman as a young woman who falls for Ben but is torn towards her loyalty towards her father and her devotion to Ben while being pursued by Lynch.

What a great film for a Blind Spot series. Boy I should've picked this one too. I just heard an interview from an author of a book about the KKK and this film was mentioned. I'm very curious to check this out. Thanks Steven.

I would definitely recommend it as a historical piece on cinema but there's elements about that is offensive.

I watched this in a film class back in the '90s, and I was stunned by both the technical excellence and just offensive it was. It's remarkable even when you consider the time period. Still, I think it's definitely worth seeing for its importance to the medium.

@Dan Heaton-That is exactly why I think people should see it. It might not be one of the greatest films ever but it is an important one as far as the history of motion pictures are concerned.

The reason to see this is for its place in cinema history. You have to put up the offensive story to do so. There are some impressive battlefield sequences. Some scenes, such as when a black man insists he has just as much right to walk on the same sidewalk as a white man, and the director clearly intends for us to be angered by that, just come across as silly now.

@Chip Lary-Yeah, there's elements of that film where if you see it now. It's clear how ridiculous some of it is and the scene where the newly-freed slaves who would run the Senate showcase how dumb they were and that wasn't funny at all.

Just wanted to say thanks for writing a January post! I’d leave a longer comment, but I’ve never seen Mother India myself – it’s a Blind Spot for me too.

@Ryan McNeil-Thanks. I enjoy doing this as well. I too haven't seen Mother India though it's not one of my blind spots for this year.

Okay, I know that this film is technically fascinating and stuff, and I did notice that when I watched it - but man, what a pain it was! Not only the racism, but the mere fact that it's a 3 hour silent film (or felt like 3h) is just unbearable to me. I really didn't enjoy watching it... but then again, I'm glad I've seen it.

@Mette-I didn't have issues with the length of the film but the racism was what bothered me. Still, I'm glad I saw it.

Great choice for a Blind Spot. "Superb yet terrifying..." yeah, that's a damn good description of this iconic film.

@Alex Withrow-How else would you describe a film like this? I've got another silent film and then 10 more Blind Spots to do for the year.