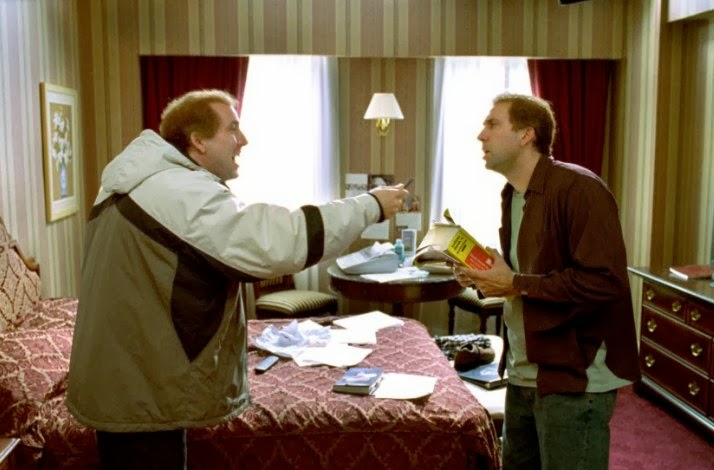 Directed by Spike Jonze and written by Charlie & Donald Kaufman that is based on the novel The Orchid Thief by Susan Orleans, Adaptation is the story of Charlie Kaufman’s struggle to adapt Orleans’ novel for a film project as he ends up putting himself into the story. The film is a multi-layered story that explores not just a screenwriter’s struggle but also showcase an author’s struggle in her book where she meets this eccentric orchid thief. Playing the Kaufman brothers in the film is Nicolas Cage while Meryl Streep plays Susan Orleans in this very strange yet largely dramatized world into the struggle that writers go through. Also starring Cara Seymour, Tilda Swinton, Maggie Gyllenhaal, Ron Livingston, Brian Cox, and Chris Cooper. Adaptation is a mesmerizing yet offbeat film from Spike Jonze.

Being a writer is tough as is being a screenwriter where the film doesn’t just explore the world of writer’s block but also the struggle in the art of adapting another person’s work. Even as the film is about Charlie Kaufman’s struggle to understand Susan Orleans’ book which is about Orleans trying to understand the work of this poacher named John Laroche (Chris Cooper) who steals these rare orchids in south Florida. The film not only explores Orleans’ meetings with Laroche which would lead to write her book as well as deal with her own emotional struggles. The film also showcases Kaufman’s struggle in trying to be faithful to the book as he deals with deadlines as well as twin brother Donald who wants to become a screenwriter where he manages to create a clichéd psychological thriller that sells very well.

The film’s screenplay by the Kaufman brothers doesn’t just explore Charlie’s struggles but also the sense of depression and self-loathing he’s carrying while he’s overseeing the production of Being John Malkovich which he wrote. It’s a film that has a lot of humor but it’s mostly dramatic where Charlie tries to write the screenplay where the narrative moves back-and-forth to Charlie’s struggles as well as the story of Orleans meeting Laroche and learn about his life while dealing with her own issues. It’s a narrative that has a lot of paralleling stories as well as voiceover narrations from both Orleans and Kaufman where it’s also a bit satirical at times when Charlie decides to attend a seminar by Robert McKee (Brian Cox) who discourages the use of voice-over narration.

Some of the film’s humor often involve Donald mooching into Charlie’s newfound success as he also wants to become a screenwriter as he would be the one to tell Charlie about McKee. Donald’s involvement in the story would be crucial for Charlie to not only to try to get in contact with Orleans but also ask her about the book. It would eventually lead into this very strange third act that not only reveals more about Orleans’ relationship with Laroche but also the latter’s obsession in why he wants to get these rare orchids. Notably as it would change the tone of the story into something much darker as it would also play into why Charlie had such a hard time understanding Orleans’ book.

Much of Spike Jonze’s direction is very straightforward since it is more of a straight comedy-drama with elements of meta-fiction and such. The scenes on the set of Being John Malkovich, where it features cameos from its stars John Cusack, Catherine Keener, and John Malkovich along with some crew members of that film, is one of the moments in the film that seems weird along with some of the fantasies that Charlie has in his head which includes women like Orleans, studio executive Valerie Thomas (Tilda Swinton), and a waitress he meets named Alice (Judy Greer). One element of weirdness in the film is the fact that there’s twin brothers in the film where Jonze manages to make great use of the split-photography for the brothers to interact.

Through the use of close-ups, medium shots, and wide shots, Jonze keeps things simple while going for something beautiful in the scenes set in South Florida where Laroche lives in as it is this exotic land that is sort of forbidden. There’s also a mix of something dark in the world as well as the presentation of Laroche as this ragged man who hangs around with Seminole Indians and lives in a trailer. The sense of meta-fiction and reality does collide where it does become a suspense film of sorts in the third act with bits of humor as it does lead to this climax where the Kaufman brothers discover the truth over Orleans’ relationship with Laroche. The result is a strange yet engrossing comedy-drama about a man trying to understand a woman’s book in the struggles of the idea of adaptation.

Cinematographer Lance Acord does amazing work with the film‘s cinematography from the lushness of the scenes set in Florida in its swamps as well as the scenes at the botanical gardens while much of the film is pretty straightforward. Editor Eric Zumbrunnen does excellent work with the editing in creating some unique montages and rhythmic cutting to play into some of the film‘s humor and drama. Production designer K.K. Barrett, with set decorator Gene Serdena and Peter Andrus, does fantastic work with the look of Orleans‘ New York apartment and the home of the Kaufman brothers as well as the ragged yet exotic world of Laroche. Costume designer Casey Storm does terrific work with the costumes where much of it is straightforward to play into the personalities of the characters.

Special makeup designer Tony Gardner does wonderful work with the look of the characters such as the look of the Kaufman brothers as well as the ragged look of Laroche. Visual effects supervisor Gray Marshall does some fine work with some of the film‘s minimal visual effects that involve some of the fantasies that Charlie has as well as some of the scenes in Florida. Sound designer Richard Beggs and sound editor Michael Kirchberger do phenomenal work with the film‘s sound in not just some of the scenes at the parties but also the layer of intimacy in the scenes at the swamps. The film’s music by Carter Burwell is marvelous for its quirky yet somber score that plays into the different moods of the film while the soundtrack consists a wide array of music from Beck, the Rolling Stones, Elvis Costello, and the Turtles..

The casting by Justine Baddeley and Kim Davis-Wagner is incredible as it features cameo appearances from John Cusack, John Malkovich, and Catherine Keener as themselves on the set of Being John Malkovich along with other notable cameos from filmmakers Curtis Hanson as Orleans’ husband and David O. Russell as a journalist from The New Yorker. Other notable small roles include Judy Greer as a waitress Charlie has a crush on, Litefoot and Jay Tavare as Seminole Indians who are friends of Laroche, Ron Livingston as Charlie’s brash agent, and Tilda Swinton as the film executive Valerie Thomas who is intrigued by Charlie’s pitch though has concerns over why he hasn’t finished the script. Maggie Gyllenhaal is wonderful as the makeup artist Caroline who dates Donald while helping Charlie to go to Robert McKee. Cara Seymour is excellent as Amelia as a woman Charlie falls for but is unable to express himself to her.

Brian Cox is fantastic as Robert McKee whom Charlie goes to for advice as Cox has this amazing presence as McKee where there’s no bullshit about him as he displays a lot about what is needed for good writing. Chris Cooper is superb as John Laroche as this eccentric yet intriguing orchid poacher who has this strange fascination for orchids as he invites Orleans into his world only for things to get even weirder. Meryl Streep is brilliant as Susan Orleans as this journalist/writer who is intrigued by Laroche only to become confused by his eccentricities as she would deal with her own issues and secrets. Finally, there’s Nicolas Cage in a remarkable dual performance as Charlie and Donald Kaufman. In Donald, Cage is more upbeat and energetic while he is much more somber and agitated as Charlie where Cage shows a lot of the struggle that Charlie goes through as it’s one of Cage’s best performances.

Adaptation is a phenomenal film from Spike Jonze and screenwriter Charlie Kaufman. Thanks to its amazing cast led by Nicolas Cage, it’s a film that doesn’t just explore the difficulty of adapting another person’s work but also in the way that source can be confusing at times. It’s also a film that also makes fun of the typical clichés into the world of writing while also not afraid to give in to those clichés. In the end, Adaptation is a sensational film from Spike Jonze.

Spike Jonze Films: Being John Malkovich - Where the Wild Things Are - Tell Them Anything You Want: A Portrait of Maurice Sendak - Her - My Mutant Brain

I think this is one of those films that I appreciate but not necessarily like. It was just so bizarre but I thought Cage was very good and the supporting cast was ace!

I had a hard time understanding it at first but as I re-watched it over the years and having written my own work. It's one of those films that I realized is absolutely smacked on about the difficulty of writing as well as the fact that it was willing to play into those cliches. As of now, I think it's Jonze's weakest work as a filmmaker but still a great film.

Though I enjoyed this film, the performances are great, I find it is the Spike Jonze film I revisit the least. I never seem to be in the right mood for it.

@Courtney Small-It's the one film that I don't think stick out with the rest of Jonze's work but it is still worth watching. Even as it is one of Charlie Kaufman's best scripts.

Just watched this again last night and you are right about Nicolas Cage being good in this. I know we like to give him a hard time but the man can make some really good performances when he is giving the right material. Great post

@Jason H-For all the crap that he's doing as of late. There's always a moment where he'll just act in a good film or work with a great director like Werner Herzog. It's now rare these days as the reason he's been making all these movies just to pay those taxes he didn't pay.