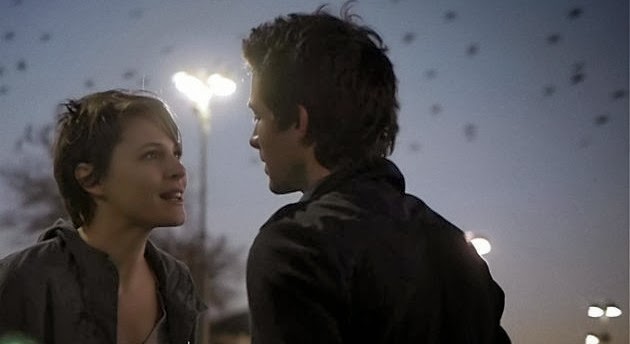 Written, directed, shot, scored, and co-edited by Shane Carruth, Upstream Color is a love story about two people whose lives are affected by an unknown parasite as they’re unaware of what is happening to them. The film is a complex tale revolving around the lives of two people as they are bewildered by their surroundings as well the parasite that’s affected them. Starring Shane Carruth and Amy Seimetz. Upstream Color is an unusual yet exotic film from Shane Carruth.

The film is about a woman who was kidnapped and drugged by an unknown parasite as she loses everything where she connects with a man who seemed to have been afflicted by the same trauma as they deal with their surroundings. It’s a film that doesn’t have any kind of conventional plot though it does have a traditional narrative structure. Yet, it plays into the lives of two people afflicted by the experience of this unknown parasite as the first act is about a woman named Kris (Amy Seimetz) who is tasered and drugged by a thief who controls her to do things where she loses everything. A year later in the second act, she meets Jeff (Shane Carruth) who is divorced and was once a broker as he now works in a low-level job. The two begin a romance where they connect in strange ways but demons of their past would haunt them as they would try to find the answers in the film’s third act.

Shane Carruth’s direction is truly mesmerizing in the way he conveys many of the images from his approach to framing and his emphasis on naturalism for many of the exterior scenes. Especially as Carruth uses surrealism to play with the story as if Kris and Jeff are unsure of what world they’re living in as they’ve been deeply affected by the parasites that were once in their bodies. Even in scenes where Carruth would match the actors in a frame in one scene with another one to play into that world of surrealism. There’s a lot of aspects of the film that plays like a strange guessing game as it includes the presence of a strange man (Andrew Sensenig) who is always recording natural sounds and taking care of pigs.

Serving as the cinematographer, co-editor, and music composer, Carruth adds a sense of naturalism to his images including lingering shots of nature as well as some very ethereal images of worms and parasites into the bodies. With the help of David Lowery, Carruth’s editing has this offbeat sense of rhythm and tone that plays into that feeling of uncertainty where it does become very effective in many of its dramatic moments. There‘s also elements of sci-fi in parts of the story where it is supported by Carruth‘s very intoxicating ambient-drenched score that plays into that sense of loss and confusion. Many of the images showcase Carruth’s strength as a filmmaker and as a storyteller where he doesn’t need to rely on dialogue and exposition to tell the story. Especially as he refuses to define the film into any genre as it is so much more in the way he conveys people dealing with trauma and loneliness. Overall, Carruth crafts a very ravishing yet enthralling film about two people who are connected by strange circumstances.

Production designer Tom Walker does amazing work with the look of the homes and hotel rooms that Jeff and Kris venture into as Walker also does some of strange visuals of the parasites and their effects into the body. Sound designer Johnny Marshall does brilliant work with the film’s sound as it is truly a work of art in terms of sound editing and mixing where it is this amazing collage of natural sounds meshed with one another as it is one of the film’s major highlights.

The casting by Kina Bale is fantastic as it features some notable small roles from Thiagos Martin as the mysterious thief who controls Kris in the film’s first act and Andrew Sensenig as the pig farmer/sound recorder who raises pigs while experimenting with the parasites on those pigs as he is a unique character. Shane Carruth is excellent as Jeff as this man who is trying to deal with failure as he is connected with Kris while trying to comprehend the repressed rage that’s been burning inside of him. Amy Seimetz is incredible as Kris as this woman who went through a traumatic experience as she becomes lost as she finds herself entranced by bizarre moments as she would be the one to look for clues into what is happening to her as it’s a very mesmerizing performance.

Upstream Color is a truly rapturous and seductive film from Shane Carruth that features a remarkable performances from Amy Seimetz. The film is definitely unlike anything that is out there while not being afraid to be unconventional and offbeat. Even as it blends all sorts of genres to get people engaged into a story as bizarre and surreal as it is though it does have some very compelling themes. In the end, Upstream Color is a magnificent film from Shane Carruth.

I wish I would've loved this film as much as you did. I was just kind of baffled when I got done watching it. Like "what the fuck was that?"

Films that don't have any kind of conventional plot or any kind of plot will be baffling but I was wowed by it and I began to realize what it was going to be about and more. I know it's not for everyone but I certainly enjoyed it.

I'm happy it wowed you. I still don't know what to make of Upstream, maybe it's a masterpiece. I loved the ambient soundtrack.
Remarkable Shane Carruth did so much in the production. He can't have slept a lot during the making :)

Great review :) I loved Upstream Colour. It's one of my favourite films from 2013, and one of the most original movies to come out in recent years. Glad you liked it too!

@Ben Russell-Thank you. I'm glad you enjoyed it as well.