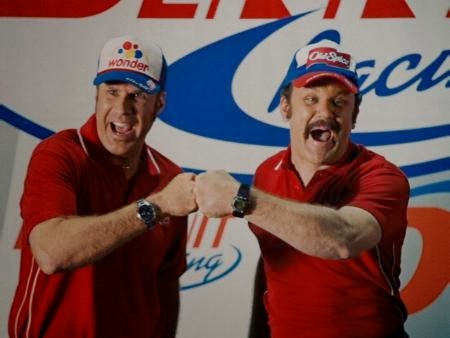 Directed by Adam McKay and written by McKay and Will Ferrell, Talladega Nights: The Ballad of Ricky Bobby is about NASCAR driver whose life of winning and having everything is ruined by the arrival of a Formula One Frenchman who destroys Ricky Bobby's world as it would take those who really care for him to get him back on top. The film is another exploration of a buffoon who is forced to deal with reality as well as he also deals with abandonment issues with his father as Will Ferrell plays the titular character. Also starring John C. Reilly, Amy Adams, Gary Cole, Jane Lynch, Sacha Baron Cohen, Andy Richter, Leslie Bibb, David Koechner, Molly Shannon, Pat Hingle, Greg Germann, and Michael Clarke Duncan. Talladega Nights: The Ballad of Ricky Bobby is a hilarious comedy from Adam McKay.

The film is a simple story about a man who always wanted to be a NASCAR racer after his father Reese (Gary Cole) gave him advice when he showed up one day at school for career day. For Ricky Bobby, he would take his father's advice where he would become the king of NASCAR while having his friend Cal Naughton Jr. (John C. Reilly) be his racing partner as they become the duo known as "Shake N' Bake". With lots of money, the best pit crew ever, a hot wife named Carley (Leslie Bibb) and two kids in Walker (Huston Tumlin) and Texas Ranger (Grayson Russell), Ricky seems to have it all. Yet, issues with his fathers and the arrival of former French Formula-One racer Jean Girard (Sacha Baron Cohen) would ruin things for Ricky until his father and a few others would help Ricky regain his confidence. It's a film that doesn't have much of a plot but it does have a lot of silliness as well as a bit of satire into the world of NASCAR.

What makes Talladega Nights appealing is that the same brand of humor that was in Anchorman is that director Adam McKay and co-writer Will Ferrell understands what is funny. While they chose to not bring in a very strong plot that is predictable to more cynical audiences. McKay and Ferrell just go for the comedy and let the story win its audience thanks to an abundance of great characters and a structure to the screenplay that is very well-handled in its simplicity. The comedy however, is more improvised while the scripted moments works to convey the story. The result is that McKay manages to bring enough humor to balance some of the more hearty moments concerning Ricky's abandonment issues with his father. Plus, McKay's vision of NASCAR isn't to satirize or to give scope to its culture other than the fact that it's an event many people including families love to go to. To see cars race against each other despite some of its violent moments involving crashes.

Helping McKay in his extraordinary vision is cinematographer Oliver Wood who brings some wonderful coloring to the film's exteriors, notably the NASCAR scenes while giving the film a real sense of style and intensity to the race scenes. Production designer Clayton Hartley and art director Virginia L. Randolph do great work of exploring the world of NASCAR with its array of bars, Southern upper-class and lower-class homes, and most of all, the location of Applebee's. Costume designer Susan Matheson does great work in the look of the drivers like Ricky's Wonderbread jumpsuit, Cal's Old Spice suit, and Jean's Pierre suit. Editor Brent White brings a wonderful pace and rhythm to the editing, especially when timing its comedic moments that allows the audience to savor a funny moment and have the time to laugh. Sound editor George H. Anderson also does great work in conveying the loud atmosphere that is NASCAR.

The film's music is filled with an array of country, Southern-style music, and metal courtesy of composers Anthony Short and Alex Wurman. The soundtrack is a mix of stuff like Monster Magnet, AC/DC, Buckcherry, Journey, Pat Benetar, and a lot of classic rock. Overall, it's a fine soundtrack while some songs, notably a Pat Benetar will never be the same once they're heard. I should also note that during the crazy credits, watch out for John C. Reilly and notably, Michael Clarke Duncan doing some singing.

Finally, there is the film's cast which is way bigger and funnier cast than the people Ferrell and McKay assembled for Anchorman. With cameos from the like of several NASCAR-related broadcasters plus NASCAR drivers like Darrell Waltrip and Dale Earnhardt, Jr., and hilarious small performances from Molly Shannon as Larry's drunk wife, Andy Richter as Jean's dog-trainer husband Gregory, director Adam McKay as the driver Ricky replaces, Jason Davis as a Waffle House manager in the career-day scene, and unspoken cameos from Elvis Costello and Mos Def. Ferrell/McKay regular David Koechner doesn't get much to do as one of the pit crew yet manages to make a memorable, funny small appearance as does Ian Roberts and Jack McBrayer who say some funny lines. Pat Hingle is also good as the prideful Dennit while Jake Johnson and Luke Bigham are excellent as the young Ricky and Austin Crimm as the young Cal.

Houston Tumlin and Grayson Russell as Walker and Texas Rangers are very funny boys as they're given some of the film's funniest and filthiest lines as you just can't beat two little boys saying mean things about their grandfather. Greg Germann is also good as the corporate, heartless Larry who thinks nothing about making money while manipulating the minds of Cal and Carley for his own gain. Leslie Bibb has some funny moments as Carley while doing some fine work as the wife who cares about nothing but being rich and having it all while looking hot. Fresh off her Oscar-nominated performance in Junebug, Amy Adams is even hotter, I mean hot like FIRE-HOT! as the sweet, caring assistant Susan. Though Adams doesn't appear much, her performance is great, notably in the third act as she proves her comedic talents while looking very hot as she does a great job while leaving the audience wanting more of her.

Jane Lynch is very funny as the supportive, moralistic Lucy Bobby who is the perfect Southern mama with a bit of an eccentric side while she's the kind of mama you don't mess with. Lynch is memorable in every scene she's in while being very funny. Gary Cole is extremely funny as the drunkard, wild, and less moralistic Reese who may not be a great father or the role model that Ricky needed. Yet, Cole makes him interesting and very funny as a man who doesn't know how to be a dad yet becomes a great mentor for Ricky when he's down. Michael Clarke Duncan has a small role yet he's great in his role as the cautious, caring Lucius while delivering some of the film's funnier moments, notably in the final credits which you have to hear and see to believe. Sacha Baron Cohen, known to people as Ali G or Borat, gives one of the most hysterical and freakiest performances on camera. Cohen does a great, slimy French accent who has a taste for jazz, cappuccinos, books, and saying Ricky's name as "Y-ree-kee Boo-bee" while providing the right kind of match that Ferrell needed as the scenes they have are gold.

Ok, the Best Supporting Actor of the Year. Hands-down goes to John C. Reilly, who some say is this generation's Gene Hackman. Well, like Hackman, Reilly can't suck. Reilly is the perfect sidekick that Ferrell needed by just being very dim-witted, supportive, and deliver some of the film's funniest, improvisational one-liners while having some great chemistry with Ferrell. Reilly really brings a lot of the comedy and buddy-aspects of the film as it's one of his best performances since Reilly gives depths and laughs to a character like Cal Naughton, Jr. as Reilly is also riding high in Robert Altman's A Prairie Home Companion. Will Ferrell delivers in what is sure to be, another classic performance as Ricky Bobby. Ferrell is very good when he's playing dumb or ignorant while he's so great whenever he's in a desperate moment like running in his underwear, saying Grace to the Baby Jesus, crying about his daddy, or just racing. Ferrell is comic gold as he just delivers a performance that is magnificent and a character that is complex like Ricky Bobby.

OMG! Did you just say that Reilly would be your pick for Supporting Actor of the year? HE WINS THE FISTI!!! Holy fuck! I thought I was the only one who worshiped his hilarious performance here. He was ON FIRE and just blew the year out of the water. Seriously...look at my awards page for the aughts. He's my winner! Love this movie...my favorite Will Ferrell film and one of the funniest films of the aughts, period.

At the time when I wrote this review back in 2006. Yes, I did. Now, I think would change that idea though his performance was on fire in this film. I think he is still is the best supporting performance that year. He was just so much fun to watch. "Don't let the invisible fire burn my friend!"

I love this film though I think Step Brothers remains the crowning achievement of the McKay/Ferrell/Reilly team.