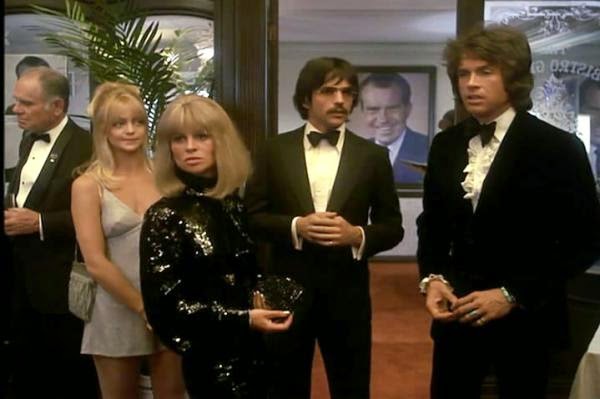 Directed by Hal Ashby and written by Warren Beatty and Robert Towne, Shampoo is the story of a hairdresser who deals with his own issues on commitment while seducing many of his female clients in Los Angeles. Set in the span of 24 hours during Election Day in 1968, the film is an exploration into a man dealing with his own identity while his world is starting to change in the course of an entire day as it‘s loosely based on the life of a renowned hairdresser Jay Sebring who would be one of the victims of the infamous Tate-LaBianca murders by the Manson Family. Starring Warren Beatty, Julie Christie, Goldie Hawn, Lee Grant, Tony Bill, Carrie Fisher, and Jack Warden. Shampoo is an exhilarating and chaotic film from Hal Ashby.

Set in the day of the life of hairdresser George Roundy (Warren Beatty) on what is a very crucial day in American history that is Election Day 1968. The film plays into a world where a man’s often carefree life of doing women’s hair and fucking them starts to finally blow up as he faces his own identity as well as the fears in growing up and being committed to someone. Especially as he has a girlfriend in aspiring actress Jill (Goldie Hawn) while sleeping with a rich woman in Felicia (Lee Grant) whose husband Lester Karpf (Jack Warden) is having an affair with one of George’s former lovers in Jackie Shaw (Julie Christie) who still has feelings for George. In the day, George is working on Felicia and Jackie’s hair while trying to get a loan so he can start his own hair salon as he feels unappreciated by his boss Norman (Jay Robinson). Yet, it all comes to ahead through a couple of parties later in the night as it’s not just Roundy’s life that starts to fall apart but also the reality that is to come upon Richard Nixon in becoming the President of the United States of America.

The film’s screenplay by Warren Beatty and Robert Towne doesn’t just explore a man’s life starting to fall apart in a day where things are about to come to an end. It’s a film where a man is trying to grow up but he often succumbs to his own trappings in sleeping with women throughout the course of an entire day. Upon George’s own turbulent journey in juggling his affairs and work, there’s a lot that is happening as Jill just got a job offer that could help her as she befriends producer Johnny Pope (Tony Bill). While George deals with Felicia and Jackie, he would also have an encounter with Lester and Felicia’s 19-year old daughter Lorna (Carrie Fisher) who hates her mother. All of which plays into his own failings as a man and it would eventually start to blow up in a crazy night where he is invited by Lester to a dinner that Jackie, Felicia, and Jill attend with Pope as Jill’s date.

The screenplay also features some racy dialogue such as Jackie’s own drunken desires at the dinner while the script features this sense of foreboding as the world of free love and drugs is starting to come to a dark end. Especially as Lester is a conservative who has a lot of connections to the Nixon campaign though he is aware of politics’ fallacies while he would also encounter a party with hippies as he realizes that they’re not so bad. Yet, it’s an encounter that would also reveal more about George’s own issues with commitment as his own world starts to fall apart. After that climatic party, George not only faces himself but also the realities that are lurking as it becomes clear how distracted he is in his own bullshit and not knowing about the other people in his life. Even as he also deals with the world of women as it becomes clear that he still has a lot to learn about them.

Hal Ashby’s direction is very compelling for the way he creates a world where the characters are unaware of what is about to happen on Election Night and what is to come in the coming years. It plays into this sense of dramatic irony as the audience know what is coming as it would play into a sense that an end of an era is happening for George Roundy. Much of the film is set in Los Angeles where it plays into a world where the rich and established collide with the more idealistic youth culture as Ashby does create something where the two different cultures seem to try and get to know each other during Lester’s encounter with hippies as he decides to loosen up a bit and not worry about his reputation. Ashby infuses a lot of offbeat humor into these situations as well as the dinner-party scene where it is about a celebration of what is to come but it features a moment that showcases how absurd it is.

The direction also has Ashby use some very inventive framing devices in the way he puts his actors into a frame. Some which involve an actor in the background while the other is shot in a near close-up where the actor in the background is obviously listening or wanting to do something. There’s also moments in the framing where there’s these intricate crowd scenes as it’s shot in a wide frame where the main characters are in the background or in the middle of the frame in a medium shot to play into the sense of chaos they’re in. All of which plays into Roundy’s own messy life as its ending is him trying to come to terms with his life and what he wants to do. Especially in who he wants to be with where it’s an ending full of irony where even though he says that he wants to grow up and live a normal life. It is clear that he is more likely to screw things up and live the same life that he knows. Overall, Ashby creates a very witty yet tender film about a man’s life falling apart in the span of an entire day.

Hair stylist Jan Van Uchelen and hairdresser Kathryn Blondell do terrific work with the design of the hair styles and cuts some of the women characters would sport to play with what George is creating Sound editor Frank E. Warren does superb work with the sound in the way some of the music is presented as well as the radio and television as it would play into the sense of foreboding in the film‘s political climate. The film’s music by Paul Simon is wonderful as it’s a very low-key piece that is only used sparingly to play into George’s melancholia with its simple folk-based sound. The film’s music soundtrack includes pieces by the Beatles, the Beach Boys, the Jimi Hendrix Experience, Buffalo Springfield, the Monkees, Herb Alpert, Jefferson Airplane, and the Cookies as it’s all played on location to capture that period in time.

The casting by Jane Feinberg and Mike Fenton is incredible as it features a few cameo appearances from Michelle Phillips of the Mamas & Papas, co-writer Robert Towne, and Howard Hesseman as partygoers in the psychedelic party, Jay Robinson as George’s worrisome boss Norman, Ann Weldon as a salon co-worker, and in her film debut, Carrie Fisher as Lester and Felicia’s daughter Lorna who would have a few tricks up her sleeve as a way to react her hostilities towards her mother. Tony Bill is terrific as the producer Johnny Pope who tries to help Jill with her career while being a very good guy though he is mistaken by Lester as George’s boyfriend. Jack Warden is excellent as Lester Karpf as this rich businessman with all sorts of connections who offers George the chance to run his own salon while dealing with his own marriage to Felicia as well as his affair with Jackie as it’s role that is a bit comical but also a bit serious.

Lee Grant is amazing as Lester’s wife Felicia as she is one of George’s many lovers as she is very demanding while becoming tired in her marriage where her discovery about the things in her life starts to show her acting out. Goldie Hawn is brilliant as George’s girlfriend Jill as this insecure and neurotic aspiring actress who is unsure about the part she is to get as she also starts to question about the state of her relationship with George until she makes her own discoveries. Julie Christie is fantastic as Jackie Shaw as this very posh woman who is torn in her devotion for Lester and her feelings for George as she starts to unravel about the decisions she’s making. Finally, there’s Warren Beatty in a phenomenal performance as George Roundy as this very immature man who is good at his job but the years of sleeping around with women and such has made him lose sight of things as he wants to become a responsible adult but has so many issues that prevents him from doing what is right as it’s Beatty at his most vulnerable.

Shampoo is a remarkable film from Hal Ashby that features great performances from Warren Beatty, Julie Christie, Goldie Hawn, Lee Grant, and Jack Warden. Along with a great script from Beatty and Robert Towne as well as witty commentary on a world that is changing through a sex-obsessed hairdresser. The film is definitely of Ashby’s finest films as well as showcasing a period in time where many of the behaviors and attitudes of the 1960s would start to fall apart in a much bleaker decade. In the end, Shampoo is a spectacular film from Hal Ashby.

Hal Ashby Films: The Landlord - Harold & Maude - The Last Detail - Bound for Glory - Coming Home - Being There - Second-Hand Hearts - (Lookin’ to Get Out) - (Let’s Spend the Night Together) - (Solo Trans) - (The Slugger’s Wife) - 8 Million Ways to Die

I wish that I could have loved this more, but I felt so disconnected from it, aside from the great actressing by Christie and Hawn. I should give it another go though.

While I don't think this film is as good as most of Ashby's other films in the 1970s. It is still quintessential for the fact that it explores a world that is changing and people being unaware of the dark times that are coming while this buffoon in Warren Beatty is an immature schmuck who wants to change but is full of contradictions and vices that prevents him from changing.