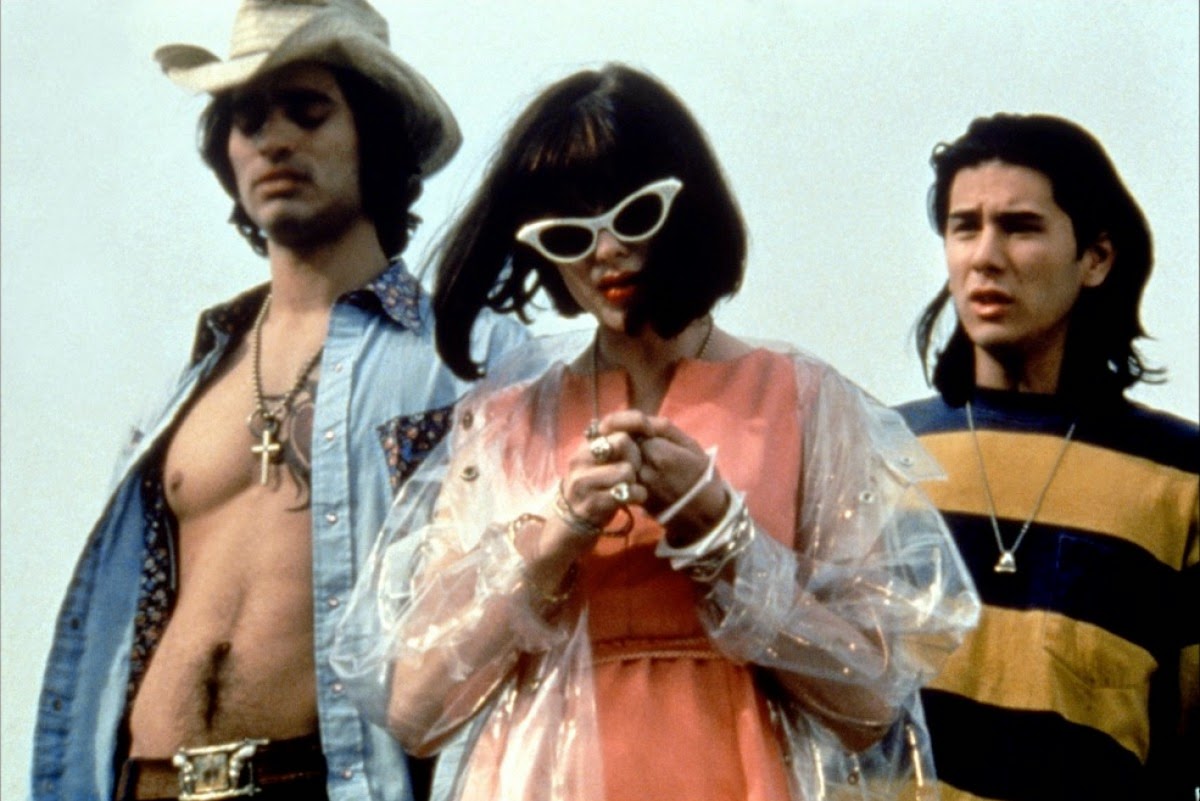 Written and directed by Gregg Araki, The Doom Generation is the story of two teenagers who go into a road trip with a drifter as they encounter all sorts of strange things in their journey as well as moments of violence. The second part in Araki’s Teenage Apocalypse Trilogy, the film explores a world where two teens and a young drifter deal with their existence and the world around them. Starring Rose McGowan, James Duval, and Jonathan Schaech. The Doom Generation is a thrilling yet stylish film from Gregg Araki.

The film is an unconventional road film where two teen lovers find themselves in all sorts of strange and violent situations where they’re joined by this young drifter who would save them from these situations as he is attracted to the young teens. Yet, it’s a film that doesn’t play towards any kind of conventions since the young woman Amy Blue (Rose McGowan) is a biting cynic who really despises everything and often says “fuck” while her boyfriend Jordan White (James Duval) is more easy-going about everything as well as being very open about new experiences. Upon meeting Xavier Red (Jonathan Schaech) who was being beaten by a gang, the three go in this road trip where Amy despises Xavier yet doesn’t mind having sex with him while an attraction between Xavier and Jordan also appear in this strange love triangle that emerges. Still, they would encounter all sorts of strange individuals in their journey as Amy is mistaken for another person while everything they buy in various places always cost a total of $6.66.

Gregg Araki’s screenplay doesn’t play into any kind of conventional structure in the course of the film yet it does have a lot of stylized dialogue that often features a lot of profanity as well as some obscenities that would often irk Amy. At the same time, there’s a sense of melancholia and despair that looms into the three as they all come from dysfunctional homes and feel like they don’t really belong anywhere. Especially as they have no idea where they’re going or how to cope with the realities of the world they’re in while being baffled by some of the stranger things that surrounds them. Some of which involve people who are oddballs or those that feels like they come from another world that Amy, Jordan, and Xavier have no clue about.

Araki’s direction is quite stylish in terms of the compositions he creates as well as his approach to the film’s humor. Much of the humor is very offbeat as it wouldn’t just feature celebrity cameos but also into the world of pop culture that the characters are at. Much of it shot in Southern California where it does feel like a world that has a sense of the unknown while being meshed with an alternative culture that is quite removed from the mainstream. Araki would also do things to play into the discovery of sex as Amy and Jordan start the film off trying to lose their virginity as they would later discover through its powers while there’s some scenes that will definitely provoke reactions. One scene which includes elements of voyeurism and bodily fluids as it is Araki just wanting to gross people out yet also showcase that sense of fascination as far as sex is concerned. It is balanced by some of the darker elements of the film where the violence is quite gruesome as it would play into the film’s very intense climax where the trio deal with a group of sadistic Neo-Nazis. Overall, Araki crafts a very sensational and provocative film about three lonely people going on a road trip to nowhere.

Cinematographer Jim Fealy does brilliant work with the film‘s cinematography with its use of colorful lights for some of the film‘s nighttime interior/exterior scenes as well as some low-key look of the daytime exterior scenes . Editors Gregg Araki and Kate McGowan do amazing work with the film‘s editing with its stylish approach to jump-cuts and montages while creating offbeat rhythms in the cutting as it adds to the film‘s unconventional tone. Production designer Therese DePrez, with set decorator Jennifer M. Gentile and art director Michael Krantz, does fantastic work with the set pieces from the look of the motel rooms the characters stay in to a bar where they get themselves into trouble as it has this offbeat tone to the strange reality the characters are in.

Costume designer Catherine Cooper-Thoman does terrific work with the costumes as it is quite stylish in the clothes that the characters wear as well as the people they meet. Sound mixer Mark Weingarten does superb work with the film‘s sound to capture some of the moments that goes on in many of the film‘s locations and such. The film’s excellent soundtrack is supervised by Peter Coquillard who brings in a wide mix of music ranging from electronic music, shoe gaze, industrial, and noise-rock from such acts as Nine Inch Nails, Ride, Slowdive, the Jesus & Mary Chain, Meat Beat Manifesto, Lush, Front 242, God Lives Underwater, Medicine, Cocteau Twins, Aphex Twin, Porno for Pyros, Coil, Curve, and many others plus some ambient music pieces by Dan Gatto that often appears in a few of the locations that the characters encounter.

The casting by Joseph Middleton is incredible as it features cameo appearances from Perry Farrell and Heidi Fleiss as a couple of store clerks, Amanda Bearse as a barmaid, Lauren Tewes and Christopher Knight as a couple of news reporters, the industrial band Skinny Puppy as a bunch of guys trying to beat up Xavier early in the film, Dustin Nguyen as a convenience store clerk, Margaret Cho as the clerk’s wife, and Don Galloway as a FBI agent leading the manhunt to find Amy and Jordan. Other notable appearances in the film include Nicky Katt as a fast-food cashier and Parker Posey as a mysterious woman who would both mistake Amy as someone else as it adds to the film’s offbeat tone.

Jonathan Schaech is great as Xavier Red as this very off-the-wall and antagonistic individual who is full of charm and wit as he also proves to be resourceful to the group. James Duval is fantastic as Jordan White as the sensitive and very open teen who finds himself attracted to Xavier while dealing with the situations in a calm way. Finally, there’s Rose McGowan in a brilliant performance as Amy Blue as this young woman who is quite fiery and often cynical as she feels like the world has nothing to offer as it’s a role full of energy and charisma.

The Doom Generation is a remarkable film from Gregg Araki. Armed with superb performances from Rose McGowan, James Duval, and Jonathan Schaech as well as some stylish cinematography and a kick-ass soundtrack. The film is definitely one of Araki’s most abrasive films but also one of his most compelling in the way he explores the sense of despair that looms around teenagers during the mid-1990s. In the end, The Doom Generation is a phenomenal film from Gregg Araki.

Well, that's one of things I love to do. Plus, I hadn't seen that film in several years as it was a film I loved as a teen and was wondering if it holds up despite the fact that it was a truncated version of the film as I do remember the stuff they cut out. Yet, I think Gregg Araki's best film is Mysterious Skin.

I really like this film as well. Araki is so frank in his depiction of sexuality, but it's always essential to his story. A rarity in today's cinema.

I'm excited for White Bird in a Blizzard

@Alex Withrow-Araki is a master in knowing how to use sex to drive the story as he doesn't sugar-coat while also being quite provocative. I really hope the whole Teenage Apocalypse trilogy comes to Criterion as I'm also excited for his new film.