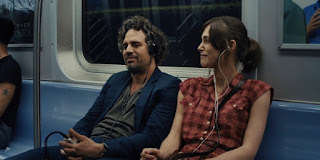 Written and directed by John Carney, Begin Again is the story of a struggling music executive who finds a young singer-songwriter as the two collaborate on making an album through various locations in New York City. The film is an exploration into two people who both endured failures and disappointments as they try to do something together to express their love for music. Starring Mark Ruffalo, Keira Knightley, Catherine Keener, Hailee Steinfeld, Adam Levine, CeeLo Green, Mos Def, and James Corden. Begin Again is a touching and enjoyable film from John Carney.

The film revolves around a music executive who is down on his luck as he stumbles into a club where he hears a song from a young woman as he wants to sign her to his label and make her album. While it is a simple story of two people who both endured moments in their life as they’re down on their luck as they find something that brings them together through the love of music. For the music executive Dan Mulligan (Mark Ruffalo), he wants to find something that matters regardless if it sells or not as he was once a great music producer whose life has not gone well and has a shaky relationship with his daughter Violet (Hailee Steinfeld). For Gretta James (Keira Knightley), she’s a singer-songwriter still stinging not just from the break-up of her musician boyfriend Dave Kohl (Adam Levine) who cheated on her. It’s also in the fact that really cares about the music and learns that Kohl has sold out in order to become part of the machine.

John Carney’s screenplay has a unique structure where its first act is about Dan stumbling into the club meeting Gretta who reluctantly sings in a club after being prodded by her friend/musician Steve (James Corden). It plays into what Dan and Gretta were doing on the day before they meet as well as the latter and her relationship with Dave. Most notably in how it fell apart when Dave returned with a new song where Gretta learned that he cheated on her. The second act is about Dan and Gretta collaborating to make the album as Dan reluctantly produced himself as he is aware that he’s not getting any support from his label nor his business partner/label head Saul (Mos Def). With a group of several unknown musicians and Steve, Dan would record Gretta’s album on any location as they’re eventually aided by Violet in a means to reconnect with her father. It’s third act isn’t just about the reality of the music industry but also about Dave who returns to meet Gretta as it becomes clear how much he’s changed as it plays into what Gretta wants for herself and her music.

Carney’s direction is very simple as it plays into the wonders of New York City and how music fills that world where Dan and Gretta are eager to make use of its many locations and record whatever they can flesh out musically. Much of it involves a lot of hand-held camera movements with lots of close-ups and medium shots as Carney doesn’t really go for anything big. Yet, he does manage to find moments that are engaging such as Gretta and Dave’s break-up scene where it is about the song that Dave created and their reactions which has Gretta very upset. Carney also creates moments that are lively not just in the outdoor sessions where Dan is recording Gretta and her band but also in a moment where the two walk around New York City listening to music from their earphones. It is all about the love and power of music where Dan would also reveal why things with him and Violet hadn’t been easy until he invites her to play on Gretta’s record where it is this cathartic moment. The scenes involving Dave and the results of Gretta’s record doesn’t just play into some of the cynical realities of the music business but also what music is supposed to be for the artist rather than what Dave and Saul represent. Overall, Carney creates an exhilarating film about two people who find salvation through their love for music.

Cinematographer Yaron Orbach does excellent work with the cinematography from the naturalistic yet colorful look of the scenes set in the day to the usage of lights for the interior/exterior scenes at night. Editor Andrew Marcus does nice work with the editing as it‘s straightforward with some stylish jump-cuts and montage cuts to play into its energy and humor. Production designer Chad Keith, with set decorator Kris Moran and art director Anne Goelz, does fantastic work with the look of the apartments Steve and Dan live in to play into their personalities as well as the massive loft apartment Dan and Gretta lived in where things were good.

Costume designer Arjun Bhasin does terrific work with the costumes as it‘s mostly casual with the exception of the rich designers suits that Saul and Dave wear. Visual effects supervisor Yuval Levy does good work with the minimal visual effects that is used which includes an acceptance speech Dave does that Gretta and Steve see on YouTube as well as an inspiring scene of what Dan sees in Gretta‘s performance. Sound editor Lewis Goldstein does superb work with the sound to capture every layer of the music as it‘s presented on location as well as the atmosphere of the clubs and other venues.

The film’s music by Gregg Alexander is amazing as it‘s a very low-key yet melodic-based score that features elements of folk and pop while music supervisors Matthew Rush Sullivan and Andrea von Foerster bring in music from Stevie Wonder and other artists yet it’s the originals song by Alexander, John Carney, Glen Hansard, and other writers that is the heart of the film as it includes Lost Stars and other songs that Knightley would sing as well as the songs that Levine sings.

The casting by Jeanne McCarthy is brilliant as it includes notable small roles from Cee-Lo Green as rapper Troublegum who helps Dan find musicians and Mos Def (under his real name Yasiin Bey) as Dan’s old friend and business partner Saul who tells him about why he can’t help Dan because of the changes of the music business. Catherine Keener is wonderful as Dan’s ex-wife Miriam who is surprised by Dan’s recent enthusiasm as she would later help him in making Gretta’s album. Adam Levine is superb as Gretta’s ex-boyfriend Dave Kohl who became successful despite the things he had done for her as he copes with not just success but also the fact that he has made a lot of compromises for the music he and Gretta made in the past for the sake of commercialism. James Corden is fantastic as Gretta’s friend Steve who is a street musician who not only helps Gretta cope with her break-up but also to get her to play music again as he would also help Dan in the recording of her album.

Hailee Steinfeld is excellent as Dan’s daughter Violet who isn’t just dealing with growing pains but also not having her dad around as she copes with his frequent absences until she is asked to join his project where she reveals her brilliance as a musician to her father. Keira Knightley is remarkable as Gretta James as a songwriter who just loves to make music as she copes with her ex-boyfriend and his success as well as the need to make music that is true and honest while Knightley shows she can really sing. Finally, there’s Mark Ruffalo in a marvelous performance as Dan Mulligan as a once-famous producer turned music executive who experiences some bad luck until he hears Gretta’s song where he collaborates with her as a way to make something that is meaningful again as Ruffalo brings a lot of humor and some great chemistry with Knightley.

Begin Again is a phenomenal film from John Carney that features great performances from Mark Ruffalo and Keira Knightley. The film isn’t just about the celebration of music but also in the idea of how music can mean so much to people in an age where purity is being coerced by commerce. In the end, Begin Again is a sensational film from John Carney.

I love this movie so much! It was such a little gem and Ruffalo and Knightley were spectacular. Great review!

So glad you liked the film! Both Ruffalo and Keira were wonderful and it's a shame the movie didn't get more recognition during Award season, Lost Stars totally should have won

Great review man. I know you had your reservations about the movie, but I'm so happy you gave it a shot and ended up liking it. I absolutely adore this movie.

@Brittani-Thank you. I was surprised by it as it was a film that played into everything that I liked about music and the things that I don't like about it.

@Sati-Knightley's version of "Lost Stars" is amazing as opposed to the other versions. Keira I think was overlooked and should've gotten more recognition as she and Ruffalo were just great to watch.

@Alex-Thanks. That scene you mentioned was spot on and I was surprised in how Levine sold that slap.